I am so excited to interview our own Debra Webb!

It seems appropriate somehow that I’m interviewing Deb on Veterans Day. Her husband, Nonie, is a veteran (thank you Nonie!) who served in the U.S. Army. By the way, they have been married for 36 years. And no, she doesn’t look old enough to have been married for 36 years—they married when she was 16. They met at her father’s 50th birthday party when Nonie was guest of one of their farmhands. Deb saw him and said to herself, “That is the most handsome man I’ve ever laid eyes on.”

After the birth of daughter #1, Deb went back to college. When Nonie was stationed in Berlin, Deb took a position with the commanding general’s office. Once back in the States she worked for NASA in the space shuttle program. Not only is Deb a talented writer, but she’s smart too!

Deb’s first book was published in the Precious Gems line in 1999—it was called UP CLOSE. She had 7 Precious Gems books, 75 Harlequin novels (over 50 are Intrigues!), and 6 single title romantic suspense with St. Martin’s Press. Her December 2010 book, COLBY CORE, will be her 88th full-length novel.

But today I want to talk about Deb’s Harlequin Intrigue series, The Colby Agency.

I asked Deb how she keeps the series fresh, both for herself and her readers. She said, “I try really hard not to write the same story twice. Even if the plot has some similarities, like a missing child, I try to shake it up a little with a new twist or a different type of character that I haven’t written before.”

One of the problems in a long-running series like Deb’s is dealing with characters aging. “I try to keep story time as close to real time as possible. If a child was born five years ago, I keep him about five years today.” Sometimes she has to fudge the years, but readers haven’t minded—it’s always relevant to the story.

“The theme of these two Colby books is ‘A Christmas Miracle’ and I love to incorporate the holidays into my stories,” Deb said. “They are about missing children, and while missing children stories have been done many times, I tried to do something a little different to give the reader a new way to look at the story.”

Starting in April 2011, Deb is releasing a back-to-back Colby Agency trilogy: MISSING, DAMAGED and BROKEN. “This trilogy will launch a whole new cover design that signifies it’s a Colby Agency book. Though I haven’t seen the changes, I’m very excited about the re-design.” 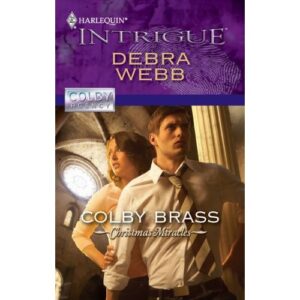 As a Colby agent, Trinity Barrett is one of the best at finding the missing and delivering justice. He hasn’t confronted a challenge he couldn’t handle with ease—until now. To locate an abducted child and bring her home safely, he must team up with Equalizer Evonne Cassidy…his ex-wife.

Launching a dangerous search in Chicago’s underbelly is not Evonne’s biggest obstacle—partnering with Trinity is. They’d managed to keep their history a secret, but in close quarters they can’t deny the passion that still connects them. And if there’s any hope for a Christmas reconciliation, they’ll first have to survive their risky assignment….

COLBY CORE comes out the first week of December. 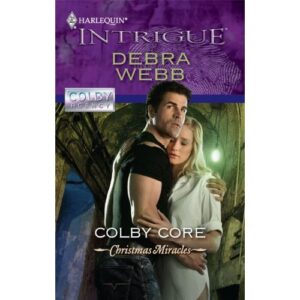 After years in captivity, waiting for a rescuer who never came, Tessa Woods meets a mysterious stranger who’s determined to help bring down a human-trafficking ring and save the other victims…including her child. But can she put all her dreams of a merry Christmas into the hands of a handsome agent?

Colby agent Riley Porter thinks being a former SEAL has prepared him for anything. When he goes undercover to find Tessa, he doesn’t expect his professional mission to become personal. Yet caring for the brave, passionate woman who’s ready to risk her life to end an evil cycle is far beyond his control. As the danger escalates, Riley must convince Tessa to do the impossible for their own survival: trust him to protect her.

If you have never read a Harlequin Intrigue before, start with these two by Debra Webb. I’m certain you’ll be entertained and quickly turning pages–and eagerly awaiting her Spring trilogy!

Deb has had ups and downs in this business like every other writer on the planet, but this last summer at the RWA conference one of the worst things that could happen to a writer happened to Deb.

She lost the use of her arm.

The accident wasn’t Deb’s fault, but she’s the one who is paying the price. She told me I could now share with the Murder She Writes faithful how devastating this injury has been. She does physical therapy—in and outside the home—four to five hours every day in the hopes of regaining use of her arm and hand. The doctors believe that she’ll gain up to 90% use of her arm—after years of physical therapy—but her hand will never be fully healed.

Deb’s accident would be devastating to anyone, but for a writer it’s particularly tragic. She’s currently writing one-handed because she didn’t want to change her process and learn the new Dragon Speak software while in the middle of a book. (I can SO relate to that!) When she’s done, she’ll load and train the software so she can speak instead of type. But there’s a learning curve involved, and it’ll take time and hard work—and a lot of physical and emotional pain—to persevere.

If anyone can do it, it’s Deb. In fact, she’s maintaining her intense book schedule even though it’s painful, because she knows that for a writer, time off is not possible. If you disappear for a year or two, it’s impossible to pick up where you left off. It helps that Deb loves telling stories and has a wonderful supportive family, but that doesn’t make the battle any less difficult.

I asked her how she has kept such a positive attitude—because when I talked to her on the phone, she still sounds like the happy, warm, compassionate woman I have grown to love since I first met her in 2005.

She said, “I had my cry and I’m done crying. There are people far worse off than I am. My oldest daughter was born with great physical challenges. She has a rare genetic disorder that affected the muscles around her joints. Everything was physically harder and more painful for her, but there is no one I know who is stronger or kinder or harder working. She is my hero.”

Deb then told me about a reader letter that touched her so deeply that—after ten years with the same editor—was the only reader letter she ever forwarded.

“A woman recently wrote to me that she read my first Colby Agency book in September of 2000 and loved it. Shortly after, she lost her eyesight and was totally blind. The doctors ran tests and didn’t have any ideas on how to cure her. Several years later, they felt a new surgery would give her back her eyesight. Though it didn’t return immediately, eventually she could see again and the first thing she did was start reading. And the first book she read was book two in the Colby Agency series. She had asked her sister to buy the books when they came out, and she has the entire series and wants to read them in order.”

Deb grew teary-eyed when she read what the fan wrote. “She said, ‘The stories and characters have lived in my heart all these years, and I couldn’t wait to get back to them.”

Deb is not only a prolific and talented writer, but a wonderful person. I know I’m not the only one hoping she has many more stories to tell!

Trivia question: This is a hard one, but the winner gets copies of both new Colby Agency books. Even if you don’t know they answer, give a shout out to Deb and tell her you’re thinking of her!
What are the names of the hero and heroine in the very first Colby Agency book?