It’s a tough job, but somebody’s got to do it.

I volunteered to be a victim. Yes this is my foot.

This was my second role playing adventure. About five weeks ago, I participated in a tactical training as a “bad guy”–or, more accurately, as the white trash wife of a drunk pedophile who was harboring his cousin the pimp and the pimp’s underage girlfriend in the house. I learned a lot from the day–and even picked up the term “Mental Muscle” from my new pal in the Air Force, Tyler, who played “Billy” the pimp. It’s a phrase I’ve already used in ORIGINAL SIN, I loved it that much. (Basically, you practice and drill and run exercises until you can do it right the first time, on “instinct” and without hesitation.)

Yesterday’s drill was far more extensive than my first time. And for me, as a writer, it was even more valuable than the first.

Descending upon the former McClellan Air Force Base in Sacramento, California were seventeen SWAT teams from local law enforcement in Northern California. Run by the FBI and supervised by FBI SWAT Leader (and all around great guy) Brian Jones and run by the joint task force. (I believe this because the SWAT officers supervising the drills were from both the FBI and other law enforcement. But however they did it, it was very well orchestrated.) The teams were there for extra training, and could pick four of eight realistic scenarios (such as a sniper, officer down, and my drill–a school shooting.)

Just to set the stage: there were 250 SWAT guys in 17 teams, plus about 30 running the drills and 20 of us as “role players.” Role players come from interns in law enforcement, students in criminal justice classes, and people like me, graduates of the FBI citizens academy.

My scenario was a school shooting. I was a non-ambulatory but stable victim. Others had more serious injuries, or less serious injuries. The purpose of the drill was to put SWAT in a real-life, real-time situation (without real ammunition–they use paint pellets, but they hurt I’ve been told!) in order to train with “real” victims. One trainer said that role players are invaluable because when they run situations like this with just a shooter, once the shooter is down, they’re done. In real life, there is far more going on–clearing the scene, triage, civilian panic, etc. So the drill was two part–secure the scene, then deal with the victims until EMT arrives. SWAT is not extensively trained in triage, though many SWAT members are former military or have some basic medic experience. But handling a downed soldier is far different than a panicked civilian.

We were staged at various positions throughout the “school.” There were serious (abdomen) injuries and less serious injuries. And my pal Larry had a small “boo-boo” on his face that he declared loudly and often was bleeding and he needed medical attention now. I was placed in a doorway where I had a visual of a girl being “gunned down” as SWAT rounded the corner. I was told to scream until I was hoarse, and that if anyone touched my injured leg I was to scream in pain. Only two SWAT teams of the six actually touched the wound (and yes, I did scream in “pain.”)

As a side note, every SWAT team is a bit different in how they approach the scene and, for my purposes, how they handled triage. Two teams actually bandaged my GSW in the field with gauze and tape. One put a tourniquet around my thigh, but didn’t touch the wound itself (so I didn’t scream at him.) Two teams had me put pressure on my wound with my hand. One got me up quickly and into a staging room within the “school” (as opposed to the medic staging area outside the “school”) and had me sit until everyone with more serious injuries were dealt with. Of the six teams, two secured a room for victims, and four took the victims from the scene starting with ambulatory, then moving to non-ambulatory–most serious injuries first.

Triage after area is secure

Okay, another aside–hands down, if you’re ever held hostage in Northern California, you want Citrus Heights SWAT to be in charge of your rescue. Though I was the last victim to be removed from the scene, it was the smartest move (in my opinion) because I had a non-lethal injury. They were fast, they knew what they were doing, and they WERE IN CHARGE. They did not hesitate, they lit the shooter up, they quickly cleared the rooms (ALL the rooms) and assessed injuries without debate. Kudos to them! (All the teams did well, but this one just stood out head and shoulders above the rest. The last team that did the drill was above average as well, but I don’t remember who they were. It was late.)

How does playing these games help me as a writer? I know it’s not real, so while I’m excited and have a shot of adrenaline when gunfire ensues, it’s hard for me to know exactly how I would react in a real situation because my mind knows it’s not real. The only hint of what I’d really do (if I wasn’t given a verbal “script” to follow) would be to hide. When the first gunshot rang out, my instant reaction was to crawl into the room I was blocking and curl up in the corner. Make yourself a small target. But then I thought, what if someone I loved was injured? I think back to my oldest daughter’s surgery when she was two and I realize I would probably do what I did then–be a big girl, calm, collected, in charge, and then when I knew she was okay, break down in tears.

But the point is, everyone reacts different to the stimulus–not only the victims (some compliant, some panicked; minor injuries and major injuries)–but the SWAT teams. As a writer, the most valuable part of the exercise was not the scenario itself (though that was the most fun and the most exciting!) but the walk-through. After the drill, the trainers walk through with the team and ask them what they were thinking, why they did this or that, how they decided which formation or tactic to use, etc. As a role-player, I got to listen in to the conversations and heard first hand what they were thinking and why they did what they did. What’s running through their mind has me thinking what runs through the minds of my characters when placed in hostile or dangerous situations. These are trained cops–they are not idiots. They know what they’re doing. But sometimes they hesitate because of things we might not think about.

Such as liability. Two of the teams mentioned liability as a point of hesitation in firing upon the shooter. Because if he survives, he may sue. And if he doesn’t survive, his next of kin may sue.

I really had to think about that. I asked about it, and one true story that emerged related to an EMT unit. They were sued because they didn’t tend to a severely injured suspect during a shooting–where the scene was still hot–and instead tended to a downed officer. The suspect died and the next of kin sued saying the EMT should have treated them on scene. Fortunately, the case was dismissed because the code says that if a suspect has not been searched and cuffed, EMT are not required to give medical attention. And because the scene was hot (meaning there were still bad guys out there) there was no way for law enforcement to get to the suspect, search and secure him, and get him to the EMT in a safe zone. Considering that a bad guy might have a gun, might take a hostage, and was seen shooting a cop . . . well, the rule makes sense.

There are a lot of gray areas. Do you shoot a guy who’s holding a gun to his head? Do you leave the wounded in order to secure a scene? When do you shoot and when do you hesitate? SWAT is trained extensively on knowing how to identify the bad guys, but today one civilian was shot (grazed) because he pulled out his cell phone as SWAT came through the main doors.

We all know cops who are assholes. Who wear authority like a right to be worshipped. Some should be forced to resign because they give the majority of good cops a bad name. But watching them in action you realize that the choices they face on a daily basis might give them the right to a little bravado. They face life and death choices every day. In traffic stops that far too often go bad. In school shootings where they are facing victims and shooters who could be the same age as their own children. In robberies, car jackings, break-ins, kidnappings, rapes and murders. They’re the ones who tell a mother her son was killed; they’re the ones who step into a hostile domestic violence situation to try to diffuse it; they’re the ones who usually are first on scene at an accident or murder. They are not only responsible to keep themselves alive, but their partner. Not just their partner, but other cops. Not just other cops, but innocent by-standers. The rights of criminals are–rightfully–protected by our Constitution. But cops deserve the same rights and consideration as the bad guys. And, frankly, a little bit more. They’re putting themselves on the front lines to protect people like us, to protect our rights to life, liberty and the pursuit of happiness. And in doing that, many are shot, killed, disabled. So I’ve cut them a little slack when I see the attitude, because honestly? They deserve it.

Next up, I’m going to Quantico in September. I could tell you it’s research for the Lucy Kincaid series (which it is) but I had the trip planned before I sold the series, so it’s also because I think it’s going to be a blast. I can hardly wait! 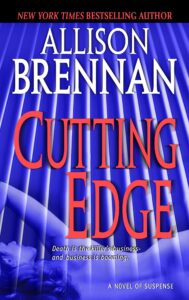 Now, to be perfectly selfish . . . CUTTING EDGE went on sale this week. This is the third book in my FBI Trilogy and the spark of the idea came from the domestic terrorism presentation during the FBI Citizens Academy. A special agent discussed a case he worked where there was an FBI informant in a domestic terrorist cell (eco-terrorism) and his respect and admiration for the informant really hit me. It got me wondering why would someone become an informant? Who are they? What do they grow up to do? Who do they become? How does it affect them . . . not just being an informant, but betraying people they know and care about? What, if any, life-long repercussions are there? And asking myself those questions, I came up with Special Agent Nora English.