Historical romance author Lavinia Kent and I wrote a series of weekly articles on the television series ARROW for USA Today’s “Happily Ever After” blog. (You can read them through the USA Today archive.) We started in the middle of season three, and plan to continue for season four. (As a side note, I’ll most likely also be writing about iZombie, my new favorite show!)

The weak season 3 finale notwithstanding, I really love ARROW and it’s one of my favorite shows. This was really driven home to me this summer as I watched seasons 1 and 2 again with my daughter who’s home from college. I look forward to the show each week not just because it has great characters and stories and action, but because of the writing. ARROW writers are among the best in the business and I willingly let them take me along for the journey – even when they seem to be going down a path I question. But so far (except for the season 3 finale) they’ve come through each and every time. 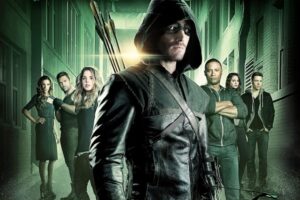 If you haven’t seen the show, in a nutshell it’s a DC Comics universe creation focusing on billionaire Oliver Queen who was stranded on an island for five years and everyone presumed he was dead. While on the island, he learned to survive (among other things!) and when he returned, became a vigilante to protect his city and make amends for the sins of his father—his father’s dying wish.

Oliver Queen becomes the Arrow, and over the course of three seasons goes from being a solitary vigilante who kills the bad guys to working with a team of people and killing only when absolutely necessary.

I love crime shows (Law & Order: SVU; The Blacklist; Bones; Castle; etc.) but because I write crime fiction, sometimes the shows hit too close to my own style and therefore do little to help me improve my storytelling. So even though I don’t write graphic novels or action adventures, there are three reasons why ARROW is the perfect show for my muse.

Character. Hands down, this show has terrific and complex characters. No one is all good or all bad. (Well, some of the villains are caricatures, but the recurring villains like Deadshot are far more complex and believable.) They’re flawed and make mistakes and have victories and failures.

Choreography. One of the most difficult aspects of writing is creating an action scene – or even a multi-character dialogue – and having it make sense to the reader. On screen, the director can show the action—the chases and fight scenes and roundtable discussions. But in print, we have to give the reader a few more clues so they can picture it in their head. Hands down, I’ve learned more about choreographing my action scenes and my group scenes by watching ARROW than any other show or book.

strong>Conflict. The best conflict stems organically from character. When two characters are both right – but on opposite sides – the story itself is far more dynamic. In addition, when characters who should be on opposite sides can work together for a common goal, the results are usually fabulous. ARROW creates believable and complex conflict better than any other television show. 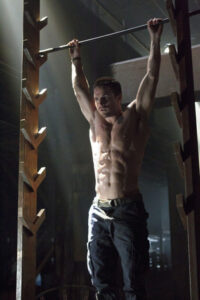 And, of course, watching good television is also fun and relaxing! Seeing Stephen Amell work-out in the Arrow Cave isn’t much of a sacrifice, either.

Do you watch ARROW? My favorite season so far was the second because while season three had some better individual episodes, season two had superior storytelling and the better over-arching storyline AND pay-off. Season three almost did … but the pay-off wasn’t half as good. I felt they resolved the conflict too easy at the end of season three when the build up had been so strong.

Thoughts for season 4? The big baddie is likely Damian Darhk and the organization H.I.V.E. — and hopefully we’ll find out why H.I.V.E. hired Deadshot to kill John Diggle’s brother Andy, and who was behind it. 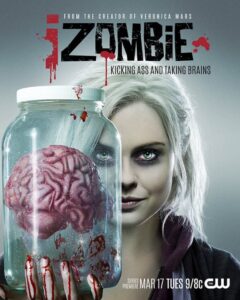 On another note, have you seen the new CW release, iZOMBIE, by the creator of VERONICA MARS? I love it! If you haven’t seen it … WATCH IT. It’s fabulous, season two will start mid-season, and it’s only 13 episodes. I guarantee you’ll love it – especially if you’re a writer. Some of the best storytelling out there today.

Of course, you all know I’m a TV addict. This summer, my son and I are binge watching THE WALKING DEAD – we’re almost done with season three and expect to be done with season five before the season six premiere (so no spoilers!) In addition to ARROW and iZOMBIE I’m looking forward to many shows, especially GRIMM because the season 4 finale totally and completely rocked.

What about you? Watch ARROW? Have you seen iZOMBIE? What show are you most looking forward to this fall?