I mark the sign of my favorite shows as those I not only look forward to every week, but those I dread the season finale not only because I’ll miss the show, but because I know something is going to happen and it’s going to be devastating to the characters and — more importantly! — to me. Using that criteria, the two shows that I now mark as my favorites are ARROW and WALKING DEAD.

If you want to catch up on ARROW, Lavinia Kent and I publish an article every Friday evening over at the HEA blog. This week’s summary is here. “Broken Hearts” brought back the absolutely fabulous actress who played Carrie Cutter, aka “Cupid.” But like with most ARROW episodes, there were double meanings galore, including the relationship between Oliver and Felicity.

WALKING DEAD gets the same reaction from me. I look forward to this episode every week (though my son and I watch it on Mondays instead of the day it airs.) This entire season has been building up to introduction of the dastardly Negan — played by none other than Jeffrey Dean Morgan. 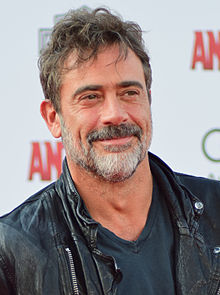 But I get away from myself.

WALKING DEAD is not about zombies or violence or gore — though there is that. WALKING DEAD is about people. Survivors. It’s about what good (and bad) people do when the world has changed. I care so much about what happens to the characters not only because I know that bad things happen to good people, but because I know that this show will not spare anyone. Everyone is at risk. Everyone is in jeopardy. Our favorite characters may die. Or worse.

Every writer should watch THE WALKING DEAD because it is, at its core, about character. And it’s only gotten better. After a rough sophomore season, I’ve been hooked, and it’s a rare show that can continue to surprise me.

And, well, Negan is coming. Next week.

What is the one show that you love and you squirm? You love it so much and care so much about the characters that you can’t wait for next week? That the season finale leaves you in a state of permanent anxiety until the next season?