Today I’m at Left Coast Crime in Sacramento — the best thing about this conference is that it’s local! No airfare, no hotel. I’m “commuting” each day (Ok, that’s kind of bad, I really hate commuting!) But I’m definitely all about penny pinching now, especially since my oldest is going off to college in the fall … so commuting it is.

Checking in with you all may be a bit haphazard, so in light of Deb’s great blog about endings last week, I thought I’d talk about beginnings.

For me, beginnings are the hardest part of writing. Where to start? In what POV? How much do I need to say about my series character? How can I entice new readers but not make current readers bored?

Sometimes, my first first line stays for the entire draft, editing, and revision process … like in IF I SHOULD DIE:

Guilt led him down the dark, cold passage many times that winter.

Other times, I write and rewrite the first line and almost always it comes to me much later and I go back and fix it. In fact, with SILENCED, the original first chapter was moved to later in the book, and I wrote a completely new opening during revisions. Here’s the opening line:

The whore traitor lived in a secure building with live cameras and nosy neighbors.

The opening line in the prologue of THE INFORMATIONIST by Taylor Stevens completely hooked me:

This is where he would die.

I greatly enjoyed this book–definitely “unputdownable” and introducing a terrific and original heroine.

Most readers give the author a couple pages, so perhaps relying so much on the first line or first paragraph isn’t important. But the opening passage sets the tone and expectations. In STEIN ON WRITING by editor Sol Stein, he wrote that he did a reader experiment by walking into a bookstore. He was certain that readers read the first 3-5 pages before making a purchase decision. He watched during a lunch hour and was stunned by the results: Almost without exception, if the reader pulled a book out, read the opening page, then turned the page, they bought the book. Readers who read the opening page but didn’t turn the page, put the book back on the shelf.

Even if you’re not so quick to judge, it’s clear that the first few lines are pivotal. 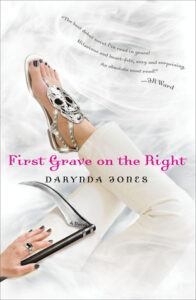 One of my favorite books of 2011 was Darynda Jones‘ debut FIRST GRAVE ON THE RIGHT. From the cover and title, you know what you’re getting, and the opening paragraph clinches the deal:

I’d been having the same dream for the past month–the one where a dark stranger materialized out of smoke and shadows to play doctor with me. I was starting to wonder if repetitive exposure to nightly hallucinations resulting in earth-shattering climaxes could have any long-term side effects. Death via extreme pleasure was a serious concern. The prospect led to the following dilemma: Do I seek help or buy drinks all around?

Darynda has a strong and compelling voice–fun, sarcastic, witty, fresh. Is it any wonder that she’s a DOUBLE Rita finalist with this book?

J.D. Robb opens every book with a wowza of a one-liner, which immediately conveys tone and character.

While a late-summer storm bashed against her single skinny window, Lieutenant Eve Dallas wished for murder. — NEW YORK TO DALLAS

A late-night urge for an orange fizzy saved Nixie’s life. — SURVIVOR IN DEATH

For him, death was a vocation. Killing was not merely an act, or a means to an end. It certainly was not an impulse of the moment or a path to gain and glory.

Death was, in and of itself, the all. — CREATION IN DEATH

So pull out the book you’re reading or one you just finished and share the opening line. Does it do the book justice? Have you read the author before or is this a brand-new reading experience? Everyone who plays today will be put in the “hat” for a chance to win a $25 gift certificate to the on-line bookseller of your choice … AND (drum roll) an early copy of SILENCED.