I read this article in the Wall Street Journal and it really hit home. I posted it on Facebook, but found that I had more to say about the subject.

On Saturday, my daughter who will be 11 on March 25th had her birthday party. Twelve of her friends from school, plus a couple family friends, came over to play in our yard with a bounce house and slide I rented. It was a beautiful day. My mom commented how delightful all the girls were–they were polite, friendly, happy, answered when spoken to, and while they were waiting for ice cream cake, they sat around the table singing songs from their upcoming 4th/5th grade school play (at the top of their lungs, but all in key!)

I was having a conversation with my mom and best friend Trisha, who has two little girls on the verge of turning 7 and 3, about kids. We talked about how “bossy” my oldest daughter was. Trisha was the oldest child, and concurred that they (and only children like me) tend to be “bossy.” Her older daughter was, my older daughter was. My mom commented about how Mary could be “bossy” when she was around her friends, and I concurred. Mary likes being in charge.

We didn’t mean anything by the conversation, and the kids weren’t in the room — though I’ve certainly told my girls to “stop being so bossy.”

I’m making a vow to stop that right now.

Words matter. As an author, I spend a lot of time finding “just the right word” especially when there’s a special nuance I want to convey. Words have power. The oft-quoted, “The pen is mightier than the sword” is true on many levels — yet how many wars were started because of words? The Declaration of Independence is a carefully crafted document that was the final straw, giving courage and authority to our new country to battle the British Empire.

Social scientists have long studied how language affects society, and they find that even subtle messages can have a big impact on girls’ goals and aspirations. Calling a girl “bossy” not only undermines her ability to see herself as a leader, but it also influences how others treat her. According to data collected by the National Longitudinal Study of Adolescent Health, parents of seventh-graders place more importance on leadership for their sons than for their daughters. Other studies have determined that teachers interact with and call on boys more frequently and allow them to shout out answers more than girls.

When I was pregnant with my oldest, I read a lot of “how-to” books because, well, I was 24 and wanted to make sure I did it right! (I learned that all the good books contradicted each other much of the time, so I tossed them all.) One thing that stuck out to me was the admonition not to compare children to each other or other family members. For example, if you have a crazy Aunt Sally, when your daughter is behaving crazy, don’t say, “You’re just like your Aunt Sally.” Or if your brother Uncle Horace is in jail for assault, when your son plays too many video games don’t say, “You’re going to end up like your Uncle Horace.”

We don’t overtly insult our children, but sometimes it comes out in the words we use, usually without thinking.

When I read this article about the “Ban Bossy” campaign, I was immediately reminded about the Pantene commercial that ran in the Philippines. And as I always do when I watch this one-minute video I wonder Why isn’t this running the United States?

Then I realize that it is — on YouTube, on blogs like this, shared via Twitter and Facebook and all the other social media (at no charge to Pantene.) Wow. Fantastic marketing campaign! But I digress.

My husband and I both worked in the Capitol at the same time in different areas. I had a battle with one of the chiefs of staff–he was new, I told him he couldn’t do something because it was illegal, he did it anyway, I went over his head to my boss who then talked to his boss who then chewed him out and told him to listen to me. This colleague went to my husband and said, “I guess we know who wears the pants in YOUR family.”

This, just for doing my job.

I believe in letting things roll off my back. I don’t take offense to what people say about me. When I was in politics, I made enemies — largely because we had different opinions. In writing, you can’t take reviews personally because usually the reviewer didn’t mean to be cruel, they just used the wrong words. Or they did mean to be cruel, and they’re just a jerk. Sometimes, we place too much meaning on words to the point of making bad cultural decisions. Removing Huckleberry Finn from school reading lists because it uses the offensive “N” word is wrong.

And sometimes, people take offense just so they can play the victim. I want to tell people to get a thick skin. We’ve all been the subject of verbal attacks. 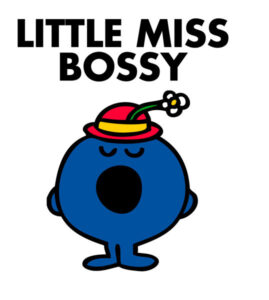 At Huffington Post, someone responded to the “Ban Bossy” movement with their own suggestion: Embrace Bossy.

We need a campaign full of vinegar that actually makes a difference. And we need to be scared of nobody and domineering to get stuff done.

I don’t disagree with her. I’ve never apologized for being opinionated or independent. I am who I am.

However, sometimes a label is so branded in our collective psyche that we don’t realize that maybe using the word has impacted generations of children. Maybe some of perceptions of women in power — conservative and liberal, from Sarah Palin to Hilary Clinton to Tammy Bruce — is because automatically people are turned-off because they are the “bossy girls” they disliked in school. Maybe it’s how we treat or “correct” the bossy girls that creates the problems in the first place.

“Ngram shows that in 2008 (the most recent year available), the word appeared in books four times more often to refer to females than to males.”

I’ve called my son Luke a “know-it-all” and realize it’s the boy version of “bossy.” First, Luke IS smart and does know more about some things than his peers. He loves math and reads science magazines for fun. But sometimes he’ll extrapolate incorrectly and come to an erroneous conclusion that he believes is fact, hence the “label” I’ve put on him. I’ve said this to his teachers who tell me that Luke is a leader among his peers and is just growing into a leadership role.

My daughter Mary is the same as Luke. She does very well in school and like Luke doesn’t enjoy group projects unless she’s the one leading the group. She gives the orders, she doesn’t take them very well. No one has told me she’s growing into her leadership role.

On the flip side, my introverted daughter Kelly, now a high school senior, hates group work for other reasons. She’s smart and likes being responsible for her own grades, and doesn’t like it when those more forceful (more bossy?) take over the group and direct it, dismissing her suggestions and ideas. She would rather do the work on her own and earn the grade on her own merits than work in a group and depend on others for her final grade. She wants the A or the C all on her own. She’s learned to speak up when it really matters to her, but she dislikes conflict so is often simply agreeable because she doesn’t want to take on the “bosses.”

I suspect that the “bossy” label has come about because young female leaders aren’t given the tools in school to focus their leadership talents. They don’t know how to listen because they have all the answers (and they probably do–but the key to a strong leader is to listen to those around you, then make the best decision using the talents of your team.) Girls that grow up to be in positions of power often do it against all the odds, and they develop a tough and sometimes rough shell that solidifies the impression that they are a bitch rather than a leader.

The best boss I had when I worked in the Capitol was a guy. As long as I got my work done correctly and on time, he was happy. My worst boss? A girl. My female boss was a workaholic, divorced with two kids, who didn’t understand–couldn’t understand?–that I had to leave at five every day to pick up my kids from day care. I always took work home with me. I always met my deadlines. I did a great job. Yet she told me I had to get my priorities straight.

And that’s how female leaders are tagged as “bossy.”

Though I called her a bitch.

Truth? Leadership is hard. We need good leaders, regardless of gender, who can use the talents and resources at their disposal to do great things for their company, their state, their country. We need leaders who can raise strong children to both lead and follow in this complex, beautiful and scary world.

But this isn’t solely a gender issue. We need to do better as parents and educators to identify leaders — both boys and girls — and help them develop leadership skills that matter. If there is a child who is naturally better at leading a group, why not give them more opportunities to lead — and assist them in becoming stronger leaders? For example, I was a control freak. I wanted to do everything in a group because I didn’t trust that anyone else could do it as well as I could. A good lesson for me to learn (which I did, eventually, when I worked in the Capitol) is to recognize other people’s strengths and use their talents for the good of the entire organization.

I don’t have all the answers, but I certainly recognize that there is a problem. Resisting putting labels on kids is definitely a step in the right direction. I’m not calling my girls bossy anymore. If they get out of line, I’ll say to them what I say to their brothers: Stop being a brat.

What about you? Do you have a related story to share?