I love winter. I love the cold, the rain, bundling up in blankets and thick socks. It doesn’t snow where I live, but it does get cold, and that’s okay with me! 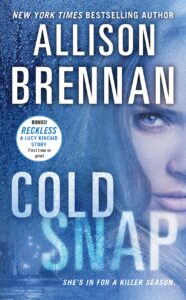 There’s a plethora of Christmas books, mostly coming out in October and November, with pretty covers and heartwarming messages. I don’t write pretty and heartwarming, but I had a Christmas book idea … the Kincaid family reunion is threatened by murder. I wanted to call it KILLER CHRISTMAS, but my publisher nixed the idea. They feared it would limit the sales opportunities of the book. And in some ways they’re right — it wasn’t *quite* a Christmas story. 🙂

Still, COLD SNAP got a pretty blue cover and honestly, it’s one of my favorite Lucy Kincaid covers. Not because it’s pretty per se, but because the elements all work together. It came out last week and I just learned that COLD SNAP hit #12 on the NYT mass market list, #21 on the e-book list, and #35 on USA Today.

I didn’t plan on writing a series with Lucy. I planned on writing three books with her, and seeing where it goes. The first three books had an over-arcing storyline of Lucy and Sean’s relationship, and it could have ended after the third book because they both confessed their love and readers could believe in their happily ever after.

But I had a lot of ideas for Lucy, because she’s young, new and fresh. Most of my characters are seasons veterans of their profession, cops and agents with five, ten, twenty years experience. Not Lucy. She was just sworn into the FBI the day before COLD SNAP starts — and that’s book #7!

If the first 3 books focused on their relationship, the next 3 books focused on Lucy gaining confidence through training. COLD SNAP in many ways stands alone — it wraps up the family story lines, it brings in all the Kincaids and gives readers, hopefully, a satisfying conclusion.

With the coming DEAD HEAT (6.3.14) I’m rebooting the series in many ways. Lucy is now a full agent in San Antonio. She’s living with Sean, who has of course moved with her. It’s a new beginning, without her closest friends and family helping. She needs this–the time to prove herself to herself, and that she can do the job without the influence and assistance of the family that has always protected her. She has Sean and they’re in love, but there’s a lot of potential hiccups along the way. DEAD HEAT is a new beginning, while COLD SNAP is an ending.

Writing a series character has pros and cons. The pros? I know these people. I don’t have to spend a lot of time trying to get to know them, or figure out how they’ll react in certain situations. Writing a Lucy book is like revisiting old friends, and giving them a deadly problem to solve — and knowing that they can. The cons? I don’t want to get bored. I don’t want to sit down not liking these people because I’ve spent too much time with them. The best remedy for that is to write something completely different between books … which I’m going with the Max Revere series. Yeah!

Anyway, this is a little BSP, I know! But during release week all I can think about is the book that just came out. I write, but not as much as I do before and after release week. I don’t know why …

I’m working on a novella, a Max Revere prequel that we’re calling “Maximum Exposure.” NOTORIOUS comes out on March 18, and the novella will be out the month before. I’ll admit — I didn’t want to do this originally. I introduced Max in NOTORIOUS the way I wanted my readers to meet her. I didn’t want to introduce her twice. But once they asked me, my mind started thinking, and one morning I woke up with an idea that I really wanted to write. It takes place two years before NOTORIOUS, and it completely stands alone. Ben Lawson, her old college friend, asks her to host a cable newsmagazine. He has a detailed proposal. She says hell no and goes to Colorado to investigate the cold case of a missing college student. And realizes that maybe having a bigger platform would be good thing. The story stands completely alone, so readers who don’t have an ereader aren’t going to feel they missed something (I hope!) but readers who do will get a complete story as well as a preview to Max.

So — I have two questions today. First — do you love or not love Christmas books? Do you have one you re-read every season, sort of like I watch IT’S A WONDERFUL LIFE every year? And second — what do you think of digital-only novellas? Love them? Hate them? Why?