The first time I flew to New York for a conference, I took the red eye. From California to New York, leaving at midnight and landing around six a.m. I thought I was being so smart … saving a night in the hotel, the flight was cheaper, I could sleep on the plane …

I was completely dead the next day, I couldn’t check into my room until after twelve noon (meaning no shower, no nap, no downtime at all …) and I never really felt like myself for the rest of the conference. I swore I would never do it again, choosing instead to waste a day traveling so I could come in, check into the hotel, sleep, and wake up refreshed.

Except, this Thrillerfest, I’m taking the red eye again. 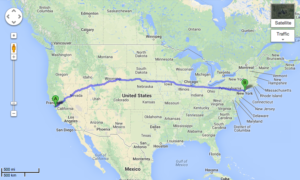 There are a couple of reasons. First, I made hotel reservations at the conference rate ages ago. I tried to add on one night, but couldn’t get the conference rate and wasn’t going to spend more than $60 extra when I would be getting in close to midnight. Second, I got a really great deal on a Jet Blue flight, so the red eye is both direct and cost effective. And finally, I have a friend I can crash with in the morning until my room is ready so maybe I can take a shower and at least sort of wake up. I’m going to bring a pillow on the plane and a blanket and hopefully get a little bit of sleep since I have a meeting Tuesday afternoon.

My flight to the RWA conference in San Antonio is also convenient — it’s a little closer, I’m taking Southwest which has a layover in Phoenix (nice airport) and I’m getting in early afternoon. Plus, I used miles, so only paid for one way. Yeah me!

I don’t generally mind flying. However, I really hate sitting around doing nothing. I want to write on the plane, so bring my laptop or my iPad with a wireless keyboard. Unfortunately, when people put their seats back, I can’t type without getting cramped. If they’re tired, I get it — but some people are just rude. So I’ll write on planes if I have a tight deadline, but now I usually read a book then watch a television show on my iPad. For Thrillerfest, that’ll be Season Three of CONTINUUM. Unless, of course, I sleep.

Of course, there are travel nightmares. Like when I flew to the RT conference in New Orleans on Monday, but got stranded in Houston because of storms and had to sleep in the airport all night. That’s worse than sleeping on a plane. I came really close to missing the main reason I was going to RT — Toni Causey’s The Sirens of Suspense party. But I made it in the nick of time!

Some people have their favorite airlines or least favorite airlines. I’ve had great experiences … and awful experiences .. on pretty much all of them. I like United and Southwest because their frequent flyer programs are the easiest for me to figure out. But I hate the cattle call of Southwest, so use them primarily for shorter west coast flights. I like the United Economy Plus … when you can find a plane with the extra leg room. My daughter once had an awful experience with Jet Blue, but the one time I flew cross-country with them, I had an easy, comfortable flight. Go figure. I think the worst for me was the Delta flight when I was stranded in Houston. The staff were fantastic, but the management sucked. They didn’t have enough staff to cover all the people who needed flights out, and they didn’t go to the desks to help them. I’m sorry, but management should have been the ones staying. The Delta staff worked their asses off to help hundreds and hundreds of stranded travelers.

One thing I particularly like about traveling now is that airports are providing better accommodations — some are better than others, of course. Some airports have lots of charging ports, comfy chairs, and great restaurants (Houston). Others have very few charging ports (Salt Lake City) and few or poor food choices. My hometown airport of Sacramento has done a terrific job of bringing in both local and chain restaurants, but I’ve never been delayed there (and I tend to cut things rather close when I’m leaving …)