Three years ago, I discovered a new show that I absolutely loved. GRIMM. What if fairy tales weren’t fiction? What if there were people who could change into monster-like creatures? What if they weren’t all monsters but, you know, the resident clock repairman or the bridge builder?

After six episodes, ratings were low and every television reporting website I frequent (there are many) said it was on the cusp of being cancelled. That it could go either way. I thought for sure it would be gone — networks do that, you know. If a show they demo doesn’t meet XYZ on their list, they axe it. It happened with several of my other favorite shows, and almost always on network television (cable TV tends to give shows more time to find their audience.) For example LIFE with Damien Lewis and DETROIT 1-8-7. Both great shows with solid writing and acting. Great characters. For LIFE, they let the creators finish the story arc so that there was closure by the end of the second and final season. For DETROIT, they left us with a huge cliffhanger. And then there was FIREFLY … oh, don’t get me started. Brilliant show, great characters, fabulous writing … and TPTB screwed it all up. 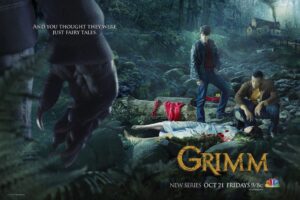 GRIMM was going the way of DETROIT and I did not understand why. Well, I did understand a bit — you really have to see the first two episodes to understand the series world-building. Because it’s predicated on our world (just different) if you go into it mid-way, you might be a little lost. However, the writers did a great job with the pre-show clips and dropping information in dialogue.

I prayed and tweeted and posted on Facebook and did everything I could to tell people about the show. I doubt my voice did anything by itself, but there was enough of a fan base that TPTB gave the show the rest of the season … and it took off.

GRIMM is in its third season and keeps getting better. I’m re-watching the first two seasons with my sons (9 and 12) and they love it as much as I do. But re-watching the series showed me that this show really has “it” — that intangible something that makes a good show great.

There’s another show now into 4 episodes that I think is every bit as good as GRIMM but is on the cusp. Ratings were solid for the pilot, but have fallen every week since. It’s a hard time slot (it took over the slot for BONES when BONES moved to Friday) but I really hope that TPTB give it more time.

Sure, it has Karl Urban. That alone makes it worth watching. Like GRIMM, ALMOST HUMAN requires a bit of world building. It takes place in 2048 and crime is different. But AT ITS CORE, this is a cop drama, just like GRIMM. It’s about a damaged cop who walked into a trap two years ago and is dealing with the repercussions of losing his partner, being in a coma for two years, and a different world. Cops are required to partner with androids because the city is far too dangerous for human cops to battle crime alone. The stories are fabulous, and like the JD Robb books I love so much, they take the basic component of a murder mystery or crime thriller and raise the stakes by playing the what if game, making crime interesting for those of us who have read hundreds of crime thrillers and watched thousands of television episodes. For example, there’s a DNA bomb — criminals who don’t want to be caught with DNA explode one of these in an enclosed space and it contaminates everything. How cool is that? There’s a drug war (of course) but the new addictive drug is derived from algae mined deep in the ocean and was only discovered 3 years ago. It’s called “the bends.” Get it? It needs to be cooked, like meth, and that makes the storyline accessible even when using “future” technology. Michael Esly and Mackenzie Crooks, two of the main characters, are fantastic. They all work together, it clicks. At least for me. 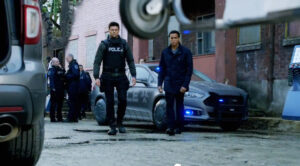 The network (FOX) didn’t skimp on the special effects and costumes, so you really feel you’re in the future. It’s definitely more high budget than GRIMM (but GRIMM is filmed in modern day Portland, no elaborate sets or explosions.) I appreciate that. But you’re not lost, because everything still works according to the stables of the genre.

I learned through a Q&A with one of the people at the SyFy channel that when you purchase a season pass on iTunes, that doesn’t get counted in the ratings. Only live viewing or DVR gets tracked. So I started recording ALMOST HUMAN even though I bought the first few episodes on iTunes (that they don’t offer a season pass tells me that this is an experiment, and they don’t know how many episodes they’re going to air. That scares me!)

When I love a new show, there are three things working in tandem. 1) Actors. They have to fit the role, they have to be the character. 2) Writing. Good writing + talented actors can fix many flaws. 3) Character. There needs to be a compelling story, but it’s really the characters who make it. Flawed and heroic. The story itself doesn’t have to be complex, but there has to be that “it” factor that makes me look forward to the next episode or the next season, and that’s all because I care about the characters.

ALMOST HUMAN has all these.

It’s not perfect. I would like to see more of the new world beyond the limited scope they’ve shown us of the city and police station. For example, in one episode one of the android cops said that people were climbing over the wall and they needed to take care of it. What wall? Going in or going out? Why is there a wall? I’d like to see a bit more depth, and — like GRIMM does so well — a better connected continuing storyline threaded through. I’d like to see the secondary characters take on a stronger role, particularly the two female characters. (Though, this is a buddy show, so I get that the two females aren’t getting as much depth and screen time.) I like the world-building so far, I just think they need to do a bit more to show us the future. There is so much they can do with this series. I want — NEED — it to succeed.

I want the network to give this show more time. Change nights, play re-runs, do whatever they need to do to find their audience. I highly doubt I’m their target demographic (Female, 44) and I know television focuses primarily on the 18-35 age group, but either it’s on the wrong night or the wrong time or they need to up the stakes or SOMETHING.

DVR it. See if you can watch the first episode or four on demand. Catch up. Or start watching next Monday at 8 on FOX. (Damn, I sound like paid promo! I’m not, I’m just a fan who wants this show to succeed.) I’m not saying they’re GOING to cancel it, but if the ratings don’t go up, I suspect it’ll be on the chopping block. And to me, that’s a loss of great storytelling. And a loss of Karl Urban every week. 🙁

What favorite show of yours do you think was unfairly cancelled?