Hop on Pop and Other Stories of Violence 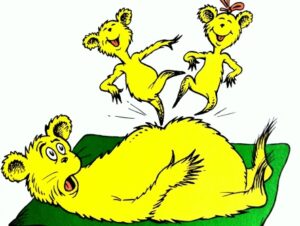 So I was reading GalleyCat last week and noticed this tidbit:

A Canadian parent filed a complaint to the Toronto library last year, asking to ban Dr. Seuss’ classic children’s book Hop on Pop because it “encourages children to use violence against their fathers.” The complaint was revealed this week when the Toronto Library released its Materials Review Committee report for 2013.

The person suggested that the library remove the book from the library’s collection and “issue an apology to fathers in the GTA and pay for damages resulting from the book.”

After I picked my jaw up off the floor, I laughed. My first thought? Idiot. Yep, let’s go ban Dr. Seuss because he condones violence against parents.

Banned Books Week isn’t until September, but I think censorship is an important issue year-round. I am a staunch advocate of the First Amendment, but I come at this issue from a slightly different angle.

I tend to be right of center politically, and while I don’t publicly talk about politics because I am burned out after 13 years working in the California State Legislature, my first real up-close-and-personal view of censorship was when I was the Editor-in-Chief of a right-of-center newspaper in college. I went to UC Santa Cruz which has a “progressive” or “liberal” student body. I went to college because I wanted to not only learn about everything, but be exposed to new and different ideas, even ideas that differed from my own. I loved debate, and considered myself good-natured even when I didn’t agree with someone. My Intro to Law professor, a self-proclaimed Marxist, told me that I was the only person in class who ever questioned anything he said. He was revered on campus. Because he was so worshipped, no one questioned anything he said. I actually liked him a lot — I like being challenged — and while I didn’t agree with a lot of his conclusions, I learned a lot and I respected him. He made me think about what I believe and why and learn to back up my convictions with facts as well as admit when I was wrong.

So I was surprised when, in my sophomore year, our inaugural issue of the monthly newsmagazine was distributed according to campus policy (in designated areas) in the early hours of the morning … then collected by a group of so-called “progressives” who didn’t like what we had to say and threw stacks of our newspapers in the trash. More than half our print run was thrown away before dawn.

It was this intro to censorship that turned me from a general supporter of the First Amendment to a die-hard opponent of censorship. I am not threatened by other people’s ideas. I don’t have to agree with them, I don’t have to like them, but I’m not threatened by them. I am comfortable with my libertarian philosophy just like I’m comfortable with my religious faith. And I accept that not all my friends agree with me and I love them anyway.

So book banning falls right in line with my frustration with public officials of ALL political parties wanting to censor ideas, articles, and more.

The “Hop on Pop” article simply highlights the absurdity, showing that there will always be someone who is offended by something.

As a parent, I have the right to ban books in my house. There are age appropriate books. I’m not going to allow my 11 year old daughter to read Fifty Shades of Grey. If my 17 year old daughter wants to read it, I wouldn’t stop her, though I might tell her I think she should read something else. I told my kids once they hit 14, they can read whatever they want. I did. I read highly inappropriate things even before I was 14 and didn’t end up a sexual deviant or serial killer (though I write about them!)

Seriously, though — parents have EVERY right to censor what their kids read, but not what other kids read. Parents can and should have the right to sign off on controversial books (such as books depicting sex and violence) in schools for their minor children. But that doesn’t mean that no one should be allowed to read the book. I allowed my middle school daughter to read SPEAK, but I can understand why some parents wouldn’t. Some kids aren’t mature enough to handle the subject of date rape, and some kids who are 11 or 12 are truly not in a place where they need to have those images in their mind. But as PARENTS we know our children best.

So this is the end of what is probably my most political post ever. 🙂 I just wanted to say it.

What “banned book” is your favorite and why?