I tried to get my daughter to blog for me tonight …

But she just rolled her eyes and said she needed her own blog. True, and that’s on the to do list for summer.

I even had a topic for her. It started like this.

We were sitting in the school parking lot yesterday after Kelly’s track practice (today is the big, final meet–wish her luck!) waiting for Starbucks. (No, Starbucks doesn’t deliver, but my oldest daughter does–especially when I’m paying.) I told her how inadequate I felt reading Murderati because we have a new blogger (David Corbett) who is just such a good writer–one of the all the words fit together perfectly type who is just plain smarter than the average person. I handed her my iPad and let her read the blog about character. After our Starbucks arrived, we left and she said, “He makes a lot of good points. I particularly like what he said about fingering smoke–that’s exactly how I feel when I’m drawing. It’s a great analogy.”

And so my fifteen year old again makes me feel inadequate because she totally got it. She even said, “I feel like I learned something. I don’t learn anything at school.” Then she went on about the book she’s reading. She likes it–it’s a 1940s YA noir mystery she’s reviewing. She thinks the author likes the story more than the character, that the character is kind of flat and predictable. So I said, maybe you could blog about it. That’s when she rolled her eyes and informed me that one, she needed her own blog and two, she was only three chapters into the book. Because it was well-written and she liked the time period, she was giving it more time. (We’d recently had a discussion about whether books, once started, must be finished. She came to the conclusion that there’s so many books she wants to read, that if 1) the book is poorly written she’s not going to waste her time after a couple chapters (she’s bought books because of the cover that were total crap–her words) or 2) if after 100 or so pages she’s ho-hum about the book, that there’s nothing interesting about the plot or the character, then she’s going to put it aside. But this particular book has the writing and the plot going, so she’s continuing.

She told me a bit of the set-up, and I agreed that the story sounded promising. And then she said one thing and an idea popped into my head . . .

(I know you’re thinking, what did she say? But what she said–that the heroine’s father had a prosthetic limb because he lost his leg in the war and thus she began to help him with the “footwork” of his job as a P.I.–really has nothing to do with my story idea except in the loosest sense. There are no P.I.’s in my novel, no one without a limb, and her parents are dead.)

Years ago, when I first sold, I had a fear that I would never have another idea. I know, stupid fear, because any writer knows it’s not the ideas that dry up–if anything, we can’t stop them from coming. Now discerning the good from the bad, the sellable from the blah, that’s another story. But ideas themselves are just there. What I see, what I read, what I hear, it’s all there in a big stew, slowly simmering. Every once in a while one of them rises to the top and I usually know whether it has promise or it needs to go back into the oven for more basting.

Such has been my ideas for writing a YA mystery series–I keep sending them back into the cooker because they’re not quite right. I’ve wanted to for some time–since before VERONICA MARS. After I saw that show, I dumped my idea of a modern day Nancy Drew because there was no way I could do it as good as VM and I didn’t want to try. I loved that series. So I pushed the YA idea on the back burner. I’ve had a few pop up now and again, but nothing that struck me as something that would work. But when I least expected it, and when I wasn’t even thinking about it, this idea popped up. A YA mystery/suspense series. The main character was just there. I even know her name. I know what she looks like, I can hear her voice, and she is unlike other heroines in YA today. At least when I explained her to Kelly my daughter thought she had some elements of a good YA heroine, but was different enough that she would stand out. And it’s not a Nancy Drew type series, either. It’s edgy, contemporary, and my heroine is both flawed and smart, bordering on an anti-hero (but not quite.) I was so excited about the story idea that even though I’m in the middle of revisions due Monday, I took thirty minutes to quickly write down notes before it slipped my mind. Unfortunately for me, the more I wrote about the story (stream-of-consciousness style … hmm, sort of like this blog entry!) the more excited I became. I know the opening scene, the situation that launches the over-arching story, and I know my heroine. There’s some research I’ll need to do, but fortunately because this is suspense not much!

I don’t write YA and I don’t know if I can pull this off, but I so want to try. In my free time (hahahaha.) I’m contracted for three more Lucy Kincaid books (yeah!), moving the series to a new publisher (Minotaur/SMP), and I’m very excited about the move and the books! But my first deadline is October 1, so I don’t have a lot of time to screw around with something completely different. (And I’m very excited about Lucy #4 — the story is really going to shake Lucy and Sean.)

So much for my fear that I’d never have another idea … I just wish they’d come when I have more time to explore them.

I did learn something about myself, however. I learned that while I love the cool premise and play a lot of “what if” games with plot points before I start writing, I CAN’T start without my main character ready and willing. I don’t do character charts or character conversations or horoscopes or personality tests or a GMC chart or a hero’s journey. What I do need is for my hero to walk into my head and say, “Put your ass in the chair, Allison, I’m ready to tell my story.” And Sydney–yes, I know her name–said that to me last night.

I suspect she’s not going to like being told to wait.

Now, for something completely different — Kelly’s art is displayed at the Folsom Library for the Congressional Art Competition. As we all know, placement is everything–and she doesn’t have great placement. Her charcoal drawing is one of the smaller pictures, and they put it on the bottom. Sheesh. So if you live in Folsom, California and want to stop by the library before Sunday and vote for her in the People’s Choice Award portion, well, that would be fantastic. The competition is stiff, and we’ve been told that the colorful art usually wins competitions like this. 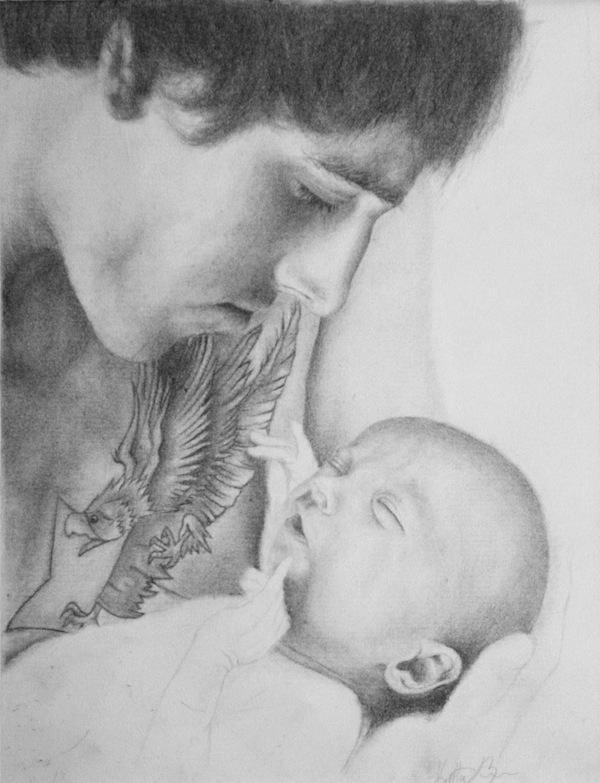 Here’s her amazing drawing. She’s a freshman. She thinks it sucks. I think she’s a typical, self-critical artist. I’m so proud that she let it be shown, because it’s hard to let your “imperfect” baby out there for people to criticize or praise.

She also won best in show for 9th graders in the ASCI regional competition (and should have won overall Best in Show except that the picture was a bit controversial for the Christian school association. Yes, I have forgiven them, though it wasn’t easy!) This is a charcoal drawing that she got permission to draw for the competition from the photographer (you can see the original photo here.)

No real questions today — I’ll be writing! (Revising!) But because I want to hook as many people on my Lucy Kincaid series as possible 🙂 I’m giving away three copies of book one, LOVE ME TO DEATH, my RITA nominee for Best Romantic Suspense. But not to you–ha! For a friend. You get to pick any friend you want me to send this book to who you think might like it! And I’ll sign it and give you the credit for the gift.

Kelly recently finished reading the first two books in the VAMPIRE ACADEMY series by Richelle Mead. She had avoided them because she “assumed” they were typical vampire books and she was “over” vamps because everything was a knock-off of Twilight, or overdone, or poorly written, or just common. But she says they are so, so, so good and she can’t wait to finish the series. Is there a book or series you avoided because of the hype for the book or the genre, only to read it later and hit yourself because of what you’d been missing?