Yes, it’s been six months since I’ve blogged. There have been a lot of reasons … and I’ve thought about shutting down the blog completely. But then I realized, I have a whole bunch of material I can post from the workshops that I’ve taught, articles I’ve written, and some original observations about books, writing, television, etc. And, I like this blog 🙂 So I’m back to trying to blog weekly … and see where we go from there.

So why have I been busy?

Writing and kids. Yes, nothing has changed.

However, I had several back-to-back deadlines and went from writing to revising to copyediting back-to-back-to-back on three books … I have a brief lull now as I wait for revisions of POISONOUS, the third Max Revere book. Yesterday, for example, I spent 9 hours straight working on copyedits that were late because the digital file I sent became corrupted about half-way through the process. I knew there was a problem when the file kept crashing (I rarely have files crash on me. I have a new iMac, updated software, and I’m fairly tech savvy.)

The kids have kept me busy, too. Mary is in competitive softball and she has many practices and tournaments. Next week we’ll be in Oregon for the Western Regionals! Which is why I’m not in New York for RWA this week … I would have had to leave New York early, and I couldn’t justify spending all that money for only a couple days, especially on the heels of ThrillerFest (which was the BEST conference I’ve been to in a long time.)

I turned in the copyedits of NO GOOD DEED, which will be out in November … right on the heels of BEST LAID PLANS which will be out this August! I think these are the two best Lucy Kincaid books yet. They stand alone (complete mystery in each book) but they build off each other. Kane Rogan plays a small role in BLP and a big role in NGD and … minor teaser … I introduce a potential love interest for Kane. I didn’t think I would ever write his book, but Siobhan Walsh is perfect. It might take a few books before he comes around …

I’ll be working on revisions for POISONOUS, then starting the next Lucy book. I want to call it ALL FALL DOWN … but we’ll see what my editor thinks 🙂

Tomorrow I’ll have a guest blogger, and I’ve already started scheduling posts for the next few weeks.

Thank you for your patience! Wish me luck … 😉 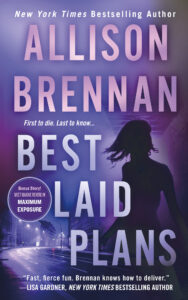 My publisher is giving away a free book to anyone (U.S. and Canada) who pre-orders BEST LAID PLANS. Click here for details!. You only have until August 3 or while supplies last.

Also — BEST LAID PLANS will include a bonus story, “Maximum Exposure,” previously only available in ebook!