In Search of the Perfect Cover

I may get in trouble for this blog, but Random House is closed until January 3rd, so who would I ask? I’ll invoke the “forgiveness” doctrine–it’s better to ask for forgiveness than permission 🙂

In five days, LOVE ME TO DEATH will be released. It’s also my anniversary as a published author. Five years ago to the day (almost) THE PREY was released. LOVE ME TO DEATH is my fifteenth novel. I’m as excited as I am nervous. The book market has changed dramatically between my last romantic suspense release (August 2009) and this book. More readers are buying e-books, more readers aren’t buying books at all, and romantic suspense as a genre has taken a bit of a dip. Which is sad because I love, love, love romantic suspense. I love all suspense. And I know that everything is cyclical–what’s hot today might not be hot tomorrow, but may be hot next week.

So because of all the ups and downs and sideways changes in this business, this release is doubly important. It’s been 17 months since my last romantic suspense was released. In between I published two supernatural thrillers and a short story, but I had never wanted so many months between books in my core genre. I’m truly hoping that my readers haven’t forgotten about me!

LOVE ME TO DEATH was a labor of love. It’s the first of a series starring Lucy Kincaid, one of my favorite characters from previous books. Lucy is the youngest sister of the Kincaid Family of San Diego. In FEAR NO EVIL (April 2007) she was kidnapped on her high school graduation and would have been killed live on the Internet if she hadn’t been rescued by her brother, Dr. Dillon Kincaid, and rogue FBI Agent Kate Donovan. Now, she’s nearly 25 and waiting to hear if she was accepted into the FBI Academy. (For long-time readers, I aged her quicker than the rest of the Kincaid’s, but only by a few years.)

In LOVE ME TO DEATH, Lucy volunteers for a victims rights group as well as interns at the Washington DC Medical Examiners Office. She lives with her brother Dillon and his now-wife Kate in Georgetown, Washington DC. Patrick Kincaid, her brother, has opened the east coast branch of Rogan-Caruso-Kincaid with Sean Rogan–the younger brother of Duke Rogan, who was the hero of CUTTING EDGE. Lucy goes undercover online to lure convicted sex offenders into violating their parole, believing that they are being arrested and sent back to prison. Except she soon learns that the men she’s setting up are being executed. Her dream of becoming an FBI Agent is in jeopardy as the cops turn to her as a suspect, and she needs Sean’s help to find out what’s really going on.

Usually, my heroes take longer to get to know than my heroines–not so with Sean. As soon as I stepped into his head, I knew him. He still has a lot of secrets, but I understand his character better than any other hero I’ve written.

LOVE ME TO DEATH had several covers. The basic design stayed the same, but the colors and fonts changed dramatically. Covers are so important–especially now. They have to look appealing both on the computer enlarged, and as thumbnails, and they have to pop from the shelves. They need to convey the tone and content of the book so that readers aren’t surprised by what’s in the pages. If the cover looks dark and suspenseful, but the book is a romantic comedy, readers will be upset. Covers are not always easy. I have loved some of my covers and not loved others.

This was the first cover Ballantine sent me:

I didn’t love it.

The colors were off, the white clashed, and the cover was too busy with the angles. I didn’t love the font for my name, either. But I just hated the the woman’s face. Too sharp and too much like a photograph. Not to mention that readers would assume that the woman was Lucy and Lucy has brown eyes, not blue eyes.

Overall, I felt it just didn’t work at all. I went back to them with a list of what I liked (which wasn’t much, I’ll admit) and what I didn’t like.

The second cover was better, but certainly not there.

I still didn’t like the colors, though they got rid of the photograph look. I didn’t like the slanted font with all the text from the teaser–way too busy. With the complex graphics and all the stuff going on on the cover, it looked . . . just not right.

And my name was too bold, it didn’t feel right on the book.

Okay, I know, that sounds funny, right? Something doesn’t “feel” right? But sometimes, that’s all I have. I look at a cover or any piece of art and it just doesn’t feel right to me. And that’s how I felt about my name, and the overall cover.

So they went back again. And I got:

Again, the colors–I just didn’t like the orange, though they gave it a wash which was better. I liked the positioning of the text much better, however. I asked them to go back again, and I suggested gold rather than orange.

Now, I’ll admit, I was getting nervous–it’s hard to go back to your publisher, even when you have a good relationship with them, and ask for changes. But I rested on the fact that I had opposed the orange from the very beginning. If they just changed that, I would be happy. (I hoped.)

THEN we had a winner:

The only difference is now I have an amazing quote from the generous and talented Lee Child: ” A world-class nail-biter . . . Brennan is in the groove with this one.” Which is doubly good because I hated the tag line they had on the book and they wouldn’t change it.

There was actually one version between the last two, but the changes were so subtle I won’t bore you with the art–basically, they fixed some coloring issues they had when they put on the gold/yellow wash, plus the spacing between the letters in my name. Though it looks more yellow on the screen, the flats show the gold well.

In the end, I am very happy with the final covers, and particularly grateful because I know how much work goes into cover design–and how many people are part of the process! Everyone wants to have the best cover for the book, so when I’m happy everyone knows–and they know! One reason it was so important is because LOVE ME TO DEATH launches a series and a series character–which means that branding is doubly important. 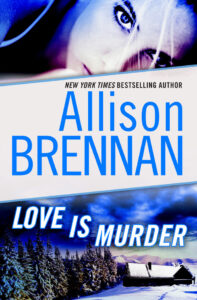 These work well and “brand” the Lucy Kincaid books. (I still think they are a little busy, but no one else agrees with me. I still love them!) LOVE ME TO DEATH, the e-novella LOVE IS MURDER, and Lucy #2, KISS ME, KILL ME. Lucy #3, IF I SHOULD DIE, is a September book and I should be seeing the cover soon!

Now for some fun stuff!

I’ll be blogging at Borders True Romance on Sunday, January 2nd–I hope you can stop by and comment!

I’m donating $1 to Reading is Fundamental for every new follower who follows me on Twitter through December 31, 2010. #donaterif

What do you like or dislike about covers in general? Romantic suspense or suspense covers in particular?