Vince Lombardi said, “Perfection is not attainable. But if you chase perfection, you can catch excellence.”

It’s not just because I’m watching Timothy Olyphant. Though, he is nice on the eyes.

In fact, I’m such a big fan-girl, that a year ago—after the Season Two premiere—I blogged about this show over at Murderati. 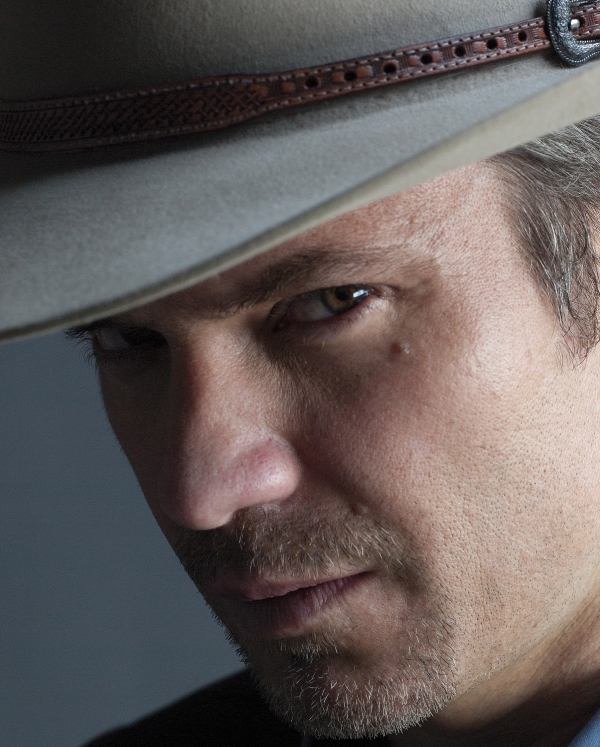 You might think I’m blogging yet again about Justified so I can post pictures like this here at Murder She Writes. Not true. Not me, nope. That would be Lori 🙂

But I’ll let you enjoy this shot for a moment.

Okay, there are a lot of fantastic television shows out there—but most of them are no longer on the networks. Or, the big networks kill them too soon, without giving them an extra push or doing nothing to save them (PRIME SUSPECT & DETROIT 1-8-7 – two of my fave new shows – cancelled after one short season.)

Cable has succeeded because they’re lower budget and can achieve success with a smaller viewership. They break rules and take risks. They don’t fit the mold. This is good for television lovers like me who are frustrated with the ho-hum and predictable shows. Sure, I like BODY OF PROOF and CASTLE and others, but my favorite shows—the shows I put on my calendar—are all on cable.

As soon as F/X announced January 17th as the Season 3 premiere of Justified, it went on my calendar. I bought the season on iTunes, but because I could not wait for the show to air and download, I also recorded it on my DirectTV box and watched it last night 🙂

Justified, based on an Elmore Leonard short story “Fire in the Hole” about U.S. Marshal Raylan Givens, is violent, edgy, and darkly humorous. I’ve often said that character is the single most important thing in a good book, and that’s true for television as well. Character is the foundation. Without character, it doesn’t matter how strong the writing is or how beautifully the film is shot, or how much money is spent on special effects. If the foundation crumbles, everything else falls with it.

Justified has the acting, writing, and pacing. But it’s foundation is rock solid. It’s about the characters.

Raylan Givens himself (played by Timothy Olyphant) is a flawed hero. Self-confident (cocky); smart; dedicated; bad-ass Western lawman in every sense of the word. DEADWOOD was just preparing him for this role.

Yet, if this show was just about Raylan, it wouldn’t be half as good. Boyd Crowder—played by the amazing Walton Goggins)—is even more complex than Raylan. He’s the bad guy … most of the time. But like any good villain, he’s not pure evil. In fact, he’s not evil, just not good. Boyd has his own code of honor, and when he and Raylan are on the same side, they can fight together. When they’re not? Raylan’s put him in prison a few times.

The other characters are all equally outstanding. Raylan’s boss, his colleagues (I hope they do more with Tim and Rachel, who have been strong secondary characters who add to the show, and can add much more as hinted in some past episodes.) The two primary female characters—Raylan’s whiny, bitchy, cheating, pregnant ex-wife Winona (yes, the baby is Raylan’s. I don’t have to like it.) and Ava, widow of Boyd’s brother who was with Raylan for season one and is now with Boyd. I like Ava. She has spunk, she stands up for herself, and she’s complex just like Boyd and Raylan.

Season three promises to be as good as the first two. Maybe better—and that’s hard to do. But if the opener is any indication, they’re on that road. My only skepticism at all is that the writers think that Winona can be redeemed. Because I trust them, I’m willing to give them the chance—but I think she should leave Raylan and go elsewhere. I mean COME ON. She cheated on him with GARY, a realtor. Divorced Raylan and married the weasel. I actually liked Gary more than her! (And I didn’t like Gary.)

At it’s core, though at times morally murky, JUSTIFIED is about good versus evil. No one is all good, or all bad. It’s also about all the shades of gray in between. It’s about choices you make and living with the consequences. It’s full of action, suspense, humor, crisp dialogue, and–of course–great characters.

And with it, Graham Yost and his crew have caught excellence.

Here’s a little commercial that played last year as a Super Bowl commercial:

And a teaser for Season Three:

I wish I could find the opening scene of season 1, episode 1 to show you — the scene that sold me on the series, where Raylan shoots Tommy Bucks. That scene has lasting consequences, even in Season Three.

Instead, here’s a music video of the opening song with some fantastic clips from season one. Gangstagrass performs the song, and because I loved it so much I bought their album, which inspired IF I SHOULD DIE. They were so gracious to give me permission to quote lyrics from another of their songs in the opening of DIE.

What show do you evangelize for? What show has characters so real you believe? Is there an opening scene that drew you in immediately, sold you on a show hook, line and sinker? Comment below for a chance to win season 1 or 2 of JUSTIFIED on DVD or iTunes; or season 3 gifted from iTunes … winners choice.