This summer I binge watched HAWAII FIVE-O (all 7 seasons) and loved it — great ensemble cast, over-the-top action, great dialogue. It was an all-around fun cop show. Then I binge watched BLUE BLOODS (all 7 seasons) and also loved it. Different than HAWAII FIVE-O, but also with a strong ensemble cast and also a cop show. (Yes, I love my cop shows — always have, always will.)

But when I finished BLUE BLOODS, I realized I had nearly a month (or longer!) to wait until all my favorite shows returned. The 8th season of both of these shows; ARROW; WALKING DEAD; BETTER CALL SAUL; iZOMBIE; GOTHAM; and more. A few that I’ll watch though I’ve kind of lost the love for (SUPERNATURAL, NCIS, FLASH). But truly, I’m mostly looking forward to a few Netflix Originals that I fear I’m going to have to wait nearly forever to see (read: a year or more) … specifically, JESSICA JONES and DAREDEVIL. 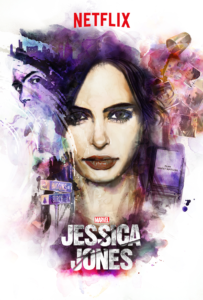 So I was checking out what was on Netflix because when I’m done writing for the night, I really like to watch an episode or two of television to unwind. I discovered two shows, both based on graphic novels, that I was stunned I’d never heard of before. VAN HELSING (Netflix Original) and WYNONNA EARP (SyFy). I’m in the middle of binging both and will be done before the weekend because I have them downloaded to my trusty little iPad for my trip to NOLA tomorrow. Both are created from a graphic novel universe.

I love strong female characters — I write them, I read them, I watch them, I raise them. No one questions why WONDER WOMAN was a great success — Gal Gadot’s pitch perfect rendition of a long-time favorite among all of us Generation-X girls was exactly what the comic universe needed. Don’t get me wrong — I still love Batman and Iron Man and Ant Man and Spiderman Homecoming was terrific. There is plenty of room for all these movies to be created for our enjoyment. But maybe because there aren’t quite as many with a strong female lead, those that are created — and completely rock — shine head and shoulders above all other movies in the season.

JESSICA JONES debuted as a Netflix original at the end of 2015. I watched it before DAREDEVIL because I was more intrigued by her character. (Truth be told, now that I’ve watched both, I love both of them equally — it’s simply great storytelling.) Jessica Jones is a loner, a gumshoe, she has a touch of the paranormal (physical strength, the ability to jump really high) but her real strength comes from her observation skills. She’s a private investigator and has sharp instincts. What I love about the Netflix Marvel universe is that the stories don’t completely rely on the supernatural abilities of the characters, but on the character themselves. How they accept/reject/use their abilities in a modern day world that has seen unusual and unexplainable events but is still rolling along like always.

To me, Jessica is a fantastically flawed female protagonist who can carry the show as the lead. I love it when the girl is in charge, when she drives the story, and has very realistic strengths and weaknesses. 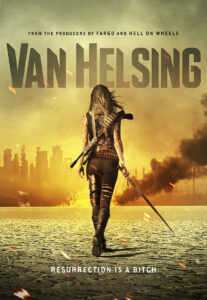 So when I saw two other female title-character named shows — both with 13 episodes which means not a huge time commitment — I jumped.

VAN HELSING is set up a bit like THE WALKING DEAD in that the main character Vanessa wakes up from a coma to a world vastly different than the one she left. But instead of zombies, there’s vampires who can now walk in the light because of volcanic ash that has rained down on the world. Vanessa is a vampire hunter, it’s in her blood — her blood is poison to vampires, and will turn them human again if they taste it.

WYNONNA EARP is the great-great granddaughter of Wyatt Earp and she has his gun, the Peacemaker. She returns home after the death of a loved one and we learn pretty quick that the first born of every Earp generation has the “gift” (or “curse”) to send the “Revenants” back to hell. These are demons who Wyatt Earp killed and they return every XX number of years (I think 17, but I’m not quite sure.) The demons are trapped in the town of Purgatory and are trying to find a way out before they’re killed by Wynonna.

Both shows have a solid cast of supporting characters who are interesting and have backstories (or a hint of a backstory that will be revealed as I finish the seasons.) And I love both Axel from VAN HELSING and Doc Holliday from WYNONNA EARP. They’re strong male supporting characters to the strong female leading character. (If I had to choose … I’d pick Axel. I like the what you see is what you get no-nonsense military guy.)

There are pros and cons to each show. First, Vanessa and Wynonna could be sisters. They have very similar personalities and even look a lot alike. If you told me the actresses were sisters, I wouldn’t be surprised. (They’re not; I checked.) This isn’t necessarily a bad thing, but I would like a little change up. They’re different enough that I’m not rolling my eyes. Vanessa is definitely more of a loner than Wynonna. She’s more serious, she’s more confident, and she’s more tortured (her daughter disappeared when the vampires took over.) Wynonna is younger (27 on the show, but she looks younger than my 21-year-old.) She was a rebel child, in and out of trouble, left home and never planned to return, but is kinda forced to. She recognizes real quick that she needs to take up the role her father had before she accidentally killed him when he was being tortured by demons.

Vanessa’s world is darker and bloodier — the storyline, the vampire world, individual betrayals. Yet it feels far more “real” to me than Wynonna’s world. Wynonna is “lighter” — she cracks jokes, flirts, etc. The created world is, though supernatural, a bit “lighter” and as such there’s a vein of humor and not-quite-believe-it emanating from each episode. I like that it’s sort of a modern day western — I have a soft spot for westerns. 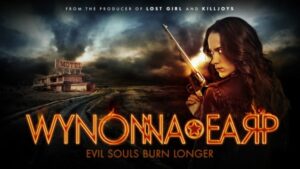 But the one big, big difference is how the title characters adjust to their new role (each being the only person who can stop the evil.)

Vanessa took to her role as vampire hunter slowly. She didn’t want it–all she wanted was to find her daughter. She fought being “chosen” doesn’t understand why she is, and some of the decisions she makes are real to that inner battle. We see through not only the actress but her actions that she’s struggling with her role every day. Yet when she’s forced to take charge, she does.

Wynonna SAYS she doesn’t want to be the Earp girl who has to kill these demons, but she jumps in with both feet. She doesn’t hesitate. While she’s reckless and makes mistakes, she seems to already know exactly what needs to be done. Maybe because she watched her father do it before he was killed when she was 10? Maybe because it’s in her blood? I just didn’t buy into it quite as much as I did with Vanessa. Wynonna’s actions were different than her words, and I wish there was more of an inner struggle with the character. Maybe there’s not supposed to be because the show is lighter and has more verbal humor.

Both shows have good actors. The pacing of VAN HELSING is a little off sometimes. I can’t quite put my finger on it, but during some of the ensemble scenes I feel like the actors are wait a beat too long to do what they’re supposed to do. It gets better as the show progresses. WYNONNA EARP has smoother pacing and snappier dialogue. And Doc Holliday — he has been SO fun.

BUT I am still drawn into each world. The female characters do what they need to do, adjusting to their roles as warriors. While they accept the help of others, it’s clear that they recognize that the Buck Stops Here. They aren’t damsels in distress. They don’t look for anyone else to save them, but they’re not TSTL (well, Wynonna has done a few things that I thought were really dumb, like shooting straight down to a metal bunker door flush with the ground. Hello! Vanessa’s TSTL moments were born out of her fear for her daughter, which is very real to me — she left the compound when she shouldn’t have, but did it for the right reasons, so I can buy into it.)

But what I like most of all is that these characters are still women. Vanessa in particular–though she fights and kills and makes tough choices — still has a deep maternal instinct that is partly driving her. They are both self-confident and independent women, but have questions and fears that are very real.

So I’m going to finish watching these two shows on the plane tomorrow. VAN HELSING will have a second season next year, and the second season of WYNONNA EARP is available on iTunes. I’ll buy it if the ending is strong … otherwise, I’ll wait for Netflix.