There’s a phrase writers use in the revision process: Kill Your Darlings. That a descriptive paragraph or scene, no matter how well-written or poignant or suspenseful or romantic or just plain stunning . . . if it doesn’t fit in the story . . . if it can be taken out without changing anything . . . has to go.

It’s the hardest thing a writer can do.

Because killing your darlings goes well beyond a well-turned phrase that may be repetitive, or a scene that is unnecessary. Sometimes in the slash and burn process of editing, characters need to go. And I don’t mean just killing them off in the middle of the book. I mean editing them out of the book completely.

Somehow, editing a character into nothing–completely erasing them–seems so much worse than murder.

I’m wrapping up my final round of revisions for LOVE ME TO DEATH, my January 2011 book starring Lucy Kincaid. Last night I had two major story decisions to make. The first was a series of scenes related to a character that my hero, Sean Rogan, has a confrontation with who subsequently ends up dead. The confrontation scene was fabulous–I loved the scene because it showed Sean being a hard-ass, and because Sean is a bit of a playboy and charming and always in a good humor, I wanted to show him being tough when it was warranted. And there was some great dialogue, too, a great back-and-forth that doesn’t always come easy to me. Then there was the discovering the dead body scene and being interrupted by the FBI. I really enjoyed the back-and-forth between Sean and FBI Agent Noah Armstrong as they butted heads, and then Lucy’s conflict of being in the middle of a crime scene while in the long FBI application process.

But . . . these scenes took up over thirty pages and while well-written and good, they didn’t truly advance the plot. There was no specific reason that Sean needed to talk to the dead guy before he was killed–he didn’t learn anything specific; and in fact, storywise, the guy needed to be long dead before Sean found him.

So . . . I cut all those scenes. And in cutting such a big chunk, I had to edit other scenes that were affected. But nothing changed storywise, and the revelations near the end of the book as Sean and Noah continue their parallel investigations (Sean is a private investigator) make so much more sense now! It’s as if subconsciously, I knew that these scenes weren’t necessary.

Sometimes, we don’t kill our darlings. One scene my editor identified that she felt didn’t advance the suspense plot enough, I decided to keep. I rarely disagree with my editor. In fact, I think the last time I kept an entire scene that she didn’t think was necessary was in THE KILL. But I understood what she meant, so I whittled the scene down a bit, and changed the lead-in to heighten the suspense even though the scene itself is not very suspenseful. But what it reveals about both my characters is, in my opinion, the best way to show the readers who Sean and Lucy are.

But . . . the book isn’t printed yet. The scene may end up on the cutting room floor. 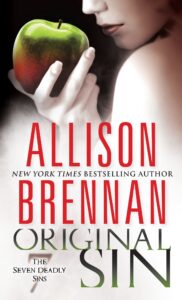 I’ve had to get rid of characters, too. Take Max Revere, a true crime writer who was supposed to be a major character in ORIGINAL SIN. I love Max so much I even bought the URL of his name so he could blog. (I’m not kidding!) I wrote him into the first draft, and my editor told me that she didn’t feel he contributed enough to the story. But I was determined to make him work because I Really Like Max. So I spent a lot of time reworking the story so he had a bigger, more pivotal role. And sent the revisions in, and my editor said he didn’t have a pivotal role, and that he detracted from the story. Reluctantly, very reluctantly, I edited him out of the story. When she read the final version, she said, “I know you don’t want to hear this, but Max was removed easily.” And he was. I’d spent so much time working on his scenes that he wasn’t integral to any part of the story. Just one more character in a large cast of characters.

I argued about it. I tried to convince her that Max was essential. That he was important. That I couldn’t cut him out with messing up the story. But she was right and I was wrong. He wasn’t missed, except by yours truly.

But I was determined to write him into CARNAL SIN. And I did–he had three scenes. They are fantastic scenes. He’s smart and shrewd and intensely loyal–and he doesn’t believe in anything supernatural. He’s also a flirt, in a quiet, soulful eyes kind of way. He just has to look at you and you melt. And he has an agenda, and you know it, and even though you know he’s not all one-hundred-percent good, you’re willing to go along with him because he draws you in in his search for the truth.

And my editor said that he didn’t contribute to the story. I didn’t even argue this time, because she was right, and I knew she was right even as I wrote the scenes. But I wrote them almost defiantly because dammit, I wanted to prove that he was important!

And now he ceases to exist, except in my mind.

Max Revere will be re-born, just not in the Seven Deadly Sins series. Because I had an epiphany the other day. Max doesn’t fit in a supernatural story. He needs to be the lead character in his own story. He’s too strong a character to be secondary to anyone. I’d had a couple ideas over the years, and when I read a snippet of something completely unrelated in a publishing e-newsletter, Max just clicked into place. I have his backstory, I have his first (and maybe only) book, and I have the set-up. It just . . . works.

So not every darling killed will be gone forever. While most of the scenes and snippets I cut from my book during the revision process I’ll never use again, they often give me ideas for future stories. Cutting doesn’t bother me. I’ll slash and burn my manuscript if that’s what it takes to make the story the best I can make it. I love the revision process, even when I have to make the very difficult decision to excise a paragraph, a scene, or even a character, out of my book. 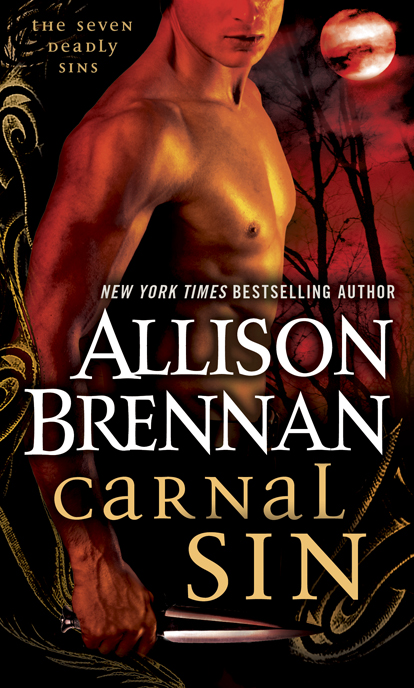 Now for a blatant piece of self-promotion . . . CARNAL SIN will be released on Tuesday, June 22! Yes, book two of the Seven Deadly Sins series is almost here. As regular visitors to MSW know, I loved writing these books. I needed to take a break from romantic thrillers, and writing two supernatural thrillers with a large cast of characters in a classic battle of good versus evil gave me what I needed to reignite my love for writing. I am particularly pleased with the blend of police procedure and the supernatural in CARNAL SIN. (For my fans in Australia, CARNAL SIN will be released down under on July 1.)

The weekly book buzz at Mania said in their review of ORIGINAL SIN: “Original Sin is yet another new series that is definitely more promising. Original Sin is much more grounded in the supernatural and mystery elements and other books of the same ilk. . . . Brennan masterfully builds suspense and horror in this genre-bending story. . . . All in all this was a strong start to this new series and one I’d recommend.”

I’m giving away a copy of CARNAL SIN. The winner will be announced this weekend. And if you don’t win? You can buy CARNAL SIN pretty much anywhere books are sold come Tuesday . . . or pre-order from Amazon, BN, Borders, or wherever you liked to shop! (Note to last winner of CARNAL SIN–I just got my books in, so yours is going out tomorrow!!)

Come out of lurkdom just to say ‘hi’ . . . or tell me what actor and/or actress you picture in the roles of Moira O’Donnell, Rafe Cooper, Anthony Zaccardi and Sheriff Skye McPherson . . . just for fun 🙂