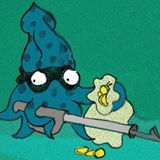 Left Coast Crime is fast becoming one of my favorite conferences, for three primary reasons:

1. Location. It’s on the “left” half of the country and much easier for me to travel to. Two years ago it was in Sacramento! This year … Monterey, a three hour drive. Much easier (and cheaper) than spending a day flying cross-country.

2. Intimacy. LCC is neither large nor small, it’s just right. I have the opportunity to catch up with old friends and meet new ones.

3. Readers. LCC is one of the few conferences that still is largely filled with reader — meaning readers who aren’t also writers.

LCC always has amazing guests of honor at their conferences. “Calamari Crime” set in Monterey recognized several fabulous writers … Louise Penny was the International Guest of Honor; Cara Black was the US Guest of Honor; and Marcia Muller and Bill Prozini were the Lifetime Achievement Award recipients. I’ve read nearly all of Marcia’s crime novels with her PI heroine … back when I was young and mom bought them from the Mystery Book Club. I’m kicking myself that I didn’t bring some of my mom’s books for her to sign!

Truth be told? I was not well prepared.

I drove down to Monterey on Thursday. This year, I was feeling stressed during the conference because I have a book due and I have page proofs due. I brought both with me, but had this nagging fear I wouldn’t be able to work on either. Fortunately, I found time to do both — On Thursday evening and Friday morning, I wrote about 25 pages total; then I spent Saturday morning working through the first 150 pages of my DEAD HEAT page proofs. While I didn’t get as much done as I would have at home, at least I made progress on both.

Thursday was also my publisher dinner … which was great fun. Good food, good wine and great company. We talked a lot about books (of course!) and movies and publishing in general. Here’s a view from the restaurant: 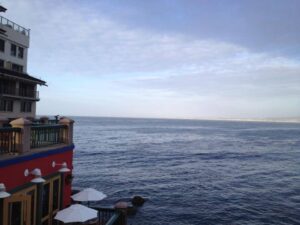 See where the tables are down below? We were inside the restaurant, on the other side of them. I love a good seafood restaurant!

Friday I was on a panel moderated by David Corbett — who I used to blog with on Murderati. The panel was about the nature of evil in fiction, and we had some great (and smart!) panelists. We talked about sociopathy as well as what turns sociopaths into killers, as well as villains who are three-dimensional … those who are not pure evil.

On Friday after my panel I had a nice lunch with friends old and new! 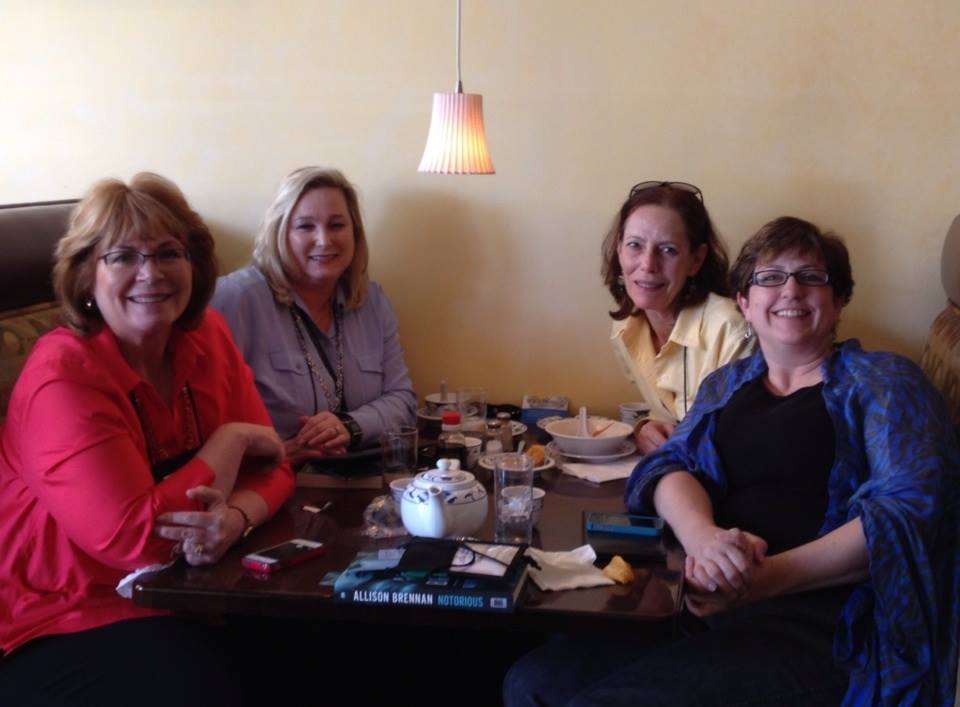 Friday afternoon I had developed a headache, so ended up in my hotel room early and didn’t partake in the barroom festivities … a sacrifice for sure! I caught up on CASTLE on my iPad and then fell to sleep early. Which was good, because Saturday was busy!

I went walking and of course got my Starbucks. I saw the sea lions, but didn’t take a picture … so I stole this picture from my friend Kelli Stanley (who’s also a fabulous noir mystery writer who sets her female PI in San Francisco!) Aren’t they cute? But loud … 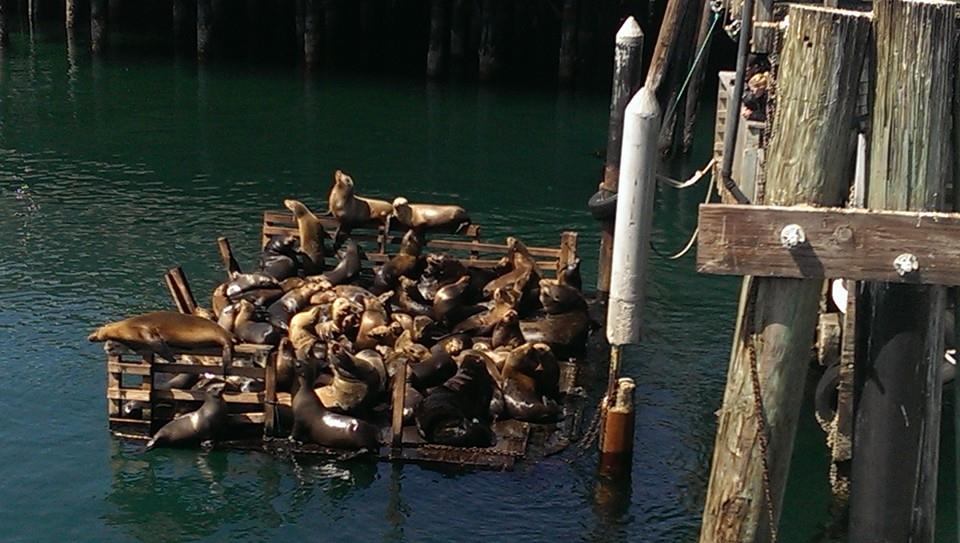 I socialized, bought books for my mom, and then had lunch with another great group of ladies immediately before the BEST PANEL EVER.

Okay, I’m biased. It was mine.

Two years ago, Deborah Coonts and I were on a sex in mysteries panel at LCC in Sacramento. At first I resented the fact that we were all women on a panel about sex … then Deb and I decided to have fun with it. We brought a bottle of champagne, popped the cork, and dished about everything from sex to sexual tension to relationships to how male authors get it wrong 🙂 We also pointed out that the level of heat in mysteries is different for all authors, and everyone should find their own personal comfort zone … as writers AND readers.

So this year, we did the panel again … adding Catherine Coulter, Diana Chambers, and Harley Jane Kozak to our panel. WOW did we have fun! I couldn’t stop laughing, and I think the audience had fun too. Harley is now writing about elves that look like the Helmsworth brothers. Just saying 🙂 And yes, we had champagne and a giveaway and lots of questions. 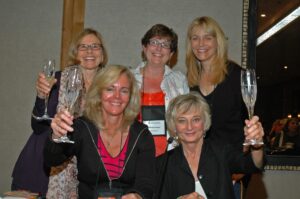 Saturday night was the awards banquet. I wasn’t planning on going, but it’s a “free” meal (meaning, included in the conference fee) and Brad Parks — who’s always funny — was the toastmaster. Had I read all the emails, I would have known that I could host a table and readers could choose to sit with me. Now THAT would have been fun! I’ll definitely do it next year. But, I still had a good time and met other writers and readers at my table, including someone who used to do film production for the Giants. 🙂 …. I left before the awards because I was getting antsy (another good reason to sit in the back!) and in the lobby got to re-connect with several of my thriller writer friends. Then hanging out in the bar? Also the highlight of the conference … I crashed early (midnight–I’m beginning to feel old!) but knowing that I have a book due and page proofs due means no extreme late nights … unless of course I’m writing.

I’m definitely planning on going to the next LCC in Portland. I can’t drive, but it’s a short flight, and I suspect not only will I have a lot of fun … but Deb and I will be presenting our sex in mysteries panel again. At least I hope they’ll ask us again …