LOVE ME TO DEATH — Exclusive Excerpts!

Characters make the story, and nothing is more important to a successful series than good characters. This is doubly important for a romantic suspense series. There are very few out there where the hero and heroine have a growing relationship over the course of several books. JD Robb’s IN DEATH series is perhaps the best known example. 32 books in (which doesn’t include numerous short stories and novellas!) and Eve Dallas and Roarke are still interesting characters who are working through their conflicts without losing sight of the fact that they love, admire and respect each other. All while battling the bad guys and solving a mystery.

Lucy Kincaid has a well-documented backstory. In FEAR NO EVIL, she was kidnapped on graduation day and raped live on the Internet and would have been killed if not for her brother Dr. Dillon Kincaid and rogue FBI Agent Kate Donovan. Fast forward nearly seven years and Lucy now has a Masters from Georgetown in Criminal Psychology and a degree in computer science, with a specialty in cybercrime. She’s interned for the Senate Judiciary Committee, the Arlington County Sheriff’s Department, and the D.C. Medical Examiners Office. She has her life planned out–every job was selected to make her more appealing to the FBI, she knows exactly what she wants to do for them, and she has a clear plan to get there.

Sean Rogan has a more interesting and, dare I say it, mysterious past. He’s 29, and like Lucy the youngest of a large family. Unlike the Kincaids, his family wasn’t close. When Sean was 14, his parents were killed in a plane crash and his older brother Duke came home to raise him. The other three Rogan offspring all live out of the country. They all have obedience to authority issues, except for Duke, and Sean has gotten into a whole bunch of trouble over the years. He’s broken a lot of laws, all for the right reason, and accepted the consequences. 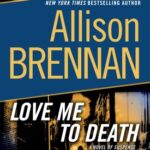 But instead of telling you about the hero of the Lucy Kincaid series, I thought I’d illustrate his personalities through excerpts. It was hard to pick pivotal scenes that don’t give away spoilers, but I think these work! (Though if you don’t like excerpts from the middle of the book, don’t read on.)

In LOVE ME TO DEATH, Sean is running his own investigation into the murder of a convicted sex offender parallel to the FBI—and is about to be called on the carpet for it. This scene from the middle of the book gives readers a clue as to why Sean is distrustful of law enforcement. Lucy is at work while Sean goes to Dillon Kincaid and Kate Donovan’s house. Dillon is Lucy’s brother, a forensic psychiatrist, and Kate is an FBI Agent who teaches cybercrime at Quantico. And my long-time readers will know profiler Hans Vigo, now an assistant director at FBI Headquarters, and close friend to the Kincaid family. Hans has been a secondary character in many of my books, starting with THE PREY.

Sean followed Kate down the hall. Like Lucy, she looked exhausted. Her hair was still damp from her shower, and thick sections fell in her face. She impatiently tucked them behind her ears.

Dillon was sitting at the kitchen table reading a thick file. A man of about fifty with glasses, a slight paunch, and graying hair sat across from Dillon.

Dillon glanced up. “Sean,” he said, gesturing to the stranger, “this is a good friend of ours, Dr. Hans Vigo. He’s FBI.”

“No, but my brother Duke—everyone at RCK— speaks highly of you.”

“Same as always.” Sean had been inching closer to see what Dillon was reading.

“Is that why you asked me here?”

“No, Noah Armstrong wants to talk to you.”

Sean abruptly turned to her. “You’re setting me up to talk to a Fed?”

It was Hans who answered. “You were seen on a surveillance tape entering a restaurant owned by Sergey Yuran. Considering his name has come up in the course of this investigation, we need to know what he said.”

Sean frowned. “If I learned something that would have helped, I would have shared the information with Agent Armstrong on Saturday.”

Sean didn’t feel comfortable talking to the Fed about something that could get him in hot water—he stood by his decision. He considered calling Duke for advice on whether to pull in a lawyer, but quickly dismissed the thought. He wasn’t going to lean on his brother every time he came head to head with law enforcement. He was a big boy, he would make his own decisions, and he knew he hadn’t been out of line in talking to Sergey Yuran. There was no way Yuran would have spoken to a cop, and if it was true he was under surveillance, Armstrong wouldn’t even be able to get in there. Shaking the trafficker down for the murder of a scumbag like Morton was way down on the priority list from trafficking in guns and human beings—which told Sean that Noah wanted this meeting off the record, hence here at Kate’s house. Maybe the Fed wasn’t the “by-the-book” hardass Sean had thought when he met him on Saturday.

Yet, every time Sean had spoken to cops in the past it had come back to bite him in the ass.

Before he’d been kicked out of Stanford, Sean discovered one of his professors liked child porn. Sean exposed his repulsive obsession so everyone would know what kind of pervert he really was. The Feds promised nothing would happen to Sean if he told the truth about how he’d hacked into the professor’s system and what initially tipped him off. Sean told the truth. Next thing he knew, Stanford expelled him for hacking into the school database. Duke had said the FBI did what they could, and Sean was damn lucky he wasn’t in prison. They’d agreed to expunge the record; however, Sean was certain his FBI file was an inch thick. The incident with the sick Stanford professor wasn’t the only time he’d been in hot water when trying to right wrongs.

Kate said, “Sean, you’d better watch yourself around Armstrong. He’s good, and he doesn’t like interference.”

“I didn’t interfere with anything.”

“I’m not going to rehash this. You know why I was there. I didn’t screw with his investigation.”

Hans said, “No one is looking to get you in trouble, Sean.”

Sean didn’t know whether to believe him, but Duke thought Hans Vigo walked on water, and that couldn’t be said of a lot of people, so Sean gave the profiler the benefit of the doubt.

“All right, but if Armstrong arrests me, you’d better be the one to post bail.”

Hans smiled. “I give you my word.”

In KISS ME, KILL ME, Sean and Lucy are looking for a missing teenager in New York City. A habitual runaway, they don’t know if Kirsten has run away again—or is in danger. When Sean tracks down a guy who partied with her the night she disappeared, he wants to make sure the college kid learns a lesson.

Sean waited across from Ryan’s apartment to sure that Trey didn’t circle around and go back. Sean considered going up himself—he didn’t think Ryan knew anything more, but he needed a lesson in how to treat women. Trey hadn’t quite figured out what “a little action” at a rave meant, but Sean knew exactly what Ryan was doing. Had he been the one to drug her? Would he do it again to another girl?

Sean crossed the street and went back up to Ryan’s apartment. He didn’t need to be buzzed in—the buzzer was a standard electronic gadget that Sean easily bypassed.

Ryan was leaving with a basket of laundry. “Hey,” he said, nervous.

Sean grabbed the basket and dropped it to the floor. He got in Ryan’s face until Ryan backed up against the wall.

“I don’t like you,” Sean said. “You use women without a thought.”

“I know she was high on something.”

“Everyone was. The drinks were spiked. It was a really wild party, but I swear, I didn’t give her any- thing. I wouldn’t do that! P-p-please believe me.”

Ryan tried to squirm away and Sean put his forearm across the skinny kid’s chest and held him there. “You may not have given her a mickey, but you sure took advantage of it.”

“I have a lot of friends. I’m putting the word out on you. If you ever show up at another rave and take advantage of another girl, and I find out, you won’t have a dick left to screw around with.”

Sean turned and walked away, confident that the kid believed everything he’d said.

And with Lucy, Sean is determined to teach her how to have fun. Lucy is serious most of the time, an “all work, no play” kind of woman. And Sean is a “work hard, play hard” kind of guy. He has just taught her to ice skate, both of them unaware that someone is watching them from the crowded outdoor rink. From LOVE ME TO DEATH:

She cleared her throat. “Why?”

“I suppose I’m willing to try anything once.”

“Once?” He frowned and looked worried. “You’re not having fun?”

“I’m having fun. Much more than I thought I would. You’re pretty amazing.” He grinned and winked at her, then kissed her cheek and nipped her ear playfully.

“All the better to impress you with, my dear.”

Lucy raised an eyebrow and glanced around Sean to make sure no one was in their way. She turned suddenly, in a full circle, surprising him, and he tried to regain control, but she’d gotten her “skating legs” and spun him until he fell on his butt. She grabbed the railing to keep from falling and laughed.

“So that’s how it is.” He grinned. “You’d better watch yourself, Ms. Kincaid, because payback is a bitch.”

“I can hardly wait.” She surprised herself with how easy it was to joke with Sean.

He got up easily enough and pushed her against the railing. His blue eyes sparkled with humor as he said, “You won’t know when or where, princess.”

“I’m so scared,” she said, suppressing a giggle.

He kissed her, opening his mouth slightly, warming her lips, sending a shiver through her body. His hands were on her face, his leather gloves cold but she barely noticed. He held her there, holding the kiss. His body pressed against hers and she was effectively trapped against the sidewall but didn’t panic, didn’t feel anything but the powerful presence of Sean Rogan.

He sighed, put his forehead against hers and whispered, “How about some hot chocolate?”

She nodded, because suddenly she couldn’t talk.

They left the rink and returned their skates. “Thank you, Sean,” Lucy said and kissed him spontaneously. “I haven’t had this much fun in a long time.”

LOVE ME TO DEATH is on sale today! It’s almost surreal, because I’ve been waiting for this date for a long time. I’m currently writing book three in the series, where Sean is the one in jeopardy 🙂

And don’t forget the contest Toni is running! The rules are here.