As you all might remember, I’d never watched BONES until the end of last year when I spent four months watching the first six seasons, one show every night except for President’s Day weekend where I watched the entire truncated season three when I was sick for three days. (You can read more about my thoughts on this show over at Heroes & Heartbreakers, where I blogged about how they screwed up Booth and Brennan’s relationship.)

I’d become so accustomed my new schedule of late night television, that when I was all caught up on my series, I needed something else to obsess over. I picked NCIS. I’m a little over halfway through the nine seasons of this show, and plan to be finished before season ten starts in the fall. I don’t know why I never watched this show before (well, I know … I gave up television for three years, from 2002-2005, and this premiered in 2003 … completely off my radar!) 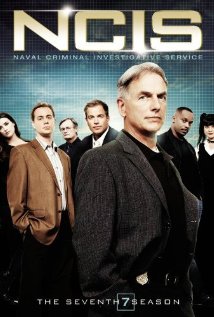 NCIS is the most watched show in the U.S., and I’m not surprised. It’s rare that I like all the characters in an ensemble show—usually there’s one or two I love above all others—but Special Agent Gibbs has a great team and it’s been so much fun diving into the series. It wins because of the characters, actors and writing, the key components of any successful show. (And it helps that the studio doesn’t skimp on production value.)

The show is both a crime thriller and a military thriller, plus includes a little psychology and a lot of forensics, two of my favorite things. But another thing I love is that the characters have complex backstories that are threaded through the series without being overwhelming. They don’t over-explain. Characters are flawed, they make mistakes, they get into trouble, they even break the law, but in the end, they are fighting for truth and justice–and they fight together, as a team. I can easily suspend disbelief and get sucked into the story.

My recent television series marathons have taught me a lot about writing. While I have more time and space in a book than script writers have for a 43 minute episode, I’ve learned a lot about pacing and story structure. I’ve also focused on character growth from season to season, and considered how to apply that sense to my own series. Lucy Kincaid needs to both grow as a character, but at the same time be accessible to new readers. The balance is hard, but watching shows like NCIS and how they integrate backstory and character for viewers new and old is a master’s class in storytelling. I also admire how character flaws can be strengths, and strengths can be flaws. For example, Tony’s love and memory for movies can be annoying, but his knowledge of plot helps on occasion to solve cases. Gibbs has made some questionable decisions, but always for the right reasons. I’ll admit, they’re my two favorite characters (though Abby is right up there, too. I like quirky!) No spoilers, because I’m only just beginning season six …

One show I’m thrilled is returning in the Fall is GRIMM. It started a bit rocky, but by episode three or four I was hooked. And of course JUSTIFIED will return … still the best show on television today! I’m considering NCIS: Los Angeles when I’m caught up on the original, but honestly? Over than L&O: SVU I’ve never liked any of the copies. (And I’ve always liked SVU more than the original.) Tell us what show you’re looking forward to returning next Fall, or a show you wish was returning. 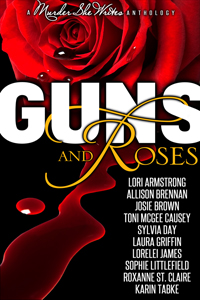 Now for a Mother’s Day gift from us to you! For the next week only, the Murder She Writes digital anthology GUNS & ROSES is on sale for $2.99. It’s a meaty, ten-story anthology penned by us, including both short stories and novellas—over 150,000 words of romantic thrillers and mysteries! Perfect for you or a mom (or even a dad!) who deserves an entertaining escape ….