It’s no surprise to long-time MSW readers that I love television. I use TV as a reward. I get my work done, I can watch TV at night. (Late at night, usually after midnight.) I haven’t watched commercials outside of football or kids shows because I no longer watch television shows when they’re on. I don’t even DVR them (and even if I did, they’d be quickly erased because of all the shows my kids DVR.)

I spoil myself because television is a reward. I buy the shows I like through iTunes.

A series can cost anywhere from $5 to $40, depending on the popularity, the number of episodes, and whether there’s a promotion. Most series, however, are between $20-25, less than the cost of waiting for the series to come out on DVD three months after the season is over. At $25, that’s the price of one movie and popcorn for a couple, and to me worth the price because not only can I watch at my convenience, I can re-watch.

But because I pay for television, when most people watch for free, I tend to be a bit more critical than I used to. My time is valuable, but so are my limited television dollars. I’ve very much appreciated that television, like much of the entertainment business, is making necessary changes: they’re releasing new series mid-season so summer is not just reruns; they’re running edgy and experimental series with both stars and young up-and-comers; they’re taking changes and cable networks are competitive with network. In fact, almost all my favorite shows are on cable, with only a few exceptions.

Some shows have blown me away—not just in the quality of production, or the actors, but the storylines are head and shoulders above most everything that’s out there.

Two years ago, I “discovered” JUSTIFIED and have evangelized for this show ever since. This year, I found HAVEN, a brilliant supernatural drama loosely based on the Stephen King book THE COLORADO KID. But today, I want to talk about LUTHER.

First: no spoilers! I’m only halfway through the short season two. But already, I am mesmerized by the raw, brilliant storytelling made even better by the quality of both filming and acting. I love it.

LUTHER is a psychological crime drama produced by the BBC. It’s set in England, and for the first episode or two I had to get used to not only the accents, some of which are quite thick, but the different police procedures in that country. (And, to be honest, I don’t even know if they get them right, but there’s a feel of authenticity so I’m definitely willing to go along for the ride.)

“Luther” follows the cases of a troubled yet brilliant English police detective, DCI John Luther (Idris Elba). Separated from his wife, whom he loves passionately, he is torn between an unrelenting approach to solving serial killings and his attempts to rekindle his marriage. Luther is a highly charged emotional man who is not above stretching the law to solve a case or save a life. In episode one, Alice Morgan (Ruth Wilson) proves she is equally brilliant by committing the perfect murder of her parents, which challenges Luther as never before. Alice develops a strange fascination for Luther and their continued exchanges and interplay serve as a backdrop for the rest of the season. Luther’s edgy police tactics make him a serious concern to his superiors, who feel that he is a threat to their reputations and that of the Police force. From the opening credits to the end of season one, “Luther” is a fast paced mystery presented with many plot twists and insights into the human psyche.

The scripts are tight, gritty, and multi-dimensional. The filming compliments the tone and feel of the show. A crime drama like CASTLE is lighter, with brighter colors and a deeper hue, but less contrast and artistic framing. LUTHER, which is a much darker show, is as overcast and gray as England’s reputation. There’re no bright colors, but the sharpness of the imagery even in the grayness adds depth and emotion. (I’m sure Toni, or resident photography expert, would be able to explain all this better than me.)

But to be honest, Idris Elba, the actor who portrays DCI John Luther, makes the show. Not only is he a physically imposing character compared to all the others around him, he is a flawed and tragic hero.

I’ve been thinking about this show a lot while teaching a class over at the Kiss of Death chapter this month. Participants have been asking a lot of questions about how to create flawed characters that readers will still like. Today, I pointed them all to John Luther. 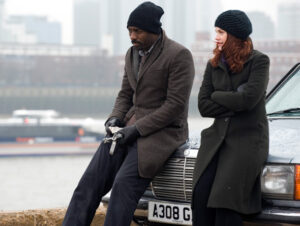 In the first episode, he’s coming back to work after being on administrative leave while being investigated for the injuries a suspect sustained while Luther pursued him. The suspect, a child murderer, is a loathsome person. Did he, or did he not, wait a fraction too long in trying to save the killer from a fall? While the killer is on life support at the hospital, Luther is investigated. The day he returns, he’s called to investigate a double homicide, introducing him to Alice Morgan, one of the most complex and compelling psychopaths created in a long, long time. The intelligence of Hannibal Lecter without the crudity and rather disgusting habit of cannibalizing his friends.

Luther is far from perfect. But what draws me to his character is that he it’s his drive to do what is right for others that ultimately puts him into danger or forces him to choose between two morally or ethically reprehensible choices. Sometimes, there is no good answer, only a lesser evil.

Luther is a brilliant cop. Sherlock Holmes without the arrogance or drug habit. He doesn’t smooth things over or play nice just to get along, but he’s not deliberately or intentionally abrasive. He’s extremely loyal, and his loyalty is also his Achilles Heel. 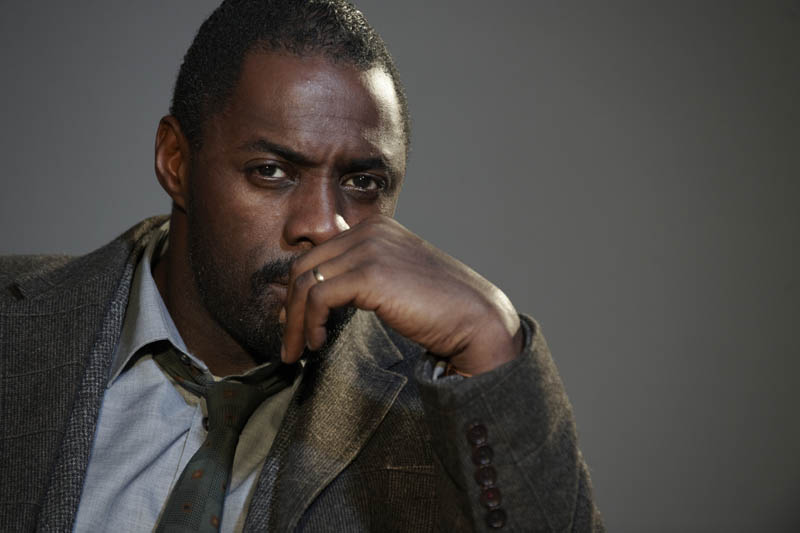 For example, in the second season he’s guilted into helping an underage prostitute get out of a vile fantasy rape (where a pervert pays to rape her, but where often the prostitute is killed in the process.) Guilted because, while underage, she’s still 17 and as Luther said, she’s made her own choices. She chose to do drugs, to be a prostitute and to leave home. But, as her mother says, Luther drove her to drugs and prostitution because he arrested her father for “accidentally” killing a prostitute, and while in prison he killed himself. Luther goes to the location, talks to Jenny, she doesn’t want to leave, and he walks out. The agony of his decision is evident on his face you can almost hear his internalization.

It’s Jenny’s choice. No one is forcing her.

She’s too scared to leave. She’s going to be killed. She’s only 17.

In the end, he walks in and grabs her while she fights him.

That decision sets up a whole chain of events that are still playing out as I’m about to watch the third of four episodes.

Luther does many illegal things, always for the right reasons. His ethical dilemmas are complex and torture him. Luther is an amazing character, and while Idris Elba deserves much of the credit for his creation, the show itself is truly a well-done masterpiece blending the lead character with an equally talented supporting cast, and compelling, top-notch writing. Crime drama lovers, you won’t be disappointed. And writers? You’ll learn a lot.

It doesn’t get much better than LUTHER. I am hugely thrilled they have contracted for a third season. Two, four, six, ten episodes — I’ll take whatever they want to give me.