I’m thrilled to welcome Boyd Morrison to Murder She Writes! He writes fabulous action-adventures that take place all over the world with impeccable research and larger-than-life characters you can root for. I particularly love his hero Tyler Locke. Because I really enjoyed THE LOCH NESS LEGACY, I’m gifting a digital copy to one lucky commenter — just say ‘hi” to Boyd! (And I think you’ll agree, after you read the following, that Boyd is the hero of his own romance novel!) ~ Allison

Writing can be a lonely job, just you and the computer for hours a day (the voices in your head don’t count). But eventually everyone needs some kind of collaborator, whether that’s a co-writer, a writing group, an agent, or an editor. I’m lucky enough to live with mine.

My wife, Randi, is the first person to read every sentence I write. She’s there for the late night sessions when I’m wracking my brain for the next plot point or how to get my characters out of a sticky situation. And she’s heavily involved in the business side of my career, to the point that I can’t even go to a writer’s conference without her any more or I’ll never hear the end of it from the other attendees since she knows just as many writers as I do now.

The best part of the collaboration is when she gets to come along with me to do research for my international adventure novels. To research locations for my latest book, THE LOCH NESS LEGACY, she accompanied me on a two-week trip to England, Scotland, and France (granted, I didn’t exactly have to twist her arm). She was a trouper to spend hours helping me scout settings, take hundreds of photos, and listen to me pitch ideas about what would happen in each place. She has helpfully suggested that perhaps my next book could be set in Fiji.

When we travel, we aren’t satisfied tramping around castle ruins and tourist hotspots. We also crave excitement. Randi, who is both a physician and an aerial acrobat, has shown me that shrinking-violet damsels in distress aren’t nearly as interesting as kick-butt take-charge women. I have no doubt that she would be up for the challenges the women in my books face. She’s gone bungee jumping, scuba diving, zip-lining, and whitewater rafting with me, and that had nothing to do with writing; it was just for fun.

In researching another novel we climbed the Sydney Harbour Bridge and rode in jet boats down a narrow canyon, both of which ended up serving as settings in action scenes. We’ve galloped through a London park for a horseback chase scene I was planning. But she’ll never let me live it down that I drove on the autobahn at 150 mph without her. I’m sure she would have gotten the car up to 160.

If it seems as if my writing is just an excuse to take tax-deductible vacations with my wife, I have to admit that it’s not a bad perk. But I think the key to success in any field is finding a good support system, people who will be behind you all the way in whatever endeavor you want to pursue. When we got married, I had no idea I would become a full-time writer, and Randi had no idea she would become a doctor. It’s safe to say neither of us would have gone those routes if we didn’t have each other to encourage us. We were in this together. Because of that, the writing job hasn’t been so lonely.

Allison again … I greatly admire Boyd and all he’s accomplished. I rarely post author bios, but Boyd’s is so interesting I had to share (it’s below) — and then maybe you can share a little known tidbit about yourself! 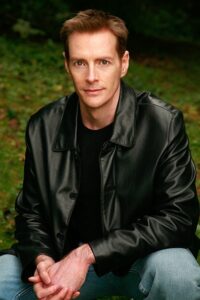 Boyd Morrison is an author, actor, engineer, and Jeopardy! champion. He started his career working on NASA’s space station project at Johnson Space Center, where he got the opportunity to fly on the Vomit Comet, the same plane used to train astronauts for zero gravity. After earning a PhD in engineering from Virginia Tech, he used his training to develop thirteen US patents at Thomson/RCA. Boyd then managed a video game testing group in Microsoft’s Xbox division before becoming a full-time writer. For non-fiction thrills, he enjoys white water rafting, skiing, scuba diving, and bungee jumping. Boyd is also a professional actor, appearing in films, commercials, and stage plays. In 2003 he fulfilled a lifelong dream and became a Jeopardy! champion. He currently lives in Seattle with his wife.