My first book THE PREY was released on December 27, 2005 and my 30th book, MAKE THEM PAY, will be released on March 7th … only 3 short weeks away. I can write anywhere, by necessity, but I’ve never been on a writer’s retreat before … (You can click through to MAKE THEM PAY for all the pre-order links and whatnot!) 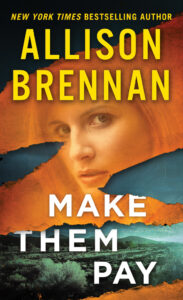 Before I sold my first book, I worked full time in the California State Legislature. And, I had kids. At first three … then four … and then five. Before I sold, I wrote at night after the kids went to bed. They were younger and I had a den in the house, so I could close off from the world and write for three hours every night after they went to bed, before I crashed for six hours. Then I’d wake at six a.m., get the kids off to school or daycare, and commute to work. It was a gruelling schedule, but I knew it wouldn’t be forever. My dream was to make my living writing fiction, and I knew that to achieve that dream I had to work my ass off for however long it took.

I quit my day job three years after I seriously started writing. By that time, I had the five kids and no longer had a den. I moved my desk into the living room, but that afforded no privacy. I’ve always been able to work with noise … it’s the interruptions that kill me.

So I started writing at Starbucks. Or a pub. Depended on what time of the day (or night) it was.

Elk Grove Brewery had the best porter I’ve ever had … unfortunately, they closed a few years back.

I ended up writing books 4-10 outside of the house, in the hustle and bustle of Starbucks or my favorite pub (which has since closed) or BJs restaurant. There were times, in fact, where after I got the kids fed, I’d head to Starbucks at six or seven at night. Write until they closed at 10, then took my laptop to BJs and wrote in the bar until they closed at one. Went from 4-shot lattes to margaritas or wine. It worked for me! I had a rock playlist on my iPod and could shut out the commotion around me.

In the middle of writing book #9, we moved to a bigger house where I had an office again. It took me awhile to adjust to writing in the middle of inaction … but I adjusted. Now, I much prefer writing at my desk than anywhere.

I also prefer having uninterrupted writing time. Three hours is the turning point … if I know I have less than three hours to write, I’m not that productive because time feels like it’s against me. More than three hours, and I can jam. But what I like isn’t always what I can do.

Mary at bat at a tournament her team won last November … her first tournament this year starts March 4th!

I have kids. Kids have activities. Sports. Plays. Detention … sometimes, I can’t be at home, but deadlines don’t wait for my comfort. And sometimes, ideas come and I need to jot them down.

Over time, I have learned to write anywhere. I have an iPad with a keyboard — much easier to take anywhere with me. My youngest daughter Mary plays competitive softball … and any parent who has kids in sports or drama knows that it’s a lot of sitting around. It’s ridiculous to drive Mary 30 minutes for a 2 hour practice and then go home. So I started writing either at the softball field in the stands, or finding the nearest Starbucks (or bar) to work. Adjusting my writing locations has greatly improved my output. And even though I have 2 hours tops to write, I’ve forced my muse to adjust so that I don’t get antsy if I don’t have three hours set aside.

Some other adjustments I’ve made:

Copyedits for SHATTERED … already back in NYC!

I read most of my books outloud during the copyedit or page proof stage — especially the dialogue. That’s one thing I can’t do in public!

But even though I’ve written in a multitude of places and times, I’ve never actually gone on a writing retreat. I’ve locked myself in my office for a weekend and banned the kids; I’ve threatened to check into a hotel if the family didn’t leave me alone, but I’ve never actually done it.

A few months ago, I was invited to rent a huge house in NOLA with several other authors for the purposes of WRITING. Every day we have quiet time, where the goal is to create.

I’m both excited and scared. Excited because I love the idea of having no other responsibilities for a week. No driving to and from practices or school. No cooking. No cleaning (well, I don’t clean, so that’s never really a problem for me …) No telemarketers calling, no grocery shopping, no last minute school projects (Mom! I need a science fair board tonight!). Next week is the perfect time in my life for it, too. I have a book I’m just starting, but all the research is done. I have a novella half-written that I know I can finish in two days if I focus. And there’s nothing major going on in the lives of my children.

But it’s a little intimidating because I’m spending money to get away to write … and what if I’m not productive? What if I get caught up in the scenery and avoid writing?