One more week and COLD SNAP will be done. It’ll need revisions and copyedits, but the story will all be there — if all goes well. Last night, I wrote a new prologue. I had one already drafted, but it nagged me … I just didn’t like it. It didn’t show my heroine, Elle Santana, the way I wanted. She has a very strong motivation for doing what she’s doing, and the original prologue didn’t show that. The new one does — a teenager she’s been helping dies in her arms of a drug overdose after being thrown from a car. Originally, it all happened off-page. But I realized half way through the book that it needed to happen on the page. And I think it works.

But my book is not the only thing that’s ending … it’s coming up on television endings! Season finales, starting next week.

One more week until the season finale of THE FOLLOWING, which is my favorite new show this year. It had a slow start, but after the third episode, I was totally hooked. I will be watching the series again with my teenager Kelly because it is so, so, so good … and I’m going to use it as a teaching tool for my writing workshops. It has everything a good crime thriller should have — a flawed but motivated hero; a brilliant but psychopathic villain; a strong, well-developed supporting cast; a love-interest; strong pacing; high stakes; and unexpected twists. Just when I think Ryan Hardy does something that’s stupid, I realize that it’s totally brilliant. The writers of the show know exactly how to turn things around showing you what you need to know and nothing more … or less. Just … wow. 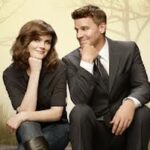 One more week until the season finale of BONES. BONES was an amazing show, but after season 5 it lost something … seasons 6 and 7 were off. Season 8 has rebounded. I think there were a couple issues. First, they waited too long to get Bones and Brennan together. As CASTLE has proved, a consummated relationship doesn’t ruin the show. (Season 5 of CASTLE is fantastic.) There is no MOONLIGHTING curse. The other problem with BONES was some of the storylines. The cast didn’t seem as engaged or … I don’t know. It just didn’t work for me. And how they got together was rushed and didn’t work in the context of where they were at that time. But, they’ve redeemed themselves (sort of) so I am looking forward to the return of Pelant! I love a good villain 🙂

One more month (or less!) for the season finale of NCIS (again, I didn’t like season 9, but season 10 is much stronger), GRIMM, CASTLE, ARROW and more. And after the cliffhanger on NCIS Tuesday night … well, let’s just say wow. As far as ARROW … this is a show that I want to like, but I wish it weren’t so preachy. I like the actors, though, and the stunts, so I watch every week it’s on … but it’s not my favorite.

One thing I love about the change in television programming is that when my favorite shows end … new favorites spring up. There are summer premieres. For example, last year I enjoyed PERCEPTION and LONGMIRE, both of which are returning. (yeah!) In fact, LONGMIRE starts the week after most of the finales. And then I hear that UNDER THE DOME, the Stephen King book, is being made into a television series. I’ll definitely be in line to watch that!

And, when my daughter comes back from college, we have to catch up on SUPERNATURAL. She made us promise not to watch it without her. Since I’ve been watching this show with my two oldest since season one, we’re waiting 🙂 … My number two daughter also wants to to get the GAME OF THRONES which we haven’t seen yet, and we have to catch up on THE WALKING DEAD. There’s just not enough time to watch all the television we want!

What summer show are you most looking forward to? Anything you love being cancelled? Any show you’ve been disappointed in this year … or just love?