First …. we have a winner! Thank you to everyone who commented on Lisa Gardner’s giveaway Tuesday … Random.org picked CRYSTALGB as the winner of the beach bag bonanza! Crystal, I sent you a private email, so make sure you reply! Congratulations!

Okay, now for some serious matters.

As long-time MSW readers know, I’m a TV addict. I prefer television to movies (with rare exceptions) and I’ve often commented about the amazing programming available today … unlike 10, 15 years ago when there was MAYBE one or two good shows worth watching.

One thing I particularly like is that there is no summer slump. No more downtime in TV land.

There are so many fantastic television shows that began in May and June that I’m in heaven. For example, the “oldies” — season two of LONGMIRE and PERCEPTION and season four of COVERT AFFAIRS, THE GLADES, and RIZZOLI & ISLES. And then the newbies, namely KING & MAXWELL.

There are more shows, I know. Those of you lucky enough to live in England are already enjoying LUTHER (grrrr) while those of us in the States have to wait a few more months. And then there’s the shows I don’t watch, either because I haven’t heard of them or they didn’t appeal to me. Often, I have to wait until I get feedback from someone before I invest the time in a television series, because — as I’ve said before — I’m an addict. And there’s nothing worse that to start a show that you think is going to get better, and you invest 2, 4, 10 episodes in it and it’s a total dud. 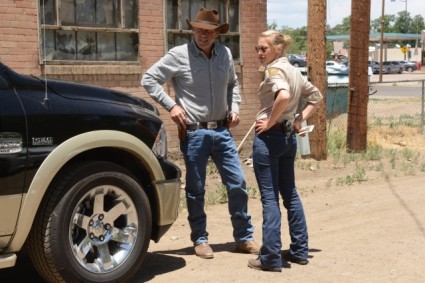 My two favorite characters on Longmire

LONGMIRE
I’m DVR’ing this show and am not caught up yet. I had to cut back on my iTunes bill which was getting kinda big. Based on a book series by Craig Johnson, this show follows a Wyoming Sheriff. It’s a modern western, with great characters and casting.

PERCEPTION
A different take on the typical crime show, with a paranoid schizophrenic who’s a genius and works with the FBI to solve cases. Because he has hallucinations, it makes the show doubly interesting, and because the actor (Eric McCormack) is so good in the role. It’s not my favorite, but I’m definitely compelled to watch it.

COVERT AFFAIRS
I haven’t started this yet, I’ll admit. This is a show I hate to love. I didn’t know it had already begun, so I couldn’t DVR it, which means I’ll have to go to Netflix or buy it on iTunes. But … knowing me … I’ll be doing it sooner rather than later.

He makes the show

THE GLADES
Here’s a show that’s hit or miss. I thought that after season three it was cancelled (it was an awful season, and the hero Jim Longworth, became a wuss. Season one was amazing, season two was okay.) But it wasn’t cancelled, and so far season four has everything in it that I loved about season one … the witty banter, Jim’s lack of political correctness and his blunt assessments that he has no hesitation in speaking. You know the phrase, “Larger than life character?” In fiction, a larger than life character will say the things you want (but won’t) say, and do the things you want to do (but won’t.) That’s Jim. I’m glad I scheduled it to record, because it’s one of my favorites this summer.

RIZZOLI & ISLES
Like BONES, I had to disconnect the books from the television show. I didn’t start watching until season two (though I bought season one first, and watched the first two seasons back-to-back.) It’s very easy to separate the show from the books because the characters are so different, and the show is more about relationships than the crimes. This season (4) is so far the best. 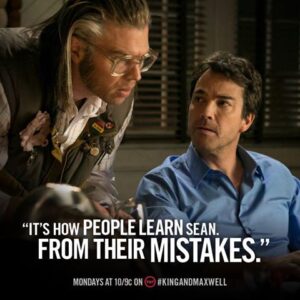 My two favorite characters on the show

KING & MAXWELL
This is a new series, and I ended up buying it on iTunes because I didn’t find out about it before the first airing. I rarely buy without a recommendation, and I thank my mother for the high praise. She is right. This show is a MUST WATCH for those of us who write series characters. Opens with action, complex mystery, compelling leading cast, strong secondary characters. I love it. Easily, this is my favorite show of the season. And, like LONGMIRE, RIZZOLI & ISLES, and BONES, it’s based on a series of books … this time by David Baldacci.

What show am I missing? Anything? Have you seen any of these shows? What do you think? 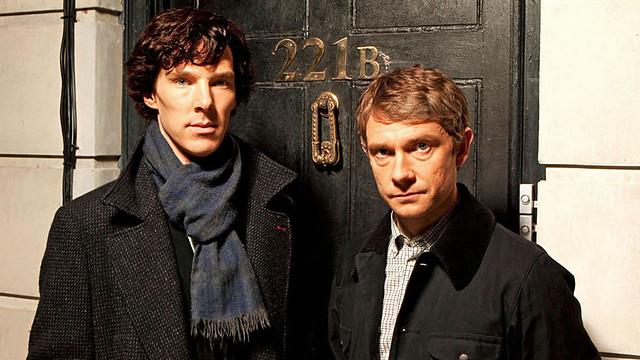 Oh, a little gossip here … I’ve been a closet fan of WHITE COLLAR. I don’t know why I never talk about it, maybe because it’s so … I don’t know. A guilty pleasure? But at Thrillerfest, Anne Rice said one of her favorite must-watch shows is WHITE COLLAR, so I’m coming out of the closet and announcing that yes, I’m a fan, I’ve seen every episode and am looking forward to season five.

As far as the fall … it’s no secret I’m looking forward to the BBC productions of LUTHER and SHERLOCK. In the good old USA, I’m most looking forward to GRIMM in the Fall and JUSTIFIED in the mid-season. I also have a “thing” for PERSON OF INTEREST, and now that they’ve (finally!) made it available on iTunes, I’m all caught up and will be adding season three to my collection as soon as it airs.

And then there’s SUPERNATURAL with the intense cliffhanger at the end of season 8 … I could go on. And on. 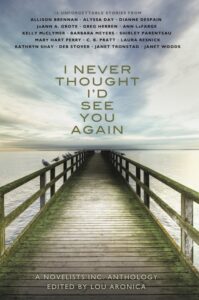 Now … for a minute of BSP (blatant self-promotion) … I have a novella in an anthology out this week called I NEVER THOUGHT I’D SEE YOU AGAIN. It was put together by Novelists, Inc, an organization for professional writers (meaning, we’re all multi-published.) We were given a theme — hence the title — and asked to write a story. As soon as I heard, a story popped into my head about a 15 year old street-smart girl who meets her father for the first time … under dangerous circumstances. To say I had fun writing “36 Hours” is an understatement … I like these characters so much, I’m writing a sequel.

This week, I finished half the other stories and can honestly say I’ve enjoyed them. Some are shorter than others, but each is a great take on the theme. So I’m giving away a copy to a commenter below! And you can talk about anything … what TV show you’re most looking forward to in the fall … what show you’re enjoying this summer … or maybe what you think of when you hear the phrase, “I never thought I’d see you again.”