I had a great blog idea I thought up when I was at RWA … and I can’t remember what it was. I should have written it down. :/ And then, I KNEW today was my blog day, but then I forgot. I posted our two new bloggers this week (Deborah and B.J.) and I guess my mind convinced me that I’d already posted my blog. So I’m really sorry that I’m so late.

By now, you’ve all heard about the RITA and GH winners, but if you haven’t you can read them here. I want to single out Darynda Jones, who won Best First Book in the RITAs as well as the Overall Daphne award (presented by the Kiss of Death chapter.) First Grave on the Right made it as one of my top five favorite books I read last year, and if you like your mysteries with a paranormal twist, humor, and great writing you should definitely pick this one up. In fact, I love this book so much I’m giving away a copy!

I’m taking a point of personal privilege today because I have a lot of news to share.

While driving down to RWA (an adventure unto itself, completely with a shredded tire and a repair shop right out of a Stephen King novel), I heard from my agent: St. Martin’s wants two more Lucy Kincaid books and two books in a new series I pitched — a series I have been thinking about for two years.

I’m currently writing the last book of my contract (STOLEN) which will be out at the end of April. Then I get a Christmas book! Last year, when IF I SHOULD DIE came out at the end of November, it was surrounded by all these feel-good Christmas books and I came up with an idea–the Kincaid’s all plan to be together at Christmas for the first time in two decades … if they can all make it to San Diego alive. Think Planes, Trains, Automobiles and Murder. I can hardly wait to write it. The next book will be Lucy’s first field assignment as an official FBI Agent. I think. I’m still not sure if she’s going to graduate the academy, because right now as I’m writing STOLEN she’s just made a big career-killing move. I’m just hoping she and Sean get out alive! 🙂

Then, two books with a character completely different from Lucy. Her name is Maxine Revere, but her (few) friends call her Max. She’s not a cop, she’s extremely independent, driven, intelligent, and tends to piss people off in her quest for the truth. I don’t want to give too much away yet, but once I’m done writing STOLEN I’ll tell you more.

My publisher has reduced the price of SILENCED to $2.99 for a limited time — just this month. If you haven’t read this Lucy book, or don’t know where to start in the series, this is a perfect option. Or, give it to a friend and introduce them to Lucy Kincaid.

I’m also really excited that I have my first, all-by-myself, original story now available digitally. I wrote MURDER IN THE RIVER CITY six years ago for the now-defunct Arabella Magazine. It was a serialized romantic suspense story in three parts, each that ended on a cliffhanger until the final chapter. Arabella never published it, and last summer I found a hard copy in my files. As I’ve had time, I worked on it–because my writing has greatly improved in six years! For example, I added in more scenes related to the two murders and greatly expanded the ending. In fact, the original 18K word story ended up being over 40K words, but it’s so much better. Then I hired my former Ballantine editor to edit it, and the amazing Amy Eye to proofread and format. It just went live yesterday at Amazon and Barnes & Noble — it’ll be up at Kobo sometime today, and I just got approval from the Apple Store so it’ll be on iTunes (I hope!) this weekend!

I also had to come up with “cover copy.” Usually, my publisher writes it and I tweak it. This time, I had to do it all by myself. Here’s what I came up with: 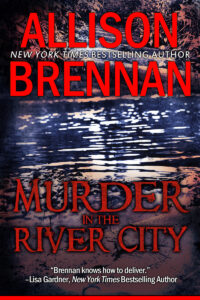 When the long-time bartender at Dooley’s Pub is murdered, the police believe a violent gang of thieves is responsible. But Shauna Murphy, Dooley’s fiery granddaughter, thinks Mack’s killer is someone she knows. In addition to stealing money, the thieves took her grandfather’s collection of autographed baseballs, leaving behind the only forgery. The lead detective doesn’t take her seriously, and Shauna reluctantly turns to long-time family friend, Detective Sam Garcia—the man who once broke her heart. But Sam has another murder to solve: the death of a young woman who was strangled and dumped in the river.

And your enemies closer …

As Sam digs deeper into his own investigation, he suspects that his case is linked to Mack’s murder. After an attack on Shauna leaves her shaken and angry, Sam vows to protect her. But he can’t defend her against an unknown threat. As time runs out with no one to trust, Sam and Shauna must work together to catch a ruthless killer before they both end up dead and buried.

Writing MURDER was exhilarating. Since I will have written six Lucy books in a row (interspersed only with an occasional short story or novella) I forgot how much fun it is to write a true romantic suspense where I get to meet new characters (and some old!) and give them a happily ever after. I have an idea for a story taking one of the characters from MURDER IN THE RIVER CITY, but he’ll have to wait until next summer.

TRIVIA: In MURDER, I bring in Detective John Black, who took the lead in my short novella “A Capitol Obsession” (now available in a digital collection KILLING JUSTICE.) John was also a secondary character in SUDDEN DEATH and FATAL SECRETS. In addition, the hero of FATAL SECRETS, ASAC Dean Hooper with the FBI, makes an appearance, as well as forensic expert Simone Charles.

Now, my kids have 2-1/2 weeks before school starts (I can NOT wait! I had them in summer day camp just for three weeks in July, but now they’re bored and think it’s my responsibility to entertain them! Argh! Though we’re going to see Spiderman tomorrow.) My oldest is going to college on August 23rd (Grand Canyon University in Phoenix — go ‘Lopes!) where she’s majoring in Criminal Justice. I’m going to have one kid in college, one in high school, one in middle school, and two in elementary. Two play football, one is in cross country, and one plays soccer. We are going to have a busy Fall … and then there are deadlines! But I suppose I wouldn’t have it any other way. Life is too short to be bored.

Remember the book I’m giving away? FIRST GRAVE ON THE RIGHT? Well let me know what your plans are for the rest of the summer … if you have any (we don’t, though we may take a day trip to the coast or to see the sequoias) Or, what’s your favorite movie of the year? Have you seen DARK KNIGHT RISING or SPIDERMAN? I love superhero movies, and THE AVENGERS was simply THE BEST. LOVED it (and saw it twice!)