Story is Character. That’s the famous quote from Robert McKee. Story is character. Character is story. Meaning, without character, you have no story. Your character drives the story, your character makes the reader invested in the story. Without a character the reader can relate to, at least on some level, or sympathize with, or care about, the reader will be dissatisfied. Yes, you can certainly write a fabulous bestseller without characters you care about (I can think of at least one thriller I read this year where I hated the characters and hated the ending, yet couldn’t put the book down), but it’s much, much better if the reader is rooting for your protagonist.

My characters either walk up to me, fully formed, and I simply tell their story; or they are stubborn and I have to write and rewrite to coax out their essence. Even fully-formed characters need work during revisions, to layer in the depth that makes a good story rock. But the stubborn characters — they take time. And sometimes it takes a lot of fighting with them to finally understand what makes them tick.

Last week I started writing COLD SNAP, the seventh book in my Lucy Kincaid series. I know Lucy and her boyfriend Sean Rogan extremely well. Writing their next book is like visiting with old friends. STOLEN, book six which comes out in June, wasn’t quite so easy. I was stunned, really–I’d already written five books with Sean as the hero, two books where he was a minor character before that, I thought I’d be able to write *his* book easily. The book where his past comes back to bite him in the ass. Except … I had to figure out what, exactly, he did in his past. I’d implied that he’d been a juvenile delinquent, readers already knew he’d been expelled from Stanford for hacking into the computers and exposing his professor as a pedophile, and I’d established that he could break into virtually any security system, which he did as part of his job testing corporate security for his brother’s company. But … I didn’t know, exactly, what events led him to commit crimes, to hack into banks, or what the fall-out was from his Stanford expulsion. It was both fun and difficult figuring all that out.

But still, through it all, I knew Sean, just like I know Lucy. Their character is established. I know how they’re going to react–what they’re going to say and do–in virtually any situation. While writing their books isn’t easy per se, it’s not as difficult as it once was because I know them so well. 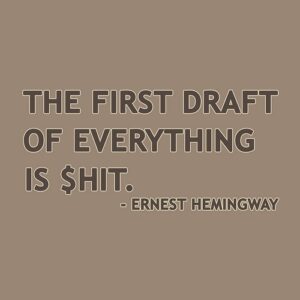 I don’t plot. I don’t create character charts, interview my characters, or figure out their favorite color or food. The details come as I write. The characters reveal themselves as they encounter conflict. I need to get the story out there, on the page, with all the inherent conflict that stems from the people and situations, and once it’s there I can focus on sharpening the raw material. I know things about my character that I don’t realize yet. I love writing, but writing is re-writing, and I love it just as much.

I’m at that point now in MAXIMUM EXPOSURE, the first book of a new series starring an investigative crime reporter, Maxine Revere. It took me awhile to get to know her — rewriting the first 70 pages over, and over, and over again. Her character is crucial, because if readers don’t like Max, they’re not going to stick around for a series about her. I think I was overly concerned about this, and it affected me — both for the better and for the worse. For you long time MSW readers, you might remember my post last year called Spear the Monster–about how doubt paralyzed me when I changed publishers (and, after seventeen books with one editor, moved to another editor.) Now that my new editor and I have three books together, I don’t have the same fears. My fears stemmed from doubting my ability to write a hardcover mystery/thriller. I think I focused too much on making it a “big” book with a complex story, rather than sticking to what I knew would work: character. I also had the fear that if I couldn’t get Max down right the first time, that somehow I would fail.

I spent today reading and re-reading the notes my editor sent me, and Max’s character is what I’m focusing on. There was a lot of positive — my editor pointed out that she’s not only interesting, but driven, results-orientated, and self-sufficient. All things that are true. But where I fell short was not showing how her choices in life impacted her emotionally–she needs to acknowledge, at least to herself, that her decisions and actions sometimes costs her. How does she feel about that? How does it impact her daily choices?

I thought I’d shown this well enough, but I think that because I was just getting to know Max while writing her book, I showed her actions without showing internal consequences. I need to show she’s self-aware. That while she’s willing to live with the consequences of her actions, she considers what her life might be like if she made another choice, and what she might be gaining as well as losing. I know so much about Max that hasn’t made it to paper, but that’s not because I consciously planned it. For example, I know Max has two tattoos. One is in memory of her best friend who was killed when they were on Spring Break in college. The other one … well, I haven’t seen it yet! I just know it’s there and she got it when she was 16. I might know it when I’m done with my re-writes. I know that while she loves her job–which she considers a vocation more than anything–she also laments that because she travels so much, she can’t have a dog. These tidbits I didn’t create — they came out of Max as I wrote about her.

I’m eager to dive into these revisions. All the other stuff in the notes related to plot (and too many characters! This is a common problem for me in first drafts …) but plot problems and clarity is easy. Taking three minor characters and making them into one stronger, more fleshed out character isn’t hard, either. For me, the most important thing is that Max is everything I know she can be–that even though she’s strong, self-sufficient, stubborn, and driven, she’s still vulnerable and human. It’s all there, in the book–it’s my job to make it clear, to make Max shine. Because hopefully, this is the first in a series, and that will only happen if readers like Max. Establishing her character from the beginning takes on a whole new level of importance. 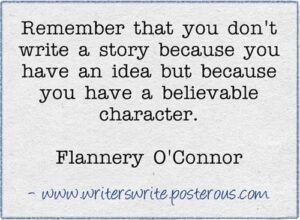 Character is always the most important part of writing — and revisions. Everything else flows from character.

Five Steps to Make a Character Leap Off the Page

There are some characters that leap off the page each and every time I read one of their books. J.D. Robb’s Eve Dallas and Roarke. Lee Child’s Jack Reacher. Robert Crais’s Elvis Cole and Joe Pike. Lisa Gardner’s D.D. Warren. And more. I always look forward to the next installment. What series character do you consistently look forward to reading?