ADDED 12.28: Whoops! the tinyurl in the TWITTER contest link comes here, when it should be going to a description of LOVE ME TO DEATH! Bad me. Here’s the correct link: http://tinyurl.com/2wel7a5

We usually take a break blogging over the Christmas season, so the MSW gals have graciously allowed me to pretty much take over the blog this week because my new book comes out tomorrow. And because it’s the first book of a series, it’s particularly important to spread the word. Even more so because this week is a heavy week in publishing–a lot of big books are coming out, and I’m small potatoes compared to most of these guys.

In the late 1980s/early 90s, romantic suspense was a thriving and growing genre. Then, in the mid-90s, the market fell out and only those authors who had reached some indefinable plateau survived and continued writing romantic suspense. (Jayne Ann Krentz, Nora Roberts, Linda Howard.) Some of my other favorite authors, like Susan Andersen, turned to lighter contemporary romance, or historicals, or another genre. Susan writes “light” romantic suspense, heavy on the romance and fun. I love her new books, but still miss her romantic suspense. She wrote one of my favorite heroes of all time, Sheriff Elvis Donnelly in EXPOSURE (which is being re-issued this coming April with a new–and much better–cover.) In light of my blog last week, I thought I’d show you the two covers. The new one, twenty years later, is definitely more contemporary for what romantic suspense readers expect today.

In the early 2000s, I was writing romantic suspense because it’s what I loved to read. I read THE SEARCH by Iris Johansen and THE THIRD VICTIM by Lisa Gardner, both published in 2001, while I was on maternity leave with my son. They were “first” books for me by those authors, and I glommed onto everything else they wrote. For Lisa, I because a life-long fan. (And was lucky enough to read her upcoming LOVE YOU MORE. All I can say is WOW. Two strong female characters and a race against time. I loved it.)

Something clicked with THE SEARCH and THE THIRD VICTIM–the books were dark and twisty and everything wasn’t wrapped up in a neat little bow, even though there was of course a happily-ever-after. But for me, they showed me that there were truly no limits in story and that I could write a suspense novel with a satisfying relationship. For me, that revelation was what I needed to give me permission to write—that and a swift kick in the butt. (By me—my theory is that before you sell, no one cares whether you write or sell a book, except you. YOU have to want it bad enough.)

My writing really took off. It took me awhile to discover my voice and hone my skill and learn (and I’m still learning!) but those two books and how the stories were told impacted me in a way that I could practically taste. I was excited about my writing, where it was going, and the ideas battling in my head.

When I joined RWA in early 2003, I was told by both published and unpublished writers that romantic suspense was “dead” or “difficult to sell” and I should target Harlequin because they published more books and had a romantic suspense line. Well-meaning people—many published authors—told me that all the great romantic suspense and suspense authors started in Harlequin: Nora Roberts, Lisa Jackson, Tess Gerritsen, Lisa Gardner—and more. The problem was, my voice wasn’t a category voice, nor did I have the gift of writing complete and satisfying stories in the shorter word count. Category writing isn’t easy, and I didn’t know how to modify my natural voice to fit the requirements. So I continued writing 100,000 word romantic thrillers and figured someday I would sell. (I mean, if I were a man would anyone tell me I had to start at Harlequin because they publish more books?)

I sold in March of 2004, but THE PREY wasn’t released until December 27, 2005. During that time, Mariah Stewart—who was kind enough to give my debut a fabulous blurb—had great success with a back-to-back trilogy, so our publisher decided to try me as a b2b2b debut author. I wasn’t the first b2b trilogy published—many came before me. But I believe I was the first debut author, so it was a risk for Ballantine, as well as me. It paid off when the books did well, partly (I believe) because of great covers, a strong marketing campaign by Ballantine, and the surge in romantic suspense sales. My books came at a time when there were only a few romantic suspense authors consistently publishing—after the fall of the genre in the mid 1990s, many authors reinvented themselves or stopped writing. So I filled a void—something that no one can plan for.

Romantic suspense has become it’s own genre, and is blended in with other genres. Even in contemporary romance books, there is often a mystery or a minor suspense element that is developed through the book. It may not be a suspense core, but it’s a subplot that gives readers their fix. Romantic suspense, as a genre, may be a little bit sick today, but it’s in no way dead or dying.

My brand romantic suspense tend to fall firmly on the suspense/thriller side of the equation, but I still need a happy (or happier) ending. I don’t need my hero and heroine to ride off into the sunset at the end of the book, but I need them to be in a better place. For Lucy Kincaid and Sean Rogan, each book will bring them to a different, and stronger, point in their relationship. The readers will know they love each other, but each book will build on that and they’ll have important and realistic issues to work through. One reason I love J.D. Robb’s Eve Dallas and Roarke (other than their great characterization!) is that they have believable conflict but the reader still knows that they are in love. I hope to achieve that with Sean and Lucy.

Romantic suspense may have dipped, along with much of the book market across the board, but it’s very much alive. It’s still a genre that readers enjoy, and I suspect that any dip will be made up down the road as popular fiction sales are cyclical. Which is good, because I can’t imagine writing anything else.

And now, for an amazing contest that our own Toni is running for me!

Here are the rules per Toni:

If you’re on Twitter, this one’s for you. Contest starts on December 28th and continues through midnight, January 3rd, central standard time. All you have to do is tweet or RT this exact tweet:

RT with #LMTD & b eligible to win ereader: Can’t wait to read @allison_brennan’s new thriller LOVE ME TO DEATH http://tinyurl.com/22kpem2

BE SURE the hashtag #LMTD is in there for me to see your entry.

One entry per twitter name per day makes you eligible to win either a Kindle or a Nook Color—whichever one you choose (see the links for the specific model) if your name is drawn in the random drawing. Plus, the winner will receive a $50 gift certificate to the ebook store their reader came from in order to help get a jump start on purchasing books for their new ereader!

If there are more than 1,000 entries (remember, one entry per person)—there will be TWO prizes given away, so spread the word, but let them know they have to tweet that exact tweet, okay?

Contest void where prohibited. Any winner who happens to be outside of the US may opt for the cash equivalent (via Paypal) of the Kindle ($189 USD) + the $50 cash (also via Paypal—for a total of $239 USD) if they cannot use the Kindle or the Nook in their country.

Winner(s) will be announced on my Facebook page, as well as on my blog on Monday, January 10th, by 5 p.m. (CST) and on Twitter—so follow me there if you want to see it there. (I’ll post it to Twitter first.) 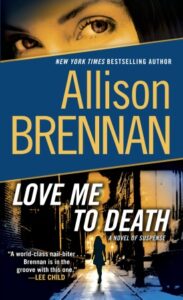 You can read an interview I did with Toni yesterday at Murderati. She asked HARD questions! And tomorrow, right here to celebrate the release of LOVE ME TO DEATH, I’m posting exclusive excerpts from LOVE ME TO DEATH and KISS ME, KILL ME—insights on the characters Sean Rogan and Lucy Kincaid.

Now for the fun stuff. Tell me . . . did you get an e-reader for Christmas? If so, what’s the first book you downloaded? If not, did you give or get any books for Christmas? What were they?