It's Not Premiere Season Anymore

We all remember when September brought the launch of all our favorite television shows. The season of re-runs was over. Every major network launched their slate of new and old favorites, building up to it generally starting with a cliffhanger during the season finale (like the end of NCIS Season 9 where NCIS headquarters is blown up–with most of our favorite characters inside.) We wait in anticipation all summer, through re-runs, through teasers, until the season opener.

And while we still wait for our favorite shows, no longer do we have to wait for everything. There’s always something new starting. Television programming has irrevocably changed.

We watch TV differently now than even ten years ago, and certainly differently than when I was a kid. I didn’t even have a VCR until I was 18, and now my kids barely remember what a VHS tape is. Now, we “DVR” shows, we program our television to record our favorites in order to watch at our leisure–and fast-forward through commercials. In fact, I haven’t seen a television commercial outside of children’s programming and sports. We have Netflix and recording and iTunes and Amazon and a host of other methods to watch our favorite shows when we want to–not when they are aired. 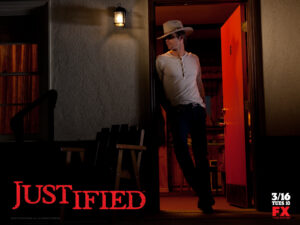 Network television used to be limited to ABC, NBC and CBS, but many years ago a couple “new” networks gained traction (like FOX, WB) and I started really liking the shows there. It’s a rare show that captures my loyalty on the big networks, and they often kill my favorites without giving them a chance (LIFE, FIREFLY anyone?) And then, a few years ago, I realized that my new favorites were on cable — JUSTIFIED, HAVEN, WAREHOUSE 13, and the new additions of AMERICAN HORROR STORY and LONGMIRE. Plus, with the BBC coming up with some amazing programming (SHERLOCK, LUTHER) I’ve been wholly satisfied with television, after years of dissatisfaction.

While networks still have 22-24 episode seasons, cable television runs primarily on 13-episode story arcs. They are shorter, and often bolder and edgy. Though the really edgy stuff is still reserved for pay stations (like HBO), more of it has leaked into cable (AMERICAN HORROR STORY, for example, is extremely edgy and different, both in the level of shock and content that it earned an MA-17 rating.) Network television has caught up in some ways, but one of the big changes is something we all benefit from: there is no real “launch” season. Brand new programming starts every month of the year, running across different seasons. When one show ends, another begins–no more boring summers.

We crave stories, in all mediums, from books to television to music to movies, so the variety and experimentation is exciting. But there are some downsides. We don’t have the patience that we once had because information is instantaneous. We miss an episode, we can download it or rent it or search DirectTV for the next showing. This instant gratification means we don’t always have the joy of anticipation or delayed pleasure. We want it? We get it. And often never have to miss a beat. Bittersweet. And the instant reward transfers to other aspects of our life–in relationships and the workplace. But that’s a topic for another blog.

Television has a high level of competition for our attention and all-important time. Such new, original programming and scheduling, and a re-commitment to quality (writing, acting, production) shows that television is stepping up to appeal to an audience that has more choices than it knows what to do with. But those of us who crave stories, who love great writing acted out by smart talent, get the benefit.

Here’s the promo trailer for GRIMM. The season opener definitely lived up to my expectations. My only complaint — I don’t like the opening credit clip. It feels thrown together, and the voice is all wrong. Boring, almost. And this show is not boring. I’m so glad it was renewed after being on the cusp last season!

There are many shows to look forward to. For me, that’s good news. I unwind at the end of the day (for me, that’s around midnight) with an episode or two of my favorite television show — what I want, when I want.