Technically, the Northridge Earthquake was January 17, 1994, but I’ve always equated it with Martin Luther King Day because the quake shook L.A. early that holiday morning — twenty years ago today.

I was living in Chatsworth, on the border of Northridge, exactly one mile from the Northridge Mall that collapsed.

I’m a fifth generation Californian from the San Francisco Bay Area. I’ve been through many earthquakes. Growing up, we had earthquake drills — get under your desk, hands over your head, until the shaking stops. When your teacher tells you, line up and go to the designated point outside — away from buildings and power lines. We practiced it just like fire drills. I’d been through some real big shakers, though lived in Sacramento during the Loma Prieta Quake.

I remember my old critique group. We were emailing back and forth in 2003 or 04 and Amy Knupp, now a successfully published Superromance author, said there was a tornado warning and she was going to the basement. All calm and reasonable. Being from California, I panicked. Tornado? Really? How can you be so CALM? She got back online from the basement, her boys were playing video games, and resumed chatting. Apparently, people in tornado alley have fully-furnished basements with food, a generator, water, radios, batteries, games — everything you need to ride out the threat.

It freaked me out. Most homes in California don’t even HAVE basements!

But people who don’t live with Earthquakes are scared of them just like those of us who don’t live with tornados are terrified. (I, personally, think I’m justified. Earthquakes and sudden, fast, and then you deal with the aftermath — sort of like a good apocalyptic book or a murder mystery. The damage is done, you live in a new world or solve the crime. But tornados are like living through a psychological thriller, with tons of tension and unknown. Is the hand of God going to hit your house? Your neighbor? A lot of waiting and waiting and waiting … and then you come out and see who got touched. Very nerve-wracking.

For me, the earthquake came five days after I gave birth, via C-section, to my first baby. She came early — which was good because she was due on January 18th. To get to the hospital, we would have had to go via the freeway — which had collapsed during the earthquake. Trust me, I would have probably gone into labor after the quake! It came early in the morning, and we were, ironically, up. I’d just nursed Katie but she didn’t want to go back to sleep. I asked Dan to check her diaper while I used the bathroom. He said she was dry and asked if it was okay to put the same diaper back on. I said yes. Then we both felt a whole house life up and down, like a big wave. Dan said, “I think that was an eart–” And then it shook. Hard.

I have no idea how my husband made it to the bathroom doorway with Katie (diaper less) and I was on the floor of the bedroom. The shaking put Katie to sleep, apparently, and the dog was also standing in the doorway with Dan. (And, in fact, during every aftershock for the rest of the time we lived in that house, the dog ran to that doorway.) 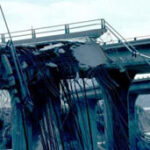 The next day, when my husband drove me to the airport so I could stay with my mom for a couple weeks, we had to use surface streets because so many freeways collapsed or had damage — it took 3 hours to drive what usually took 20 minutes. We had to lie about Katie’s age because apparently they don’t let infants less than 2 weeks on airplanes. When they wanted proof, we said her paperwork was in a pile of debris in our house (which it was.)

We had no power. No heat. The windows had all popped out of their frames, most of them breaking. All the dishes in the kitchen fell out of the cabinets and broke. The fireplace crumbled to a pile of bricks. We slept in my Bronco (the little Bronco II) that first night because of all the aftershocks. The baby Katie and me under nearly every blanket in the back, and my husband in the driver’s seat, the dog in the passenger seat, and the cat cowering under the seat. It’s no surprise I went to stay with my mom!

But still, to this day, I would much rather deal with an earthquake than a tornado. However, first opportunity I could move out of L.A., I did. We moved to Sacramento a year later and have been here ever since. We had a big flood (didn’t impact our house) but that was it.

What I’m working on: Untitled Max #2 (and thinking about titles!)
Next Release: Maximum Exposure, Max Revere prequel, on Feb 4.
Good News: I have several book signings lined up for NOTORIOUS — I’ll be posting them as soon as the last is confirmed. Right now we’re in El Dorado Hills, Menlo Park, San Diego, Los Angeles, and Houston. More to come!

What about you? Do you have a natural disaster story to share? I hope it has a happy ending.