So Many Ideas, So Little Time 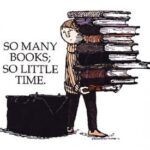 I’m sure most of you have seen the T-shirt with a mountain of books and the words, “So Many Books, So Little Time.”

We all have our own towering TBR piles. I’ve decided that when you get unread books together, they procreate, because that’s the only explanation I have for my growing TBR piles. I wouldn’t actually buy any more books when I have so many unread, would I? (cough)

I will never say I have too many ideas for fear of jinxing my muse and ending up with nothing. In fact, after I sold THE PREY, I feared I’d never have another good idea. Or if I did, I wouldn’t be able to write another publishable book. Or if I did, that would be the last, because I couldn’t come up with more than two good ideas for stories. I think part of me was scared of assuming I’d always have a book idea, and part of me was scared to think I wouldn’t recognize a good–or bad–idea.

I probably shouldn’t be scared of losing ideas. I have a pretty good knack now for knowing what will work and what won’t in my genre and with my voice. I have some ideas outside of my genre and some outside of my natural voice that scare me, however. For example, on one of my published author loops this week we were talking about Westerns. You see, I actually have a Gold Rush era romantic suspense idea very loosely based on the first known serial killer in America. (The first known serial killer, a killing pair, was far earlier than the Gold Rush era, and nowhere near the West. But since I’m a fifth-generation Californian, I’m more interested in California history and the Gold Rush and turn of the century San Francisco, so I thought I’d just bring the psychology behind those killers into the 19th century.)

I have another idea for a YA trilogy. It’s something I want to write someday, more because it’s a story I’ve been thinking about since before I even sold my first book (though I hadn’t thought of it as YA back in 2003, it has younger protagonists so would fit the YA mold very well.) The problem? It’s SF/fantasy. Yes, heavy on the suspense, because I don’t think I can write anything without suspense at its core, but still an epic fantasy.

Again, outside of my genre.

Then there’s my idea for a straight-up mystery series with a heavy dose of dark humor. I already can picture my hero and heroine, a married couple, and then I have to slap myself. I don’t write funny.

And those are just the ideas that don’t mesh with what I write now.

Daily, I have a snippet of an idea for a future Lucy Kincaid book. Usually I know if the idea is small (part of a bigger story) or the key plot. A couple weeks ago I wrote one paragraph for each of the next three Lucy books and sent them off to my agent. Two were fleshed out into full paragraphs; one was a single sentence.

When I first thought about the Lucy Kincaid series, didn’t have any ideas for her, just that her character would fit in a lot of different stories. Her past, her family, her personality, her intelligence, the way she looks at the world gives me a lot to play with. I thought, I have a couple vague ideas.

As I wrote LOVE ME TO DEATH, more ideas popped up. Some I dismissed pretty quickly, but others stuck with me.

And then there’s Sean Rogan, the hero of the series, who has a mysterious backstory of his own, bringing in more ideas that I wasn’t expecting.

I originally told my publisher that I could write three Lucy books, or more. There’s a natural turning point after book three so that if I didn’t write any more, my readers should be happy. But as I jotted down the next three core ideas, I realized I want to tell many more stories from Lucy’s POV. Now I have six core ideas (the first two books that are done, the third that I’m writing, and the three I’m proposing) and there are still other snippets that my muse is picking out of the creative well. Is she going to make it into the FBI? If she does, where will she be assigned? What squad? How will that impact her and Sean? Who will she work with? Will her past be more a help or a hinderance? What about her relationship with her brother Patrick and the guilt and regrets that remain even after seven years? Can she make it on her own, without her family? Is her growing friendship with Noah going to become an issue with Sean? And then there’s Sean’s brother Liam. Exactly why hasn’t he come back to the US in more than a decade? Why does Noah hate the Rogan family? Is it Liam . . . or Kane, the mercenary in South America? Or is it something else?

So many questions, so many ideas, so many possibilities!

KISS ME, KILL ME, book two in the Lucy Kincaid series, will be out on February 22. Here’s a little teaser from pages 41-42, right after Lucy begins to help Sean with his missing persons case:

She sent Sean the message, then realized she was still in her bathrobe and it was well after noon. She quickly dressed in jeans and a sweater, then jogged down the stairs to make a sandwich. She’d just taken her first bite when she heard the postman drop the mail into the box outside the front door. She retrieved it, sorting through bills and junk mail. In the middle of it all was a letter addressed to Ms. Lucia Kincaid from the Federal Bureau of Investigation.

Heart racing, excited and nervous, she quickly opened it.

Lucy stared at the single page. She didn’t blink; she didn’t move; she didn’t even read it twice. Her eyes were fixed on one phrase in the middle of legalese:

your application is denied

She refolded the single piece of paper, slipped it back into the envelope, and slowly walked up the stairs to her room, each step a small mountain, hands shaking, sandwich forgotten.

She fell onto her bed and stared at the ceiling, hope washed away along with her future.

She wasn’t going to be an FBI agent. Everything she’d been working toward for nearly seven years, gone. She was twenty-five years old and she had no idea what she was going to do with her life.

She squeezed back tears. How dare she even think about fairness! Her life had never been fair, but who in the hell had promised her it would be? Lucy could blame no one but herself. Kate and her friends and family had been fully supportive, doing everything they could to prepare her for the FBI. She’d taken mock written tests, gone through practice interviews, used the recommendations of high-ranking FBI agents to get her in the door—she had more advantages than most applicants, and she’d still failed.

It was on her, only her.

Today I’m giving away any book in my backlist, winner’s choice. Comment and pass it on! Writers . . . do you have too many or too few ideas? Readers . . . how many books are in your To Be Read pile?