I love speaking to kids. They’re usually attentive, interested, and full of questions. So when the opportunity arose to speak during Writer’s Week at my old alma mater, Menlo School, I jumped.

Menlo School is a college prep high school (with a middle school for grades 6-8) and honestly, one of the best schools I’ve seen. What I learned there in four years was certainly college prep–I read books that most people read in college, I was pushed to perform at an advanced level. All classes were, essentially, AP classes. They didn’t have any separate AP or honors classes, and everyone was expected to take AP tests in the subjects they were good at. I took American History and English Lit and passed with 4s. 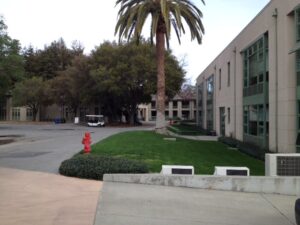 None of this was there 27 years ago …

The only public speaking class I took was my freshman year at Menlo, and I still remember Mr. Halverson telling me to “slow down.” I don’t think I learned that lesson well! I loved all my English teachers. I had Mr. Jones for freshman English and creative writing my junior and senior year. I don’t think he thought I wrote well … but what he did for me was introduce me to books and stories I would never have read on my own and to this day are among my favorite books. Our senior English midterm was on THE PRINCESS BRIDE. He said to read it three times because there were be three questions (two of which were essays) and each one would be worth 33.3% of our grade. Yikes! (I got an A. I still remember the five levels of the Zoo of Death!) This was before the movie, and I remember when he learned they were going to make a movie, he didn’t think they could pull it off. I had graduated by the time it came out, and I never did find out what he thought of the film.

Mr. Kubiak was my sophomore English teacher and that was American Literature, which I loved. We read from a huge book which had all the greatest (and some not so great) stories and books in American Lit. We read The Scarlett Letter and McTeague; we read Bartleby the Scrivener and Tom Sawyer and several Edgar Allan Poe. We also read a lot of poetry which has never been my favorite, but Mr. Kubiak taught me not to hate it. We were introduced to a breadth of great American lit that expanded my love of books and reading. He also taught me how to diagram sentences which I may not be able to do today, but I intuitively understand. I still have my original Prentice Hall Handbook for Writers that we used in that class! He also told me that grammar is a little old lady … and I never misspelled the word again 🙂

Sometimes, I wish I had been more mature in high school so I could have appreciated what I had when I had it. But as it is with many young people, I didn’t know or understand the wealth of knowledge I had access to. I should have continued playing soccer, I should have gotten more involved in the school. I did participate in the plays, but I wasn’t a great actor and never got big roles. But because my teachers liked me, they usually let me help out behind the scenes. (I also can’t sing, so musicals were definitely out!) 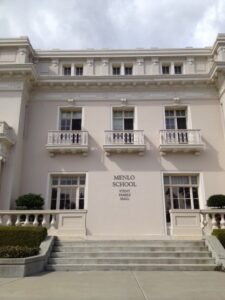 Now, Menlo has grown. There’s 890 students 6-12 — and an average of 150 in each graduating glass. I had 97 in my graduating class. There used to be just a couple buildings, mostly one story, plus Douglass Hall (now the Stent Family Hall after major renovations.) Now there are many buildings, all beautifully designed. There’s a creative arts center for art and drama, and a huge and beautiful library — we used to share the library with the college next door. It’s a little crowded, but maybe that’s just because I expected more space … or maybe because I was smaller then.

My speech went well. I talk to teenagers like I talk to everyone — I’m blunt, sarcastic, and honest. I tells stories. I tell them how I screwed up and how I didn’t. I also tell them that sometimes, you have to take that leap of faith and pursue your dreams — like when I quit my job without knowing if my books were going to succeed. So many kids today get wrapped up in expectations — and just as many get wrapped up in failure, in thinking they have no future. So you have the over-achievers and the under-achievers, and too often they don’t see what’s right in front of them, that there is a path, and you don’t need to know the end of it to start walking.

None of the teachers I had were still there, but considering I graduated over 25 years ago, that comes as no surprise! I wish I could go back and tell them how much I learned, even if it didn’t seem that I was paying attention. I only went to college for two years, but I learned far more in high school than I ever learned in college, and I know it’s because of the teachers and school I had.

Have you ever gone back to your high school after many years and what did you think?