Starting in the Middle of a Series

I love reading a series. It’s the same reason I prefer television to movies. I like revisiting my favorite characters, finding out what they’re doing, how they’re growing, how they’re going to solve the Next Big Crime. So when I had the opportunity to write the Lucy Kincaid series I jumped at it.

I knew from the minute Lucy survived her ordeal in FEAR NO EVIL that I wanted her to be a series character. It wasn’t until I wrote CUTTING EDGE six books later that I started to think that Sean Rogan might be the best man for her. He was cute, charming, smart, and fun. Lucy was pretty, intelligent, sad, and driven. They needed each other — Lucy to temper Sean’s wild “live in the moment” lifestyle, and Sean to make Lucy laugh. They are good for each other.

But when I started writing the first book, I originally envisioned a trilogy — maybe because I’d written so many trilogies I think in threes. I wanted to write as many books in the series as made me (and my readers!) happy, but I had a three book romantic story arc. I wanted each book to stand on it’s own — meaning, I wanted the mystery to have a complete arc in each book — but I wanted the love story to go beyond one book. In LOVE ME TO DEATH, Sean and Lucy meet and connect. In KISS ME, KILL ME, Sean confesses his love for Lucy. She cares for him, but holds back — out of fear, mostly, and her own insecurities. In IF I SHOULD DIE, Lucy realizes she loves Sean … only they have to survive before she can tell him.

I’ve started reading in the middle of a series — both the Stephanie Plum series (I started in book #3) and the J.D. Robb series (I started at book #7) and the Jack Reacher series (though he doesn’t adhere to a strict linear timeline.) Usually when I start a series I don’t go back and read the earlier books, though now I’m eager to read the first 6 books of the J.D. Robb series because a writer at the Desert Rose conference told me about something that happened in book 4 or 5 that I really want to read about.

I’m the same way with television. I may start a show in season 2 or 3, but I rarely go back and watch the earlier episodes.

As a writer, however, I’ve realized that sometimes when you get a lot of books in a series, you can lose readers because they feel like there’s a towering backlist that they’ll never be able to get to … so they don’t start the series at all. Which can be a death blow to a series.

I’ve thought a lot about this as I’ve structured the Lucy Kincaid series. Because I don’t plot, I don’t have anything beyond the chapter I’m writing thought out in detail. However, story arcs I have a general sense about.

The first three books of the Lucy Kincaid series were the falling in love books. Each mystery stood alone, but the over-arching storyline was how Sean and Lucy met, fell in love, and bonded.

The second three books focus on Lucy’s quest to be an FBI agent, and Sean trying to put his past behind him so it doesn’t damage her career. I also wrapped up a minor story line involving Senator Paxton that had popped up in several of the books. He was an interesting character who could have become a mentor or a hero or a bad guy. Maybe all of the above. But I realized as I kept bringing him into the series, I needed to resolve his role, so did that in STOLEN.

When I sold two more books in the Lucy series, I started to think about all the loose ends I had introduced in the first six books — and in fact loose ends from the NO EVIL trilogy where the Kincaid family was introduced. COLD SNAP was conceived because I wanted to give Patrick a story and reunite Lucy with her family. She’d kept them at arms length for a variety of reasons, and I wanted to bring them all back together. What better way to do that than giving them all a mystery? COLD SNAP is told in three parts, and was truly fun for me to write.

DEAD HEAT does that. 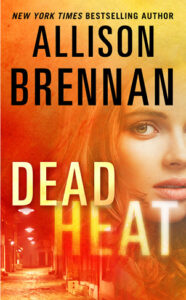 DEAD HEAT takes Lucy and Sean and puts them in a completely different environment. Lucy is an FBI agent — a rookie — in San Antonio. They don’t know anyone there. They have to meet people, make connections, get the lay of the land. Sean has to find a job, Lucy needs to prove herself, and they are living together for the first time — with no friends and family to interfere, or help. There are of course familiar characters because they both have large families and it’s inevitable that the past will be mentioned, as it relates to the current story. And in DEAD HEAT readers get to meet Kane Rogan, Sean’s older brother. The connections between the Rogan and Kincaid families started long ago, when Kane and Jack worked together. It’s nice to keep that thread going.

New readers can start with DEAD HEAT and, hopefully, not feel lost. And those who have followed Lucy from the beginning will hopefully be satisfied with the new world … and with finally meeting Kane. I know I enjoyed writing him! To me, it’s the best of both worlds.

If you’re a new reader, I think you can start anywhere in the series and not be lost, but some people really like to start at the beginning. You can start with the first book LOVE ME TO DEATH … or with book #4 (SILENCED) … or with book #8 (DEAD HEAT) which will be out on June 3. I think the books all stand alone, but I know that some people really, really like to read books in order, and from the beginning. For me? I like to read in order … but I’ll start anywhere. What about you?

Lucy couldn’t stop staring at Kane. He looked exactly like Sean, except older and rougher around the edges. He had the same dark hair—cut short—and the same intense deep-blue eyes, but hardened. He had the same dimples in the same places and even the same small mole on his right temple.

They had similar mannerisms, even though Kane was fourteen years older than Sean and had been in the Marines before Sean started school. The Rogan genes were strong.

Except . . . Sean smiled more. He didn’t have the hard lines etched in his forehead. Though Kane was fit, he was underweight, all hard muscle that wasn’t readily visible under his black T-shirt. Sean worked out in a gym and ate well, while Kane likely ate military rations and fresh food only when he could get it. Kane was a soldier through and through, his attitude more Jack than Sean.

It was clear that Sean both admired his brother and harbored an uneasy suspicion. Why? Because Kane himself was suspicious, vague, and tense?

Kane gave Sean a hug and slap on the back, then did the same with Padre. “Good to see you,” he said. He looked at Lucy, and she couldn’t tell if he was smiling or scowling. “So you’re Jack’s little sister.”

“Lucy Kincaid,” she said and extended her hand.

He shook it and said, “I’m truly glad to meet you. Jack is a good man.” The comment sounded like he was saying Jack is a saint.

Being able to re-boot a series, so-to-speak, has kept my love for Lucy and Sean. I’ve put together a team in San Antonio that I can’t wait to see more of. And the good news? Minotaur bought two more books in this series!