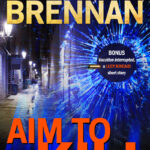 In 2002, I had just started writing. I wrote every night from 9-midnight — after the kids went to bed. Yes, I had to give up television, but in hindsight it was worth it. (Some nights, when I was tired and crabby and the muse was being a bitch, I considered vegging out in front of the television … but usually I didn’t cave in to the doubt demons.) My first book was a mess, an epic romantic suspense that had every possible romantic suspense trope on the planet, from a serial rapist to a virgin heroine to a stalker… Read More