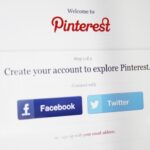 Fellow romantic suspense author Shiloh Walker introduced me to Pinterest when it was still in its beta version and participants had to be issued and invitation. I don’t know whether to thank Shiloh or curse her! I go through social media “phases” where sometimes I’m more active on Twitter, sometimes on Facebook, but Pinterest is one of those places where I visit at least once a day and just enjoy the visual aesthetics. Maybe I like it because I’m a visual person. I don’t have a fraction of the followers on Pinterest as the other social media sites, but that… Read More