The Next Best Thing

Sometimes, I’m at a loss of what to say. Those who know me well are laughing right now–Allison can always find something to say! But this week is upside down. It’s release week. I’m woefully behind on my schedule. I’d planned on going out to local stores and signing stock today, but didn’t because I’m reworking the last 100 pages of CARNAL SIN, my July release. And I’m not done, so tomorrow, no stock signings either. And I’d wanted to get a newsletter out Tuesday, to announce that ORIGINAL SIN is on sale . . . but that, too, fell by the wayside because of these revisions. And this morning I woke up with a mild sore throat. I’m fighting it with zinc and Airborne (take THAT you damn germs!) and so far . . . it hasn’t gotten worse. That’s a plus!

There are always so many things I want to do release week, but there’s that little thing of only 24 hours a day. And this Tuesday, the day my book came out, we had back-to-back-to-back-to-back-to-back (yes, five) basketball games. I made it to three and a half–catching both my daughters, the varsity boys and half the younger middle school team. And in between games, I had my laptop out–that not-so-insignificant issue that I need to fix the ending of CARNAL SIN.

And tonight Dan had a meeting and I had to do double-duty on practice drop-off and pick-up, so didn’t sit back down at the computer until 10 pm.

So you can see that thinking what I should write about is hard. As I often do when I get stuck, I look at my bookshelves. Sound weird? Well sometimes just staring at the books filling my shelves I can come up with an idea.

It didn’t work this time. So I looked at my desk. I have one stack of my Rita books–seven books, but I’ve already read two so I’m happy. Then another stack–with included a copy of ORIGINAL SIN (because I always pre-order a copy from both Amazon and BN.com–I’ve done it with every release and I think I’m a bit superstitious because I fear if I DON’T pre-order it’ll jinx it. I know, I know–dumb. But there you go.) 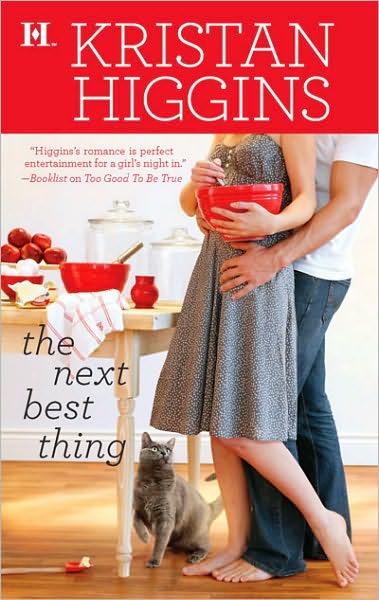 The book on top of ORIGINAL SIN is THE NEXT BEST THING by Kristan Higgins. I discovered Kristan when she entered the RITAs and I judged her book (I know, we’re not supposed to say anything, but this was two or three years ago and she won.) I loved it. (I can’t remember the title–was it CATCH OF THE DAY? It had the dog in the picnic basket on the cover, but my mom stole the book so I don’t have it on my shelf.) It is exactly the opposite of what I write. She writes warm, funny, heartwarming books that I adore. And THIS one has a cat instead of a dog (Go Felines!) So I always buy Kristan’s books ostensibly for my mom, but then I get another copy because my mom wants to keep the copy she “borrows” from me. (And yes, before anyone asks, I’m bringing my mom to RWA this year, okay? I think people are more interested in talking to her than me!)

So I stared at Kristan’s book for awhile (admired the cat–it looks like a Russian Blue persian on the cover, which reminds me of my old cat named Raider–yes, after the football team–though white and orange cats are my absolutely favorite.) Her book is about second chances, family, lost loves . . . second chances? I stared, hoping for blog inspiration, worried about my opening week sales (knowing you don’t get a second chance for opening week), frustrated that my revisions are taking longer than I thought (if only I could stop tweaking and ONLY address my editor’s concerns–but no, I have to touch every damn page); and stressed about the new release date for MORTAL SIN (8.31.10) because I don’t know how it starts. (Well, I was stressed more yesterday, because I didn’t know how it started or what happens in the book, but this morning driving to Starbucks I had a flash of the opening scene, so I think I’m okay now.)

And I thought, what would be the next best career after writing books for a living? I can’t imagine doing anything else. With all the warts and stresses and worries, I love what I do.

In fact, I’ve always wanted to be a writer. I thought I should be an English teacher first (but I dropped out of college) and then I thought maybe a reporter. There was also a time, for about two years, where I wanted to be a Forensic Pathologist–like Quincy, MD. That was until I dissected a fetal pig in biology in 8th grade and went back to wanting to be a teacher/reporter on the way to author. (As an aside, I did observe an autopsy and didn’t almost faint–cough cough Brenda Novak cough cough–so maybe I could have been a forensic pathologist. We’ll just never know now, will we?)

So honestly? The next best thing to being a writer . . . is writing about other careers. I have the best of both worlds (hey, Kristan! That sounds like a good title for one of your books–THE BEST OF BOTH WORLDS. Ha.) Seriously, though. I get to talk to cops, FBI agents, forensic pathologists, lab techs, coroners, doctors (with a special SHOUT OUT to CJ Lyons who has always answered my questions with aplomb. (I’ve never used that word in a sentence–“aplomb”–meaning with “ease” “self-confidence” and “style.”) I learn about the job, go deep in my characters so I can find out what they think of their job, and for a few months, I become a cop . . . or a criminal psychologist . . . or a demon hunter. And that is the next best thing . . .

Now it’s time for some of that Blatant Self Promo. I can’t help it. It’s release week. ORIGINAL SIN is on sale . . . and I have had some amazing reviews I’m tickled about (because as you all know, especially Toni and Rocki and Karin who have seen the worst of neurotic me, I’ve been a teeny-tiny worried about changing genres.)

“Brennan’s first paranormal outing is a winner. I love the detail that has gone into this book and can’t wait to learn more as the series develops.”

A terrific mixture of suspense, mystery and a lot of action with a hint of romance . . . I found myself repeatedly surprised by the turns in the plot. I have definitely been pulled into the world of the Seven Deadly Sins and I cannot wait until Carnal Sin releases later this year.

From Casee at Book Binge:

Original Sin is the start to what promises to be an amazing paranormal series. . . . I’m pretty sure that Moira will be on my list of top five heroines of 2010. She’s that good.

And here’s part of a review that is supposed to appear in the Providence Journal soon . . . cross your fingers that it makes it so I can use it, because I was floored when I got it.

“A scintillating new series… evokes memories of William Peter Blatty at his level best… Brennan shows a deft command of all things both normal and otherworldly in crafting one of the best tales of its kind since Dean Koontz and Stephen King were still writing about monsters. There’s no shortage of those here and the result is a new genre classic.”

I also want to thank my fabulous partners here at Murder She Writes for being so terrific and supportive, and how about our new bloggers? Amazing women, all of them.

What would be the next best thing for you? Or if you could have a second chance at something, anything . . . what would it be?