The Same, but Different

In January, I wrote a blog called SPEAR THE MONSTER where I cut open a vein or two and shared my struggle writing SILENCED. It was difficult on multiple levels.

But then I got these yesterday: 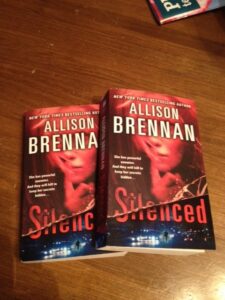 Even though SILENCED is my 18th novel, I was just as thrilled as when I held the first copy of my debut novel. Maybe even more excited, and relieved, because this book was so hard for me. Holding the book I stressed over was cathartic. SILENCED received a top pick from RT Book Reviews, another validation that the sweat and tears poured out while writing this book was worth it.

No book is “easy” but some are easier to write than others. STALKED, which I’m writing now, isn’t “easy” but I’m not having the same struggles. Maybe because the story is very ; maybe because I’m writing it predominately from one POV (Lucy’s); maybe because it’s structured like a mystery, not a thriller. My biggest dilemma is whether to include the killer’s POV. I still haven’t decided, because I’m enjoying the investigation. Out of 18 books, only one doesn’t have the killer’s POV. (KISS ME, KILL ME.) In the current incomplete draft of STALKED, I have one scene–the prologue–written from the killer’s POV. If my editor likes it, I’ll keep it because I love prologues and this one really works for me. But it may be the only such scene.

I love writing the villain’s POV. I have a workshop called “The Villain’s Journey” based on Christopher Vogler’s statement that “The villain is the hero of his own journey.” To me, following the villain adds depth and dimension to a thriller.

The villain must be deeply motivated to achieve believable goals, whether it’s drug running, sex trafficking, or strangling blondes. Why does he do what he does? What drives him? It may not make sense to you or me, but it needs to make sense to him, and as the author, I need to portray his personality and values so that you, the reader, believe that he’s real. Hating blondes is not enough of a motivation–why does he hate blondes? What turned the emotion into action? What is his conflict? Does he doubt his decisions? If not, what does he fear? What does he really want?

There are several villains in SILENCED, but only one head I got into. You meet him in chapter one.

One of my dilemmas as a writer is telling stories that make my core readership happy, but also are different. I want to stretch and grow as a writer, but sometimes the idea of doing something too different terrifies me as much as it excites me. I’m sure you have a favorite writer who went into areas you just didn’t want to follow. At the same time, you probably have a favorite writer who could write anything and you’d be happy.

I try not to think about any of this stuff when I’m writing, but sometimes I can’t help it. (Refer back to the Spear the Monster blog linked above.) Even though intellectually I know that I can finish a book, revise it, and have it be acceptable, I also fear that I’m not going to achieve what I intend, that I’m not growing as a writer and as a storyteller.

I think one reason I’m inclined not to write the killer’s POV in STALKED is because I want to do something a bit different. Since only one of my 18 books didn’t get into the head of the killer, it is a change for me, and one I’ve been going back and forth on as I write. Maybe that’s why the story is mostly in Lucy Kincaid’s POV. For me this is another big change–I love writing in multiple POVs. I don’t think I’ve written a book with fewer than seven. And while by the end of STALKED I may have seven POVs (there are only four now), 80% is Lucy.

On the flipside, STOLEN, my Spring 2013 book, is Sean Rogan’s book. I have always been more comfortable writing my heroines, but since I know the premise of STOLEN, I know it’s going to be Sean’s book and mostly in his POV. I’m really going out on a limb. The same series, but different. Scary, but exciting!

If I don’t challenge myself as a writer, I’ll be bored and my stories will be lifeless. Challenge is a good thing. But that doesn’t make it easy.

What’s something you’ve pushed yourself on that ended up having a positive impact in your life? Writing, reading goals, exercise, healthy choices, athletics, work, love?

One commenter will win an early copy of SILENCED, or if you prefer an e-copy, a digital copy will be gifted to you on release day in the format of your choice.