In two weeks NOTORIOUS will be available. March 25 is the big day.

I am very excited and nervous and scared. Most of you who read my blog know about my history. I have 21 mass market originals, numerous short stories and novellas, and 2 original indie novellas. But NOTORIOUS is my first hardcover.

Everything has been different.

Maybe I shouldn’t say the writing was different, because I still wrote every day, putting one word after another, until I was done. The difference is that I knew NOTORIOUS was going to be published in hardcover … and I didn’t know if I could make this book bigger and better than all that came before. Asking my readers to spend more for a physical book and a digital book meant, to me, that I had to put much more into the writing — a richer story, complex characters, a tight plot. 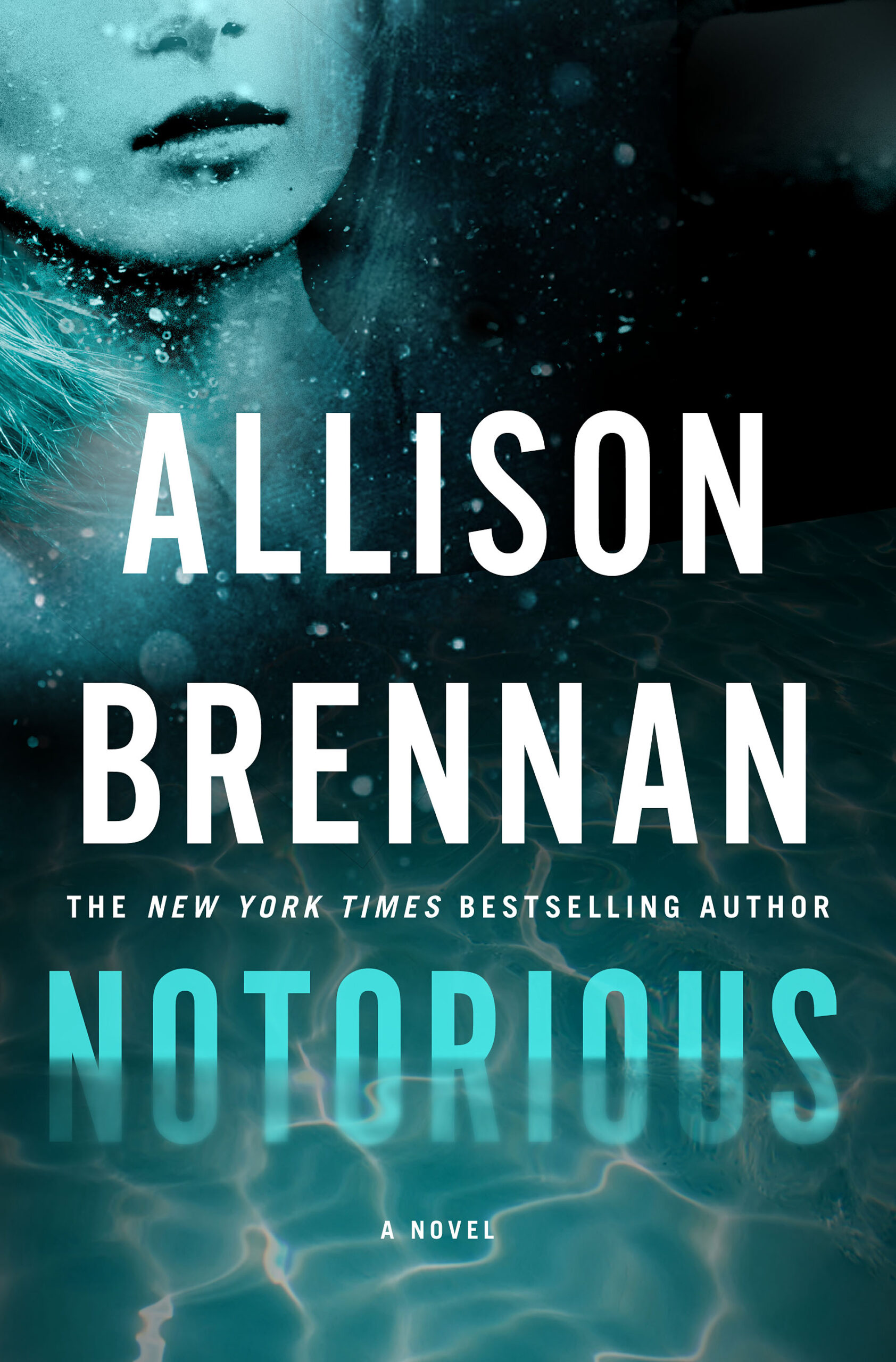 Whenever a writer puts intangible expectations on their work, they fail. I saw this because I put everything into my Lucy books. I’m always striving for a better story, growing characters, tight plotting, stronger writing. NOTORIOUS is no exception. I had to put aside the fear that I was incapable of writing a hardcover — especially since I don’t really understand what makes a hardcover different than the mass market originals I’ve been writing for eight years. I let Max tell the story, and I fell in love with her. NOTORIOUS is a character-driven mystery, and Max Revere is definitely in the driver’s seat.

There are a lot of scenes I could use to illustrate Max’s character, but when I was glancing through the ARC to remember a name I needed again, I came across this scene, which is one of my favorites. William is Max’s cousin, and Andy is Max’s high school sweetheart and William’s best friend. Nick Santini is the detective investigating a murder that Max is interested in (not Lindy’s cold case, but a more recent crime.)

Max almost thought Nick Santini wouldn’t show. It was Sunday afternoon, she was a reporter, he was a cop. David had called one of his buddies in the Marines and learned that Nick was a decorated veteran who’d served in both Iraq and Afghanistan as part of a special forces unit. He was still in the Reserves, like David. David was Army, but as far as Max was concerned, military was military.

Max sat in her favorite booth in the bar. Her phone vibrated again with another call from William. He’d left a message for her last night, which she’d ignored, and called again already this morning, which she also ignored. Maybe now he understood that she was serious about that parking ticket.

She answered the phone.

“I thought you were going to send me to voice mail again,” William said.

“What do you want? We said everything that needed to be said last night—unless you were lying.”

“I was calling to warn you—Andy knows about what happened at the Ames house last night.”

“Why does Andy care?” But he had come to see her Friday night, and their conversation hadn’t been all that friendly.

“I told him you weren’t looking into Lindy’s death, and now you’re making me a liar.”

“You brought me into it last night!”

“Me? You’re the one who had the secret parking ticket and didn’t tell anyone. All I did was call you on it. So I repeat, why are you now a liar?”

“Andy asked me point blank what you were doing at the Ames house last night. I played dumb, like I didn’t know what he was talking about.”

“You’d be wrong.” Max shifted uncomfortably. She hadn’t told David about the call to her hotel yet, and he wouldn’t like that she’d kept the information from him, especially after their heart-to-heart this morning. And she didn’t know if she’d honestly forgotten to mention it, or if subconsciously she knew David would have canceled his vacation with Emma if he knew there had been a threat, however subtle it was.

Max might have told William about the threat, except that she saw Andy walking briskly toward her. He looked as happy as Brooks and her grandmother had last night.

“Your best friend is paying me a visit. Is that why you really called? To warn me that Andy was on his way?”

“Good-bye.” Max hung up on William. Andy leaned over, his palms flat against the table.

“What the hell are you doing harassing Kimberly Ames?”

“Hello, Andy,” Max said. “I’d invite you to sit down but I’m expecting someone.”

Andy sat and Max’s temper went up a dozen degrees. “I told you to leave Lindy’s murder alone.”

“I don’t take orders from you.”

“You don’t take orders from anyone. You never did. I came to you as a friend the other night–”

“I’m not going to repeat myself.”

“What did you say to William that got him all upset?”

“Why don’t you ask William? He’s your best friend.”

“I did, and he talked around it, but he can’t lie to save his soul, and the more I pushed the more upset he became.”

Max stared at Andy. “Why do you care so much?”

“How do you know I was at the Ames’ house last night?”

“Everyone knows!” He slammed his fist on the table, causing water to slosh from her glass.

Max noticed that Nick Santini was approaching. His eyes weren’t on her; they were fixated on Andy, as hard as his expression.

Andy had been so engrossed in trying to intimidate her that he didn’t notice Nick until he was standing right next to the table. His manners battled with his anger. Manners won, barely.

“I’m sorry if I interrupted your meal,” he said through clenched teeth.

Andy stood, turned back to her and said, “We used to be friends. If that means anything to you, you’ll just stop this nonsense and go back to New York.”

“I think you know me well enough to know that I like running with scissors.”

For some reason, that infuriated Andy. “Be careful which way you point the scissors.”

Nick said, “Is that a threat?”

“Back off,” Andy said. “This doesn’t concern you.”

Nick showed his badge. “Everything concerns me.”

Andy wasn’t fazed by Nick’s shield. He smirked, glanced at Max, then said to Nick, “Watch out. She bites.”

In addition to my own doubts and fears, the process is very different. I had to write the book a full year before publication date. The reason is to help generate early reviews and interest. Minotaur has done an amazing job getting ARCs out and helping create interest in this new series. We published a digital prequel (Maximum Exposure), they sent out many ARCs to bookstores and e-galleys, they did a giveaway through GoodReads, and another through Shelf Awareness. I was blessed with fantastic pre-pub endorsements from some of my favorite authors, and they really went all out with an amazing cover that is to-die-for.

But I wrote the book a year ago! I had copy edits in May and page proofs in July and now it’s March … and as I’m writing the second Max Revere book, I find that I have to look back into the first book to make sure I have my details straight.

For example, I was interviewed by the Sacramento Bee and the reviewer, who’d read an ARC, said she couldn’t wait to learn more about Max, and asked me why she was terrified of ants. I didn’t remember that scene in the book. So I went back to the ARC and skimmed until I found the scene where Max is crawling in the dirt looking for something and her hand brushes over an ant hill.

Max squatted to check out a mound of dirt; it was an anthill. She moved quickly away from it.

“Not particularly, but I’m not squeamish, if that’s what you’re getting at.” Not generally squeamish. However, there were a few situations over the years she’d found herself in that she hoped were never repeated.

That the interviewer remembered that and I only vaguely knew of Max’s fear reminded me that it had been a long time since I wrote the book! And in Max #2 (no, we don’t have a title yet!) I realized it wasn’t ants that Max feared, but definitely something creepy and crawly. And that fear is going to return in a big way, and we’re going to learn why.

I realized early on that this series is about Max. She’s driving it. She’s the key character. She’s strong, independent, smart, stubborn, and driven. She’s flawed but she recognizes her flaws. She’s obsessive and knows it. Readers will love her or hate her. I think I sensed that when I was writing her story, but I didn’t want to hedge her character. I didn’t want to soften her just because someone might not like her. She has good traits and bad traits … but like most of us, sometimes our good traits get us in trouble, and sometimes our bad traits save our butt. Max is who she is, and I couldn’t have written her any other way.

I just hope you all like Max as much as I do.

From Sandra Brown: “Brennan’s NOTORIOUS introduces readers to a new and fascinating heroine worth rooting for. She’s an investigative reporter who’s not afraid to kick butt, climb a tree, or go to jail in pursuit of her story. She’s savvy and smart and takes no prisoners. Buckle up and brace yourself for Maxine Revere.”

I have one final ARC to give away. My publisher sent me 20, but I gave most out to the Sacramento Library Foundation, to my high school when I spoke, local reporters, and others. Plus the one I’m going to keep forever! But I saved one for Murder She Writes … just leave a comment below. I’ll let you all know on Thursday who won it so you can read it before the book comes out 🙂 And I’ll be at a few bookstores the week after it comes out — they are also happy to take pre-orders and ship signed copies if you can’t make it! The list is on my website.