Last week, I turned in the revisions of IF I SHOULD DIE, minus the ending. The last sixty pages just weren’t working. I’d attempted to write the ending a multitude of times, but as I got into it, something stopped me.

The set-up was contrived. The characters were being stupid. I forgot a character over here. I killed the wrong guy.

Nothing was coming together the way I thought it would.

I suppose I should have realized this book would be the hardest book yet. More than five years ago, my first book was published and I thought that surely, writing would be easier.

After my seventh book nearly killed me, I thought surely, it will get easier.

I remember chatting with my mentor and friend Mariah Stewart, lamenting the fact that (at the time) she had twenty-some books published and it was “so easy” for her. She laughed at me and said, “Honey, it doesn’t get easier.” In fact, she continued, it gets harder, because you’re always striving to write a better book. Writing a book equal to the last is, in fact, slipping, because readers will continue to expect more.

That’s not necessarily a bad thing—but it does add pressure.

The writing itself isn’t the problem. I think I’m a stronger writer—my manuscripts are cleaner, I don’t make some of the amateur mistakes I used to. But it takes me longer to write each book. I can no longer write beginning to end without pause. I see the mistakes right after I make them; I stop, backtrack, rewrite, repeat as necessary. And even then, when I’m done, I rewrite the entire book.

IF I SHOULD DIE is a very linear story. While there were lots of things going on, there was a definitely catalyst, and everything came from that. But as secrets of the small town of Spruce Lake, NY were revealed, I found the story was far more complex than I thought. And because of that, the ending was difficult to write. I had to tie up a lot of loose ends, make sure the climax was both exciting and realistic, and that the motivations of the characters held up to the end. Meaning, their actions and reactions had to be consistent based on who they were. The villain in particular.

Each ending I began (but didn’t finish) was headed toward a conclusion that didn’t make sense—to me OR to my characters. So I’d back-track and rework and start in a different direction. A character would die, then I’d realize they couldn’t die! Or it didn’t make sense, and then they’d be resurrected for the next go-around. A different person would die. Or live. Or be severely injured. Or kidnapped. But none of it was working and I was desperate. I’m just not cut out to play God with my characters. I’m just the voice, telling their story.

I finally gave up control and let my sub-conscious figure it out: I went to bed thinking about the book and where and why I was stuck. And I woke up with the solution.

This kind of problem solving has worked for me in the past, both in my writing career and in my previous career, but I hesitate to rely on it. Maybe I fear that if I count on dream solutions I will become lazy and complacent and not think things through. Whatever the reason, it usually works when I’m completely stuck and see no way out.

What amazed me this time was the solution was there all along, I was just too stubborn to see it. In fact, I’d rejected the solution long ago because I thought getting all the characters in one place was contrived. But on the contrary, it was the only possible outcome for the set-up. It made sense.

At least, I hope it does … I’m waiting to hear back from my editor who hasn’t read the ending yet to let me know if it all works. :/

Here’s the back cover copy from IF I SHOULD DIE, book three of the Lucy Kincaid series, which will be out 11.22.11

A TRIP TO THE DARK SIDE 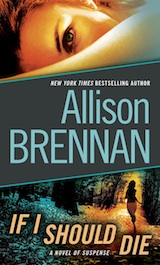 Aspiring FBI agent Lucy Kincaid and her P.I. boyfriend, Sean Rogan, are headed to the Adirondack Mountains for a pleasant romantic getaway, when they detour to help out troubled friends, owners of a new resort who are battling malicious vandals. After Lucy and Sean pursue an arsonist into an abandoned mine shaft, Lucy stumbles upon an even more heinous crime—and the perfectly posed remains of its victim.

The only thing more disturbing than the woman’s corpse is its sudden disappearance. While the local police remain skeptical, Lucy is dead certain there’s a connection between the sabotage and the murder—one that the less-than-neighborly citizens of Spruce Lake seem to have a stake in keeping hidden. When a cold-blooded sniper targets Sean and Lucy, FBI agent Noah Armstrong enters the fray to ensure more bodies don’t hit the ground. Now three outsiders race to untangle a violent conspiracy before they end up like the rest of Spruce Lake’s secrets: dead and buried.

And I’m thrilled to announce that I have a title for Lucy Kincaid #4, which will be out next May: SILENCED.

My question today: what an assumption you’ve had about your writing, your kids, your life that has changed? For me, I thought writing would get easier the more books I’d written; that is so, so, SO far from the truth. What about you?