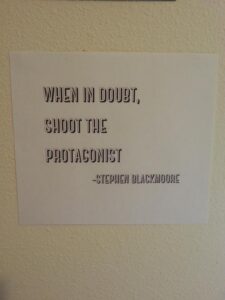 Perhaps a bit tongue-in-cheek, but it got me thinking. Maybe thinking a bit too much, leading to a bout of procrastination where I started writing this blog.

There is infinite truth in this statement because the core of every story is really two journeys: the protagonist’s journey and the villain’s journey. Where these journeys intersect, there you have the story.

As a writer, my job is to create characters that readers care about. The tension in the story comes from readers being invested in the character’s story — in their journey. We want the hero to achieve his goal. We want the bad guy to be defeated. We worry about what might happen as the protagonist acts and reacts to events. We care.

When the reader cares what happens to the hero, the writer is halfway to delivering a great story. Now, the writer needs to raise the stakes by challenging the hero, by creating organic roadblocks that prevent the hero from achieving his goal. If it’s too easy, the reader isn’t going to think kindly on the hero. If anyone can do it, there’s no hero in the story.

So, shoot the hero.

Yes, this can be literally wound him. In a fight, the hero shouldn’t be the biggest, baddest, strongest guy there. If he is … you have to “shoot” him emotionally.

Remember DIE HARD? Bruce Willis hates flying. When he arrives at his wife’s office building, he takes off his shoes in the bathroom to calm down and be more connected to the earth (on the advice of a fellow passenger.) Problem? The bad guys come in, start shooting, and Willis has to run … sans shoes. Already, he is at a disadvantage because his feet get cut up from broken glass. He’s wounded. Maybe not shot (yet) but already the viewers are thinking, “Shit, how is he going to get his shoes back? How is he going to get out of this?” And he never gets his shoes back … 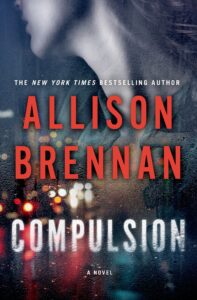 I thought about this philosophy when I was writing COMPULSION, the upcoming Max Revere book. Max is a very smart, savvy, in control character. She’s not a cop, she might take risks, but doesn’t per se put herself in risky situations. She’s not reckless, but she’s also willing to push the boundaries. In the first book, she was challenged more through her interactions with people, and the internal conflicts and internal emotions were actually under control. In COMPULSION, I “shot” the hero. Not literally — but I needed Max to truly explore her own psyche, to come to terms with the inner conflicts only touched upon in the first book. And yeah — I challenged her. I took away from her the one thing she has to have: control. I might as well have shot her.

There are many great examples of shooting the protagonist:

In PERSON OF INTEREST when Joss is shot and killed — a pivotal turning point for our anti-hero, John.

In ARROW when Oliver Queen is shot and nearly killed by his mother when he confronts her as the hood … and sets up a turning point in Season One, plus reveals pivotal backstory from the island.

In THE BLACKLIST when Donald Ressler is shot in the leg and would have died if Red hadn’t saved his life. It was a turning point for Donald (one of our heroes) in how he viewed the last five years of his life (and this continues through the rest of the season) and for Red.

In CASTLE, when Kate finds out Castle lied to her about his involvement in investigating her mother’s murder — the writers “shot” Kate (Castle’s betrayal) and led her down a darker path.

In THE EMPIRE STRIKES BACK, Luke Skywalker loses his hand.

In my book FEAR NO EVIL, the bad guy stabbed the hero, Dillon Kincaid, in the hand in order to force Lucy into coming to him with the implied threat that the next wound would kill her brother.

While everyone thinks of these turning points as black moments or steps on the hero’s journey, I much prefer Stephen Blackmoore’s simple quote:

When in doubt, shoot the protagonist.

Are you stuck? It’s Writer Wednesday! I’m open for questions … and I may have answers. Or just talk about your favorite moments of shooting the protagonist.