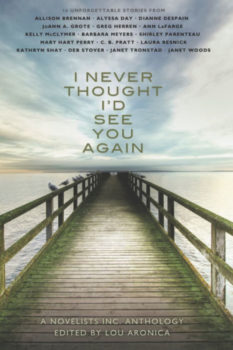 What comes to your mind when you see that phrase? A reunion with a former lover? A shocking encounter with a dark face from your past? A dearly held memory come to life . . . or one you’ve tried desperately to purge from your mind?

In this extraordinary collection of original fiction, sixteen great storytellers spin the tales that filled their imaginations when considering that sentence:

Romance, suspense, and magic, secrets unearthed, mysteries revealed, and promises finally kept — all of this and much, much more comes to you in this unforgettable anthology that is every bit as evocative as the title that served as its inspiration.

Angel Saldana knew she was in danger the minute the assistant warden told her two detectives had arrived to escort her to a group home.

She was sitting in the waiting room, reading a paperback thriller she’d stolen from the back of the squad car that had brought her to juvie this morning. It’d been on the floor, no place for a book, and she didn’t figure the cop would notice. The book was about some guy named Reacher who was just walking down the highway, minding his own business, when he got arrested for a crime he didn’t commit. The cops didn’t know anything until the Reacher guy set them straight, and they still sent him to prison for the weekend. He’d practically solved their entire case, and they just ran around like idiots. Angel could so relate. Here she was sitting in juvie against her will all because she was trying to do the right thing.

“Angel, the officers are here to take you to the home,” the assistant warden, Lambert, said.

Not her home, but the home. A group home. She’d been stuck in one before; they were almost worse than juvie.

Safer? Hardly. But at least outside the building she’d have a chance of survival.

But if she ran, her deal was off. Wasn’t that what they called a Catch-22? Dead if she runs, dead if she doesn’t.

Angel had agreed to testify against Raul Garcia, the head of the G-5 gang, because she didn’t really have a choice—wrong place, wrong time, all trying to help a friend stay out of trouble. The minute Angel found out that Marisa was dating Raul’s brother George, she’d warned her to stay far away. But Marisa hadn’t listened to Angel when they were five, why’d Angel think she’d listen to her now that they were fifteen?

Angel was more worried that something had happened to Marisa. She hoped she was just in hiding, that she’d simply chickened out of testifying against the Garcia’s. But Angel hadn’t seen or heard from her in three days.

Assistant District Attorney Kristina Larson assured Angel that she wasn’t in any trouble, as long as she told the truth Monday morning. Telling the truth wasn’t going to be the problem. Staying alive the next thirty-six hours? The jury was out on that one. Angel had asked Larson about Marisa; she said the cops were still looking for her.

Lambert continued. “I hope you can stay out of trouble this time, Angel. You’re a smart kid. Too smart for this shit you get yourself into.”

Trouble was relative. Lambert only knew Angel by her record and the two stints she’d already done in juvie. Being picked up for vandalism for keying the Bastard’s car after he pinched her on the ass for the hundredth time. For truancy when she didn’t go to school protesting that the Bastard was still teaching even after Angel told the assistant principal he had grabby hands. (His name was Mr. Bernardo, but Angel preferred the Bastard. Call a spade a spade, right?) And then the time she got arrested for joyriding past curfew without a license. (Where’s the joy in picking up her drunk mother at a bar?)

The trouble Angel was most concerned about was the kind that hurt. Or, considering that the Garcia family was involved, the trouble that killed.

“You’re not under arrest,” Lambert said. “This is for your protection.”

“I know.” She almost wanted to take her chances here in juvie.

Don’t be a dumbass—there’s no way out of here.

What she really wanted was to go home, but no way they’d let her do that when her mom was in rehab (again) and everyone who was anyone (anyone bad) seemed to know she was going to testify against Raul Garcia. Angel had asked Kristina the lawyer if she could go home with her for the weekend, and the ADA seemed so flustered and surprised that Angel had backed down. Angel realized the woman was nice because she needed something; when all was said in done, Kristina Larson was a ladder-climbing lawyer, and she was still Angel Saldana, a half-Hispanic, half-whatever, juvenile delinquent who just happened to get good grades and ace standardized tests.

Some genius you are, Angel. You certainly don’t know how to pick your friends.

Lambert handed Angel her backpack that had been confiscated when she arrived this morning. She stuffed the stolen paperback into the front pocket. An older plainclothes detective stood in the doorway. He looked her up and down, surprised. “This is Saldana?” He frowned at a folder in his hand.

“It’s the hair,” Angel said with a fake smile. “I got bored of brown.”

She’d bleached the underside of her hair, then dyed it fire engine red. Added a couple blonde highlights on top and became a different person. At the time it seemed like a good idea, but unfortunately, the radical color made her stand out. First chance she got, she’d do something less dramatic to blend into a crowd.

The cop raised an eyebrow but didn’t say anything. Maybe it wasn’t just the hair. The nose stud might have done it. Or the two Chinese characters tattooed on the back of her neck that meant strength. She certainly wasn’t out to impress this cop or anyone else.

Lambert signed the paperwork and the cop escorted Angel out of the building. It was already dark, not surprising because it was January. She’d bolted her apartment so fast after Marisa disappeared and the creeps showed up that she hadn’t grabbed a jacket. Everyone thought L.A. was all sun, all the time, but January and February got damn cold when the sun went down. There might even be rain this weekend. Terrific. At least the weather suited her mood.

The cop said, “I’m Detective Jim Friday.” He nodded to the other plainclothes cop leaning against the hood of the sedan. “That’s Detective Martinez.”

“Hola.” She gave Martinez a partial salute. “Can I convince you guys to swing by In and Out? I’m starving.” Juvie food was a step up from garbage, but she’d been so nervous that she hadn’t eaten.

“Jim Friday.” Angel smirked. They didn’t have cable in her apartment and she’d spent one summer watching re-runs of sixties television shows. Anything was better than the soap operas her mother devoured like the wine she drank. Mister Ed, Bonanza, Adam-12. Dragnet made her laugh, though she didn’t think it was supposed to be funny. “Anyone call you Joe?”

Martinez laughed spontaneously and Friday scowled. She grinned as she climbed into the backseat. The two cops sat up front.

“Don’t start,” Friday muttered to Martinez as his partner turned the ignition.

As soon as the car left the juvie compound, Angel breathed easier. She wasn’t out of the woods yet, but she was no longer locked up. Angel knew the San Fernando Valley inside and out and was confident she could find someplace to hide if the group home situation was messed up.

“Where are we going?”

“My apartment is in Reseda—think we could swing by and get some of my stuff?”

“No.” Martinez glanced at her in the rearview mirror. “Don’t you think it’s unusual that you have a police escort? We don’t usually go about transporting juvenile delinquents from lock-up. It’s either corrections or social services.”

Martinez snorted. “I saw your file.”

She stuck her tongue out at him in the mirror and leaned back.

Friday said, “The DA’s office is taking all precautions, considering.”

“Considering I have a target on my back.”

“If there was a real threat, they’d put you in a safe house. This is simply a precaution.”

“Whatev.” Of course there was a real threat. Angel had always steered clear of the gang and drug scene, though it wasn’t easy. Between her apartment and school, by the time she was running through multiplication tables Angel knew every street name for meth, coke, pot, heroin, and anything else grown, cooked, or manufactured to get someone high. When Marisa started dating Raul’s brother George, she’d brought the drug gangs to their doorstep. Angel should have told her to take a hike, but loyalty—best friends forever—won. Marisa and her parents were the only stable people in Angel’s life. They lived in the same apartment building for as long as she could remember. Marisa’s parents taught her Spanish and fed her when her mom didn’t buy food—which was often.

“Why’d you do it, Marisa?” Angel mumbled.

“What?” Friday said from the passenger seat.

Because it was Saturday evening and traffic was moving, it didn’t take long to cross the Valley. The group home off Vanowen looked like every other ranch house built in the fifties. The front was mostly concrete with a small square of lawn, a three-foot high chain link fence that might keep a Chihuahua caged and not much else. A white van in the driveway had Los Angeles County Group Facilities Management painted on the side.

I so do not want to be here.

“These people know I’m not in trouble, right?”

“They know you’re a material witness and we’ll be picking you up at seven-thirty Monday morning to escort you to the courthouse.”

“My own chauffeur service,” Angel said.

Martinez turned off the car and stared at her. “Your mouth gets you in trouble, doesn’t it chica?”

“Don’t cause problems,” he said.

She gave him her most angelic smile. “Who me?”

Friday got out, opened her door and said, “Watch your step.”

She got out and then hesitated. Just a moment.

Angel had survived fifteen-and-a-half years because she had sharp instincts honed in the womb. Every synapse told her to duck. She didn’t know if it was the van, if she saw it move, or if it was a sound, but something was wrong and Angel trusted her gut.

As if Friday could read the expression on her face, or maybe she’d said his name, or perhaps his own cop instincts had kicked in just a moment too late, he turned, his hand on the butt of his gun.

The van’s side door slid open and Angel flattened her body on the ground as soon as she saw the glint of a weapon under the streetlights.

She rolled under the cop car the second before gunfire started. Semi-automatic weapons, the kind that weren’t legal and probably never had been, broke the silence with a roar. She slid to the other side of the car, the underbelly scratching her leg, the rough asphalt scraping her arms and stomach. When she was clear, she half crawled, half ran across the street.

She heard shouts and screams behind her, and one of them yelled in Spanish, “She’s across the street!”

Then she heard, “Bitch! Get back here, punta!”

Like she was going to stop for him or anyone else who was shooting at her.