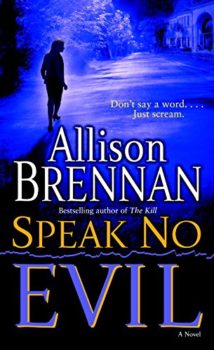 The murder of eighteen-year-old Angie Vance was exceptionally vile—her mouth was sealed with glue, an obscenity was scrawled across her skin and she was suffocated in a garbage bag. The killing seems personal, so police detective Carina Kincaid focuses her efforts on the victim’s much older ex-boyfriend, Steve Thomas. But without physical evidence, Carina can’t make a collar or a case. She also can’t stop Sheriff Nick Thomas, the prime suspect’s brother, from conducting his own unwelcome investigation.

Though Nick is still scarred and unsteady from a recent confrontation with a serial killer, he’s determined to prove his brother’s innocence. But his confidence is shaken when he learns of Steve’s dark side, and when a friend of the murdered girl meets a similarly gruesome fate. With no time to lose, Carina and Nick work together to trap a psychopath, before another unlucky woman faces an unspeakable end.

Praise for Speak No Evil

“SPEAK NO EVIL is an edge-of-your-seat, wild, twisty, chilling read.”

“Rising star Brennan furthers her momentum with the launch of what promises to be another sensational trilogy. At the core of this novel is the age-old question of whether you really know the people around you. Everyone has secrets and, as this book demonstrates, some can kill. Brennan’s arrival on the suspense scene has been a tremendous gift.”

“SPEAK NO EVIL is a tautly written thriller that grabs the reader from page one and holds on with a fisted grip until the final page. Carina and Nick are a dynamic pair, each touched by a horrific crime in their past, each needing the other to make themselves whole. The terrifying glimpses into the killer’s mind are truly disturbing and the ending a surprise. This latest from Ms. Brennan will stay with the reader long after the final page is turned.”

Other Books in No Evil Trilogy Series