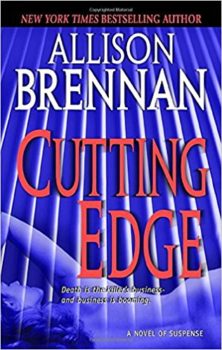 A RADICAL WAY TO DIE

When security specialist Duke Rogan’s state-of-the-art computer system fails at a controversial bio-tech firm, a raging inferno is ignited and a grotesquely charred body is discovered in the aftermath. With an extremist anti-technology group claiming responsibility, the case grows even more complex when the victim’s autopsy unexpectedly reveals that he bled to death. Heading the FBI’s domestic terrorism unit, Agent Nora English is fiercely determined to track and stop a sadistic assassin.

To ferret out the truth, Duke joins forces with the Feds, despite Nora’s objections. But neither can deny how well they work together as a team — or that the static between them has turned to sparks. As pressure builds, the case abruptly turns personal as a cunning killer targets Nora. She will have to trust her deepest instincts—and take the ultimate risk—for the people she loves and the justice she believes in.

“Both the nature and nurture sides of the “what makes a psychopath” argument are on display in Brennan’s chiller…Leave it to Brennan to deliver the creepy and deadly. This is definitely the stuff of nightmares.”