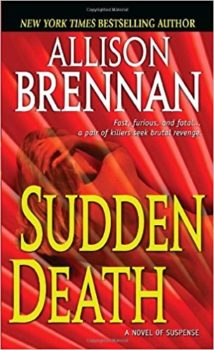 When a homeless veteran is found dead in a squalid Sacramento alley, FBI special agent Megan Elliott vows to find the murdered hero’s killer. Her investigation gets complicated fast, for the victim, a former Delta Force soldier, is just one link in a nationwide spree of torture and murder.

Straight off a job rescuing medical missionaries, soldier-for-hire Jack Kincaid returns to his home base in the Texas border town of Hidalgo only to receive the news that one of his closest colleagues–also ex-military–has been brutally murdered. Faced with an inept local police force, Jack takes matters into his own hands.

Now, as part of a national task force to stop the sadistic killings, by-the-book Megan and burn-the-book Jack form a tense alliance, sparked with conflict and temptation. But they struggle against more than passion, for a vicious pair of killers has only just begun a rampage of evil . . . and the primary target is much closer than Megan suspects.

“A first-rate book, superbly plotted and executed, with exceptional characters. A real page-turner with twists and turns all the way to the end. I could not put this book down. Highly recommended.”

“In SUDDEN DEATH, Ms. Brennan takes the ‘bad seed’ concept and runs with it…This edgy, compelling thriller is guaranteed to grab a reader’s attention quickly and will not let go.”

“The line between sanity and madness is indeed thin in Brennan’s latest psychological thriller. One reason why Brennan’s tales are so disturbing is her ability to create utterly chilling villains. With plenty of twists and turns, this perverted revenge tale is both unsettling and suspenseful. Brennan hits every note terrifyingly right!”