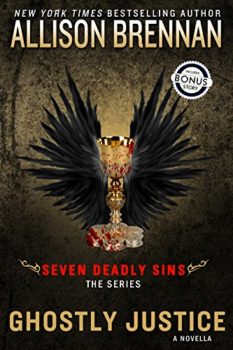 LAPD Detective Grant Nelson made a promise to his dying girlfriend that he would find out what happened to a Jane Doe who’s been in the morgue for months. Grant is a cop first, last and always — but what he’s recently witnessed makes him realize there are forces he doesn’t understand and can’t possibly fight alone.

The unusual aspects of the case force him to bring in supernatural experts Moira O’Donnell and Rafe Cooper. Two puncture marks in the victim’s neck confirm she’d been bitten by a human with incisor implants, but the large-bore needle mark in her side prove that someone intentionally drained her blood.

Moira doesn’t want to get involved because she doesn’t think the case is related to anything supernatural, but after Rafe communicates with the ghost, he insists that dark magic was involved in her murder. Reluctantly, Moira agrees to help and together, the three of them uncover a violent, vampiric subculture that has no intention of stopping with only one human sacrifice. Because with each death they become stronger, and the threat of hell on earth becomes all too real.