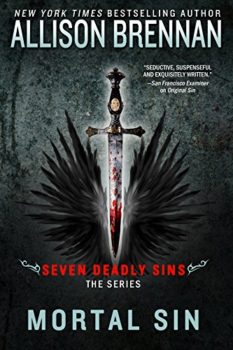 Four months ago, a black magic coven summoned the Seven Deadly Sins from hell then quickly lost control. Former witch Moira O’Donnell and her lover, ex-seminarian Rafe Cooper, captured two of the demons, but the remaining five Sins disappeared. Now, whoever gets near the demons becomes infected with an insidious urge to act out on their deadliest sin—with horrific results.

Moira will do anything to find and imprison the remaining demons. Unfortunately, there’s no rulebook to follow, only her gut instincts … and they’re telling her something is very wrong in Santa Louisa, the small California town where the demons were first released. Fights are breaking out day and night, friends are turning on friends, and the jails are full. She wants to stay and help Sheriff Skye McPherson find the cause of the violence, but when a demon hunter goes missing while pursuing one of the Seven, Moira’s the only one who can find him.

While Moira is tracking one demon in Canada, Rafe and Skye battle another in Santa Louisa. With every victory comes many more defeats, and Moira quickly realizes that someone—or something—doesn’t want her to return to Santa Louisa. The body count rises, demonic hot spots pop up throughout the world, and the people closest to Moira are in the most danger. When one of their own succumbs to one of the Sins, Moira fears they’re too late … and the end of the world is already here.