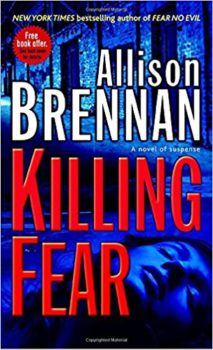 Theodore Glenn loves to inflict pain . . . both on his victims and on those who later find the mutilated corpses. At his trial seven years ago, Glenn vowed vengeance on Detective Will Hooper, the cop who nabbed him, and beautiful Robin McKenna, the stripper whose testimony put him behind bars.

When a catastrophic disaster sets Glenn free, he blazes a freshly bloodied path across San Diego County. But the death he craves most is Robin McKenna’s.

Putting aside their past troubled relationship, Will rushes to protect Robin, now a savvy businesswoman operating an upscale club. As the killings mount and Glenn proves a master manipulator, Robin and Will become snared in a twisted web of horror. But the shocking truth is even worse: The evil they are to face is even deadlier than they fear.

“Fast becoming a master at delivering complex, layered plots and characters that erupt from the page, Brennan has created a roller-coaster ride of chills!”

“A bone-chilling tale with a villain straight out of your worst nightmares…KILLING FEAR delivers to the heart-stopping end.”

“KILLING FEAR is a page turner. From front to back, this book is action packed. Brennan did a bang-up job of writing a sociopathic character. For you readers who like your mystery along with a steamy romance, this one is a great one for you.”

“KILLING FEAR is horrific, fascinating reading. The timing is flawless, the characters intriguing, and the suspense is air-tight…a terrific novel I highly recommend.”