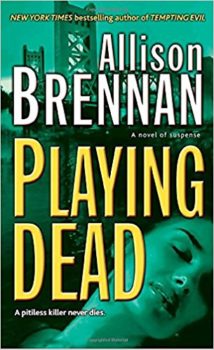 Sentenced to death for crimes he didn’t commit, ex-cop Tom O’Brien is now a hunted fugitive. After fifteen years in prison, he’s determined to prove his innocence–but first he must convince his daughter, whose testimony helped put him behind bars, that he has damning evidence of a plot to frame him.

Claire is no longer the naïve teenager who arrived home to find her mother and her mother’s lover shot dead and her father holding the murder weapon. She’s a successful fraud investigator who assumes everyone lies. Though Claire is convinced of her father’s guilt, curiosity propels her to look into the disappearance of a law student who claimed to have proof of Tom’s innocence. But seeking answers only leads to more questions, reinforcing Claire’s belief that there’s no one left to trust.

Obsessed with the O’Brien case, FBI agent Mitch Bianchi befriends Claire under false pretenses, certain that Tom is not only innocent but in grave danger–and not just from the cops. As the three race toward the truth, a murderous conspiracy tightens its noose–and Claire becomes the target of an ice-cold psychopath who will kill to protect his secrets.

“This tale is an outstanding suspense with several unexpected twists to keep readers guessing and on the edge of their seats…Very well done and I highly recommend it to people who enjoy romantic suspense or thrillers.”

“Thriller readers who have not discovered Ms. Brennan are missing out on a top gun.”

“The mystery is tightly plotted with the final reveal not happening until the very end of the book…PLAYING DEAD is an adrenaline rush of thrills and chills that is sure to win Brennan several new readers.”

“Crafty Brennan wraps up her Prison Break trilogy with the intricate tale of a nearly perfect frame-up…Brennan does an outstanding job keeping the players distinct and slowly revealing how the plot threads all intersect. It’s wonderfully complex and terrifying at the same time.”