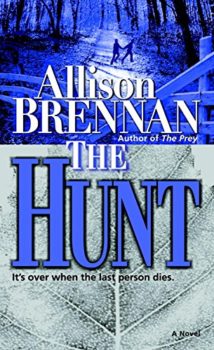 Touched by a killer, she feels the fire of revenge.

Twelve years ago, Miranda Moore miraculously survived the torture of a serial killer who was never caught. Since then, Miranda, a former FBI trainee and now a member of a local search-and-rescue squad, has witnessed with horror the recovery of the mutilated bodies of seven young women, all victims of her tormentor, known as The Butcher. When another beautiful Montana college student goes missing, the Feds get involved, and an agent, a man Miranda once trusted with her heart, arrives to take over the investigation—forcing her toward a painful choice.

Now, while Miranda battles her demons, while friends, lovers, and traitors are caught up in a frantic race against time, a killer hides in plain sight—waiting to finish the one hunt he has left undone.

Praise for The Hunt

“Brennan does murder better than almost everyone writing in the suspense genre.”

“The second chapter in rising star Brennan’s darkly dangerous trilogy is packed with emotional demons and past regrets. Showing her expertise with complicated characters, Brennan builds creations that are flawed but highly intriguing. Terrifying!”

“The beauty of the area, the scenery, all are rendered well with Brennan’s fine prose. The characters are solid, the plot hurtles forward, twisting and turning in true thriller fashion.”

“There is no denying the power behind this slick plot or its appeal.”

— Curled Up With A Good Book Reviews

“THE HUNT is an intense romantic thriller, filled with unpredictable twists and packed with emotion.”

“Ms. Brennan’s fluid style of writing, her remarkable talent for pacing suspense and her intriguing characters combine for a killer thriller. The dynamite romance in this story is just icing on the cake.”