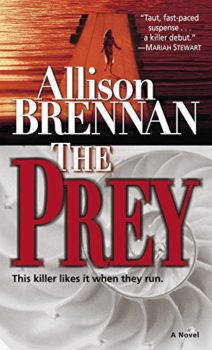 First, she imagined it. Then a killer made it real.

Rowan Smith is living in a borrowed Malibu beach house while her bestselling novel is made into a Hollywood movie. A former FBI agent with a haunted past, Rowan thinks she has outrun her demons. But fiction and reality collide when a dismembered body is found in Colorado: the real-life victim had the same name, occupation, and looks as a character in Rowan’s novel. By the time the FBI, the LAPD, and her own private bodyguard gather around her, another person is killed—the murder ripped from the pages of Rowan’s book.

In the company of a former Delta Force man with secrets of his own, now Rowan faces an excruciating dilemma: the only way to chase down the tormenting killer is by revisiting the darkness of her past—and by praying for some way out again. . . .

Praise for The Prey

“New arrival Brennan wastes no time proving that she’s a talent to be reckoned with…Truly chilling!”

“Simply put, THE PREY works on all levels. This debut author has woven a gripping tale where secrets from the past collide with secrets of the present, and love conquers the darkness, but not without one heck of a battle…an exhilarating fast-paced read, you’ll be tempted to stay up late and finish it in one sitting. THE PREY is a fine example of what a romantic suspense should be: sexy and spellbinding.”