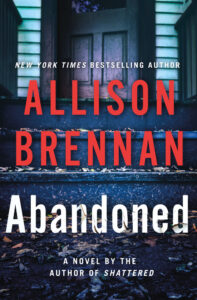 We’re not supposed to have favorites. Like, kids. I’m a mom and I’m not supposed to have a favorite kid. And I don’t. I might have a favorite kid on one day, and then another day it’s another kid. Maybe the kid who makes me coffee in the middle of the day because he notices I’m dragging, or the one who calls me just to say hello, or the one who plops down on my office couch and spontaneously tells me about his day without me having to drag it out of him … yeah, sometimes I have a favorite, but it’s short-lived, because I love them all.

Ditto with books. I love all my books — and hate them — equally. Such is the writer’s life. We have highs and lows. We usually love our book when we start it. It’s new, it’s exciting, it’s fresh.

Then we hate it. We get stuck, our characters don’t cooperate, we have no idea who the killer is or how to catch them or if they even should be caught because after all they killed a child rapist and shouldn’t all child rapists be dead?

Then we love it because we type THE END and it’s done. It’s now our favorite book of all time because it’s DONE. It’s OVER and we get to start something new!

Then a couple months pass and suddenly the page proofs are on our desk and we can sit down and give the book one final proofread. And that’s when it’s real. “Did I write this? This isn’t half-bad. It’s actually pretty good. In fact, I really like it. Except, why I use the word ‘retribution’ three times in one paragraph AND NOT CATCH IT THE FIRST HUNDRED TWENTY SIX TIMES I READ IT!”

Yes, this is the writer’s life.

Then we get to a book we want to find fault with … and don’t. Well, I’m sure there will be some reviewers who will hate ABANDONED and some who think I should go back to my day job, but with this book … I honestly don’t care. Because I love it. ABANDONED is the fifth book in the Maxine Revere series and I can honestly say that I think it’s the best. Not just because I’m a better writer than I was 5 years ago when I wrote NOTORIOUS. All of us who write for a living hope that we’re getting better book after book, that our writing is tighter, crisper, more emotional, more exciting. 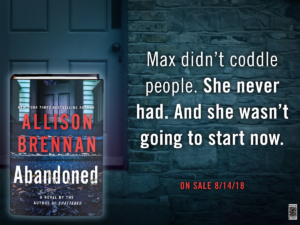 But I love this story. I love how Max has grown. She is still arrogant and confident and independent … but more. She has always been grounded and known who she was and what she wanted, but everything has shifted for her. I’ve shaken things up and Max has to deal — and watching how she adjusts to major life changes and unexpected truths … well, it was fun and exciting and I like her even more.

Some reviewers over the years have called Max a bitch. I find that there’s a double standard between professional men and women. Men who are dogged, confident, and intelligent are considered leaders and statesmen; women who exhibit the same traits are considered selfish shrews. They are called bitch, they are criticized for their appearance and their manner and their drive.

Maxine Revere was going to destroy his life if he couldn’t find a way to convince her to leave, that there was nothing here for her, no answers to her questions. 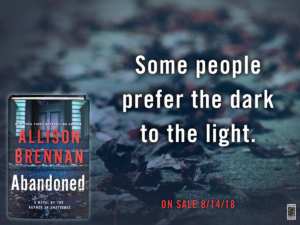 Max doesn’t care. She is going to do whatever she damn well pleases because she wants to. And she doesn’t give a second thought to anyone who criticizes her. For Max, she’s all about the truth.

The truth is messy, but it’s real. It’s tangible. It separates the weak from the strong.

In ABANDONED, I realized Max was finally at the point — after four books where she took baby steps into full maturity — where she was ready for the truth about her mother. The problem? I really didn’t know what had happened to Martha Revere. It was a plot point from book one … but it was backstory. It wasn’t real, as far as I was concerned — and I didn’t need to know. 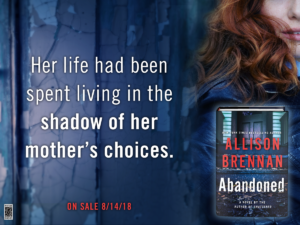 And the only way I could figure out what happened to Martha was to write chapters from her point of view, which mean that they happened in the past. Starting with leaving Max:

Any residual guilt Martha had over leaving her daughter disappeared at the Atherton town limits. After all, she deserved a life, too.

And as I wrote from Martha’s POV, everything came clear. Not only about Martha, but also about Max.

People might say Max has “grown up” over these five books. Maybe, in some ways — but Max has always been mature beyond her years. In ABANDONED, I think Max has finally accepted herself. Because even all the confidence and ego that Max has exhibited over the first four books in her series, she kept searching for more. She doesn’t doubt herself, but in the back of her mind, she recognized that every decision she has made since the day her mother left has been because her mother left her. She has finally accepted who she is fully, and that she is worthy of love and respect as she gives it in return.

She laughed. “You really don’t know me, Ryan. It’s kind of adorable that you think I’m first, here on a vacation, and second, doing this in my spare time. You looked me up, but you didn’t really understand what you read, so let me make myself clear.

“I’m not leaving Cape Haven until I know exactly what happened to my mother. It might take two weeks, a month, a year, or the rest of my life. I have a job, but I don’t need a job. I took a month off, but I will quit NET before I give up this cold case. I have almost unlimited resources and time, and I will use both to find the truth, wherever it takes me. So you can work with me and take advantage of my skills and resources or you can work around me. I guarantee I will learn everything you know and more, and then maybe, when I’ve solved your case, I’ll share what I’ve learned with you.”

Ryan opened his mouth, then closed it and cleared his throat. “I don’t know whether to admire your self-confidence or criticize your ego.”

There is a touch of romance in ABANDONED — it’s far more emotional than I expected. But it’s largely because Max can finally recognize that she is capable and willing to share her life with someone else. There is also heartbreak, surprises, danger, and suspense. I hope you love ABANDONED as much as I do. You can buy it where hardcovers, audiobooks, or ebooks are sold. Links all here on my website.

Thank you for being a loyal reader.